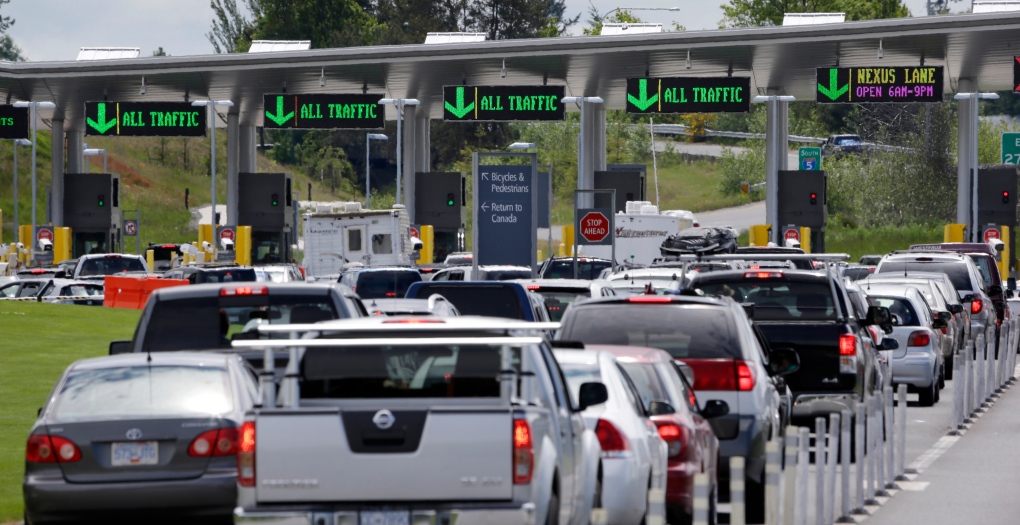 SEATTLE -- By Michael Hill's estimation, 90 per cent of the people pumping gas at his station just south of the U.S.-Canada border in Washington state are Canadians.

Gas north of the 49th parallel, he said, is about $1.30 per gallon more expensive than in the United States. But that's not the only product that Canadians seek in visits to Washington state: Beer, wine and milk are significantly cheaper (beer and wine alone are roughly half the price in the U.S.).

Add a strong Canadian dollar and the result is a key element of the economy in the towns of Whatcom County. For example, the town of Blaine, population just shy of 5,000, generates over $225,000 from a penny per gallon gas tax, which is about 30 per cent of its street maintenance budget.

That's why Hill and others are troubled by the notion of charging a fee to enter the U.S. by land. Last month, in its 2014 fiscal year budget proposal, the Department of Homeland Security requested permission to study a fee at the nation's land border crossings.

"It's a deterrent," said Hill, whose station is fully stocked with wine and has a reader board that says "Thank you Canadians."

"They should be doing anything they can to get them down here to buy more," he added.

That lone request sparked wide opposition among members of Congress from northern states, who vowed to stop it. A fee, they say, would hurt communities on the border that rely on people, goods and money moving between the U.S. and Canada.

"The imposition of such a toll would act as a barrier to the greater economic integration that we seek, and is the absolute last thing we should be doing to grow our economy," stated a letter sent to Homeland Security Secretary Janet Napolitano earlier this month signed by 18 Republican and Democratic House lawmakers.

Democrat U.S. Sen. Patrick Leahy of Vermont is sponsoring an amendment to the immigration reform bill that bars Homeland Security from conducting the study. The senator has also promised to stop any funding for the study. In the House, Democrat Rep. Suzan DelBene of Washington state introduced a bill to stop the creation of a fee.

This week an amendment by Democrat Rep. Bill Owens of New York to stop the study was introduced to the House to the Department of Homeland Security Appropriations Bill.

Lawmakers and people from the southern border, though, did not show such strong opposition, highlighting a north-south divide on how to pay for border infrastructure.

Democrat Congressman Ruben E. Hinojosa, who represents a district in Texas that includes McAllen and its nearby border region, said fees would be good if the revenue stream is used to improve infrastructure.

"I would support crossing fees only if the funds garnered would be used to upgrade our facilities, provide better equipment for our agents, or used for the hiring of more agents at our border crossings," Hinojosa said.

Currently it costs nothing to enter the country by land. Air and sea crossings already have a fee of under $2, which are included in ticket prices.

The proposal would mean creating a pilot program that tests all the steps needed to create a fee collection -- short of actually collecting money. The proposed fee would offset costs of providing border screening and infrastructure. Customs and Border Protection did not specify the cost of the study.

The quick response from northern states lawmakers bolsters the thought that the study won't happen this fiscal year, said Ken Oplinger, president of the Bellingham/Whatcom County Chamber of Commerce in Washington state.

But he thinks that due to the expensive border security measures that have been implemented since Sept. 11, the idea could make a comeback in the future unless other sources of funding not reliant on a border fee appear.

One of busiest northern border crossings - the Peace Arch - is located in Whatcom County. It connects Washington state with British Columbia. In places, the border is just farmland, with no wall or fence and grazing cows. About 12,000 people cross the border there every day, according to CBP figures.

Oplinger has two main concerns. The lesser is people who will refuse to pay the toll and thus stop visiting Whatcom County all together. His greater worry, however, would be any increase to the wait time at the border. He said border traffic has just fully rebounded to pre-Sept. 11 volumes, adding that on summer weekends the wait to enter the U.S. can be as high as two hours. He fears that adding some sort of mechanism to collect the toll would mean more waiting time.

Border fees, albeit local ones, already exist on the southern border. In Texas, local municipalities charge fees to use bridges that connect Mexico and the U.S.

For Kenn Morris, president of marketing research firm Crossborder Group Inc. in San Diego, the future of the border is in public-private partnerships, unless the government acts to improve ports of entry. For example, a private company operates and builds a port of entry, booths and roads, and charges a fee to recoup investments.

"I think that it's inevitable that more border regions use those tools and those who don't want to use it that's they're choice, but they shouldn't take the ability for other regions to at least look at that option," he said. "For those regions that want the ability to charge a fee, we need good analyses to create good policy."

At the nation's busiest border entry at San Ysidro in California, 50,000 vehicles and 25,000 pedestrians go north from Mexico every day. For the past few years, Congress has sent chunks of money to improve the infrastructure. In his last budget, President Barack Obama asked for $226 million to continue the improvements.

In the meantime, people face hours of waiting every day.