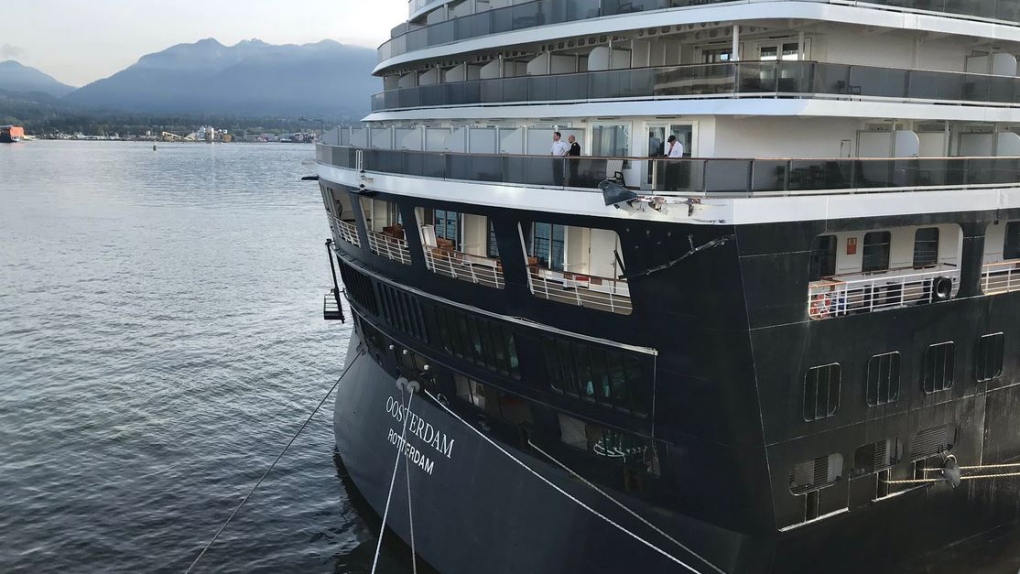 This twitter image shows minor damage on the MS Oosterdam after if collided with another cruise ship at Canada Place on may 4, 2019. (Ken Carrusca / Twitter)

A statement from Holland America, which owns both the Oosterdam and Nieuw Amsterdam ships involved, says the ships rubbed against each other while docking stern to stern.

No one was hurt and passengers were able to leave the ship as planned.

Susan Carrusca, her mother and two friends had just sat down to breakfast on the Nieuw Amsterdam when she felt a jolt.

"We heard a scraping noise," she said. "We could see the other ship, it looked like it was coming towards us. I realize now that it was swinging into its position."

Carrusca had been on a repositioning cruise from San Diego and they were due to leave the ship within the hour, she said.

"When it happened, the captain came on and said 'evacuation, stern of the ship, evacuation,' and so we looked at our server and said 'should we go?' The (staff) were all clamouring to the back to see what was happening."

Carrusca said the captain later announced what had happened, explaining that the Oosterdam hit the rear of the Nieuw Amsterdam and that some passengers who were in cabins near the stern of the ship were not allowed to return.

The Holland America statement says six stateroom verandas on the Nieuw Amsterdam were damaged and repairs were underway.

It says all required repairs were well above the water line and seaworthiness of both ships wasn't affected.

Holland America says the Oosterdam was set to sail overnight to Seattle, while the Nieuw Amsterdam would leave on a seven-day Alaska cruise and neither schedules were expected to be delayed.

The statement says all appropriate authorities have been notified about the incident.

Somebody isn’t having a good day. pic.twitter.com/4r5jMLehw6