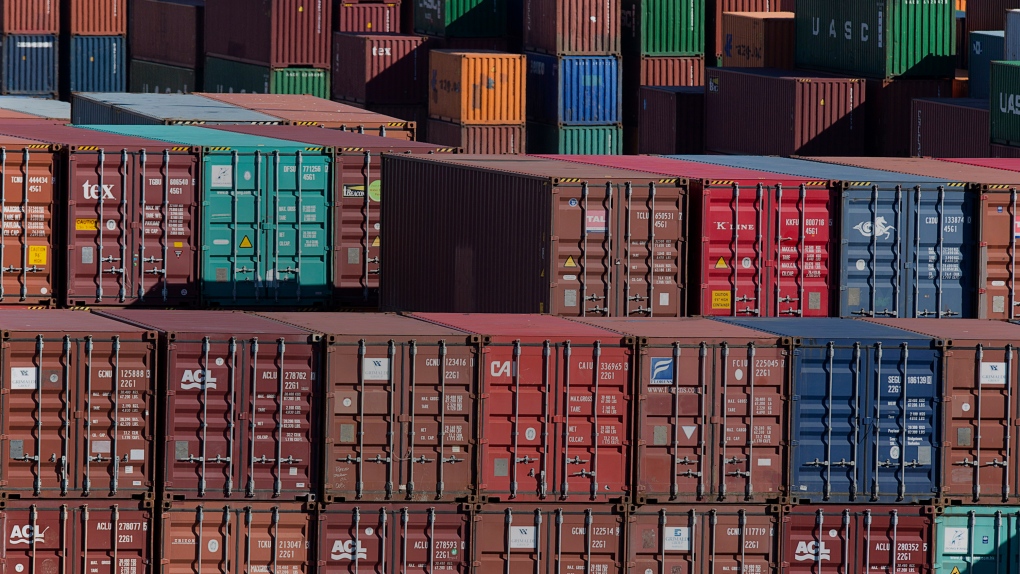 Shipping containers are stacked at the Fairview Cove Container Terminal in Halifax on Friday, Oct. 19, 2018. (THE CANADIAN PRESS/Andrew Vaughan)

HALIFAX -- An offshore tug and supply vessel is en route to a large Halifax-bound container ship burning 1,500 kilometres off the city's coast with plans to tow the vessel to its final destination, the U.S. Coast Guard said Sunday.

All 23 crew members have been evacuated from the Yantian Express, which has been on fire since Thursday.

While heavy winds at sea over the past couple of days prevented extinguishing efforts, Chief Petty Officer 3rd Class Joshua Canup said weather conditions were favourable enough Sunday afternoon to battle the blaze -- though he said the skies may take a turn later on in the evening.

The crew has been moved to the Smit Nicobar, an offshore support tug from Belgium that arrived on the scene Friday night, which is equipped with fire monitors to provide ongoing firefighting support.

Canup said another tug, the Maersk Mobiliser from Newfoundland, is expected to arrive at the ship at around 10 p.m. Atlantic time on Sunday evening, though he was unable to say how long it will take for it to tow the vessel to Halifax.

"The coast guard is continuing to monitor and co-ordinate efforts to help with the situation," Canup said, adding that there is no further information on the status of the fire.

The 320-metre container ship was travelling from Colombo, Sri Lanka, to Halifax on Thursday when a fire started inside a container on the ship's forward deck.

The blaze then spread to several other containers, and coast guard officials in Boston received a call for help early Friday.

A cargo ship from the Netherlands, the MV Happy Ranger, was on scene Friday to offer assistance, but left after the Smit Nicobar arrived.

There were no reported injuries to the eight officers and 15 seafarers aboard the ship, which was built in 2002 and is capable of carrying 7,510 standard 20-foot containers.

On Saturday, a spokesman for international shipping company Hapag-Lloyd, which owns the Yantian Express, said it was still too early to assess damage to the ship or cargo.

"Despite the ongoing firefighting support from the salvage tug Smit Nicobar, the fire has not been extinguished yet," said Tim Seifert in a release Sunday afternoon. "Further developments of the situation on the Yantian Express are being monitored closely, and the firefighting efforts with the salvage tug are ongoing."

He said Hapag-Lloyd is working in "close cooperation with all relevant authorities."