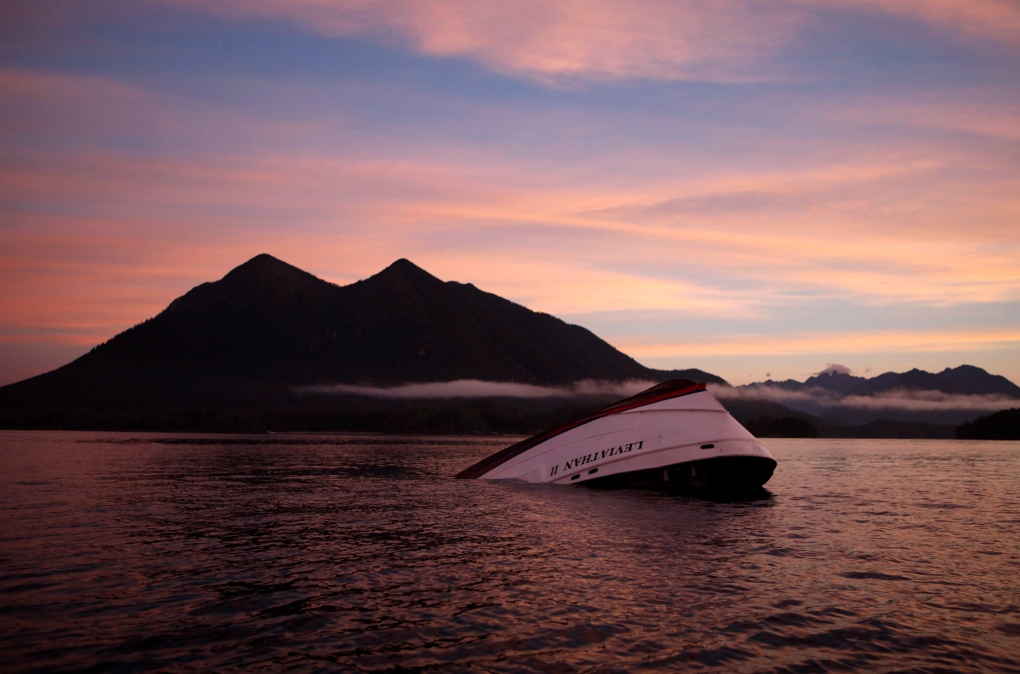 The bow of the Leviathan II, a whale-watching boat owned by Jamie's Whaling Station, is seen near Vargas Island looking towards Cat Face Island as it waits to be towed into town for inspection in Tofino, B.C.,Tuesday, October 27, 2015. (Chad Hipolito/THE CANADIAN PRESS)

VANCOUVER -- The Transportation Safety Board is analyzing cameras from passengers and crew as part of its investigation into a deadly whale-watching accident that claimed six lives near Tofino, B.C.

Five Britons and an Australian died when the Leviathan II capsized last October.

He said the investigation will determine how factors such as sea and operating conditions affected the ship in the moments before a large wave hit the side of the vessel.

The Pacific Whale Watch Association has said rough sea conditions in the area may be a factor, noting a similar fatal accident occurred 17 years earlier in the same waters off the west coast of Vancouver Island.

Krepski said a "survivability assessment" will also be conducted.

"We could look at the location of the passengers aboard the vessel, availability and use of survival equipment, environmental conditions, what any kind of instructions from the crew would have been and determine what the impact may have been on crew and passengers."

The TSB has completed the first round of interviews with crew, passengers and relatives, and follow-up interviews may be done if necessary, Krepski said.

The investigation team is also reviewing the vessel's inspection history and shipyard work orders, as well as information obtained from search and rescue officials.

TSB officials have said that if anything is uncovered suggesting an immediate risk, details will be released right away.

A final report on the tragedy could be years away.

Two other fatal accidents in Canada involving whale-watching vessels killed four people. Both occurred in British Columbia -- in 1992 and 1998 -- with one vessel capsizing and the other sinking.