The changes were, in the prime minister's mind, an "opportunity to put strong performers in important files and continue to demonstrate our capacity to deliver on a broad range of priorities for Canadians," Trudeau said, speaking to reporters after unveiling his changes to the ministerial roster.

The shuffle puts the size of the federal cabinet at 36 members, including Trudeau. This is the largest number of seats around the cabinet table during this government's term in office. The gender balance is retained with the changes.

Trudeau moved minister Jane Philpott into the newly-vacated role as president of the Treasury Board and minister of digital government. This spot needed filling after long-time MP Scott Brison announced last week that he was resigning from cabinet because he will not be seeing re-election in 2019. The main priority of this position is overseeing the federal public service and intergovernmental spending.

Philpott, an Ontario MP, has been seen as a strong performer in cabinet. Trudeau called her a "natural choice" for the new job given her experience as vice-chair of the Treasury Board cabinet committee.

Speaking to reporters outside Rideau Hall, Philpott said that she had enjoyed learning in each new portfolio she's held. This is now her third cabinet post, starting as the health minister in 2015.

Part of her job will be working on the incoming new public service pay system to replace the problem-plagued Phoenix software.

"I can assure the public service that I will put my full attention behind making sure that that is implemented in the best possible way and expedited in terms of the rollout plan on that."

Philpott's new job meant there was a vacancy in the role as Indigenous services minister, a cabinet post created in 2017 as part of an effort to reset the nation-to-nation relationship with Indigenous people.

That job has been given to Newfoundland MP Seamus O'Regan, who is being shuffled out of the Veterans Affairs portfolio, a job he's had since joining cabinet in that same 2017 shuffle.

He'll be continuing the work on delivering programs to First Nations, Inuit and Métis people, including education and housing, as well as chipping away at clearing the drinking water advisories in First Nation communities.

Asked to comment on why O'Regan was moving, Trudeau said that both his past role and his new one are centred around direct delivery from the government to citizens, and that is something that needs to be done right.

O'Regan said his predecessor did a great job and he has big shoes to fill, when it comes to maintaining the relationships and trust she was developing with Indigenous people. He has vowed not to lose any of the momentum of Philpott’s tenure.

In hot water in recent months, over what some saw as problematic comments comparing his experience to that of veterans, O'Regan said he doesn't want anything he says to serve as a distraction.

"I'm going to be spending an awful lot of time over the course of the next few months listening intently and where I can acting in concert with Indigenous peoples," O'Regan said. 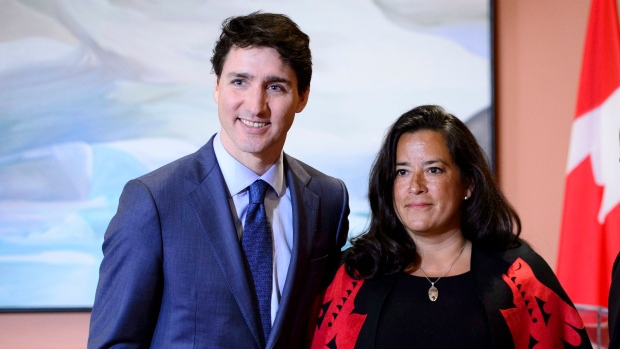 Jody Wilson-Raybould is out as justice minister, a job she's had since 2015, and has been shuffled into the Veterans Affairs job.

Trudeau, responding to why British Columbia MP Wilson-Raybould was shuffled out of justice, said that serving veterans affairs requires a steady hand and she has navigated big files during her years on the file. He called her "extraordinarily capable," and shot down that it's a demotion.

"I would caution anyone who thinks that serving our veterans and making sure they get the care to which they are so justly entitled from any Canadian government is anything other than a deep and awesome responsibility," Trudeau said.

Wilson-Raybould also downplayed any suggestion that her move is a demotion, saying that she is "incredibly proud" of the work she did during her three years in the role. She said she feels she accomplished most of her mandate letter tasks, from legalizing cannabis and putting in a new regime for physician-assisted dying, to advancing legislation to reform the criminal justice system.

Though, in a lengthy follow-up statement to her constituents about the shuffle, she reflects on her time as the first Indigenous federal justice minister in Canada and said there is still work to be done before the government fulfills its promises to Indigenous people.

In it, she also said she has received many questions about why she was bumped from the justice portfolio, to which she says she "will not be commenting."

"In our system, decisions regarding the appointment of cabinet ministers are the prerogative of the Prime Minister," the statement said. 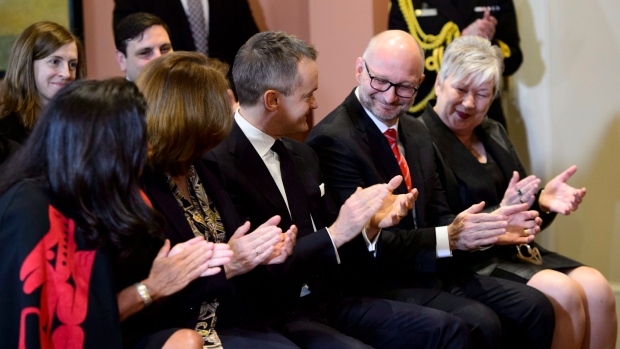 Replacing Wilson-Raybould as Canada's new justice minister and attorney general is Quebec MP David Lametti, who had been serving as a parliamentary secretary for innovation.

Lametti, who in his new position will have the final decision on the extradition of Huawei executive Meng Wangzhou, said he wouldn't comment on the case given that he has yet to briefed, and because of his potential involvement in the future, but asserted that Canada is a rule of law country and he will respect that.

More broadly, the former McGill law professor said he hopes the experience he's had working as a parliamentary secretary for both Navdeep Bains and Chrystria Freeland when she was international trade minister will rub off.

First elected in 2015, Lametti said he's not sure how much law-making he'll be able to accomplish before the end of this Parliament in June.

"What is possible, what the parameters will be of what we can accomplish over the next eight months will depend on conversations with the prime minister, with other members of cabinet, with members of caucus," Lametti said. "I love the law… I have done my best to teach and to think about the ways in which law has an impact on our daily lives and I’ll continue to do that," he said.

Keeping in mind regional representation, Trudeau has promoted Nova Scotia MP Bernadette Jordan to cabinet in a new role, as minister of rural economic development. She had been serving as a parliamentary secretary for democratic institutions.

In this newly created cabinet position Jordan will be responsible for overseeing a new rural jobs strategy, implementing high-speed internet to more rural areas, and handling the infrastructure needs of these communities.

She said the creation of this position is a reflection of the government acknowledging that the reality for rural Canadians is often different than those who live in urban areas and she will prioritize addressing issues people in rural areas are facing. 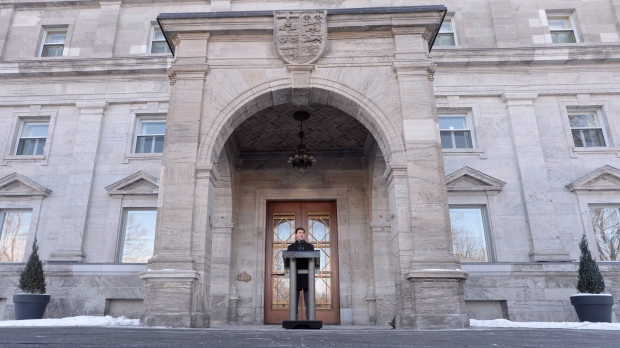 Come the campaign, governments make an effort to have strong representatives like cabinet ministers from every region of the country, and more in areas seen to be key to gaining or maintaining support. Until then, it will be on these ministers to fulfill the outstanding 2015 campaign promises and mandate commitments that Trudeau and the Liberal Party came into power vowing to complete.

Installing another minister from Quebec and filling the Nova Scotia vacancy left by Brison was also likely a factor Trudeau and his inner circle considered in making these ministerial changes.

Jordan becomes the first female to represent a Nova Scotia riding in cabinet. She had previously been chair of the Atlantic Liberal caucus. Prior to being elected in 2015, she was a development officer for the Health Services Foundation of the South Shore in Nova Scotia.

"We're committed to holding all 32 seats in Atlantic Canada. I am extremely proud to have this position and to work with my colleagues to make sure that’s a reality in 2019," Jordan said.

"Since 2015 Bernadette has been a strong voice … She will be a great addition to our team. Now, the Minister of rural economic development is a new cabinet position and it will play a major role in the lives of rural Canadians and their families," Trudeau said, adding that rural issues are often heard by members of the government as they travel the country.

Lametti is the eighth minister from Quebec, and he also fills what some had criticized as a glaring vacany: an Italian-Canadian in cabinet.

Both of cabinet's newcomers are married with three children.

Pending further unanticipated departures, many see this as likely the last shuffle before the next federal election, meaning that this lineup will likely be the roster of ministers that Trudeau wants to have in place for the 2019 campaign.

Speaking to how the coming election factored in to Monday's changes, Trudeau said the shuffle is "an illustration of the depth of bench strength" that his majority caucus holds. "We're very excited about being able to show how we step up as a team," he said.

As it stands, 12 of the current cabinet ministers are in the original positions they were appointed to in 2015, or have very similar positions with a few modifications, another dozen members were not on the first cabinet roster but have been added in over the years; with the remaining 11 (excluding the prime minister) being members of the original cabinet that have been moved into different roles over the course of this government.

Opposition chimes in on cabinet changes

Reacting to the shuffle during a press conference at the National Press Theatre, Conservative MP Pierre Poilievre classified these cabinet changes as shuffling the deck chairs on a "sinking ship," and criticized Trudeau for not taking out what his party views as failing finance, energy, and immigration ministers.

"Absolutely baffled that Jody Wilson-Raybould was moved. She was strong in justice," tweeted Green Party Leader Elizabeth May. She questioned that with Philpott moving too, "is this a sign Trudeau is demoting indigenous issues?"

Instead of commenting on the nuance of the changes, People's party Leader Maxime Bernier took aim at Trudeau's gender parity.

"When I choose my ministers, it won't be on the basis of their gender, ethnicity, or age, but of their experience, competence and abilities to best serve Canadians," he tweeted.