Trudeau celebrates St-Jean-Baptiste day in Montreal with his family 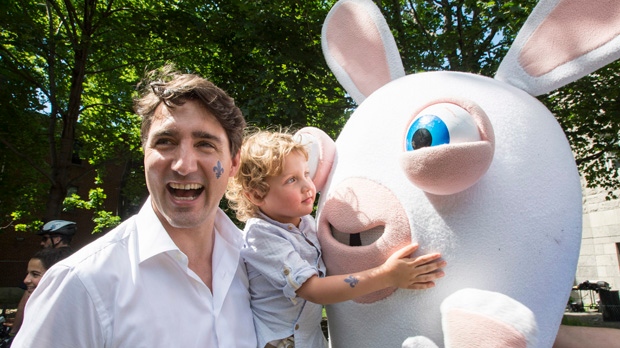 Hadrian Trudeau hugs a rabbit while in the arms of his father, Prime Minister Justin Trudeau at a street party for the Fete National du Quebec, Saturday, June 24, 2017 in Montreal. THE CANADIAN PRESS/Paul Chiasson

MONTREAL -- Prime Minister Justin Trudeau was among the many people attending Fete nationale celebrations in Quebec on Saturday.

Trudeau was mobbed by crowds as he visited a street party in his Montreal riding with his wife and three children.

The prime minister posed for selfies, stopped for lemonade and beer, and chatted with numerous constituents during the 90-minute visit.

In a statement, he said the annual June 24 holiday is an opportunity to celebrate the French language and Quebec culture.

There was some controversy over a float in Montreal's traditional parade Saturday.

The float was pulled by young black men and footage posted on social media prompted some people to link the images to slavery and to speak of a lack of diversity in the parade.

But Maxime Laporte, head of the Societe Saint-Jean-Baptiste de Montreal, which organized the event, rejected the charges as "unfair" and "exaggerated."

He said it was pure chance that blacks were pulling the float.

The students were recruited from the Louis-Joseph Papineau school's retention association and Sterve Lubin, head coach of the school's football team, said he never saw the controversy coming and suggested the students were happy to take part.