OTTAWA -- Prime Minister Justin Trudeau has appointed Montreal-born Richard Wagner, a self-proclaimed advocate of judicial independence, as the next chief justice of the Supreme Court of Canada.

Former prime minister Stephen Harper named him to the Supreme Court only five years ago, and Wagner has another 15 years before mandatory retirement to define his legacy as chief.

Wagner's age may have given him an edge for the job over Rosalie Abella, 71, who was widely seen as the other leading contender for the position. Trudeau had been under pressure to name a Quebecer as chief, in keeping with the tradition of alternating between a civil code jurist from Quebec and a common-law one.

The current chief justice, Beverley McLachlin, is stepping down Friday after 28 years on the court, including almost 18 years as chief. McLachlin, 74, is the first woman to hold the top job on the high court and also Canada's longest-serving chief justice. 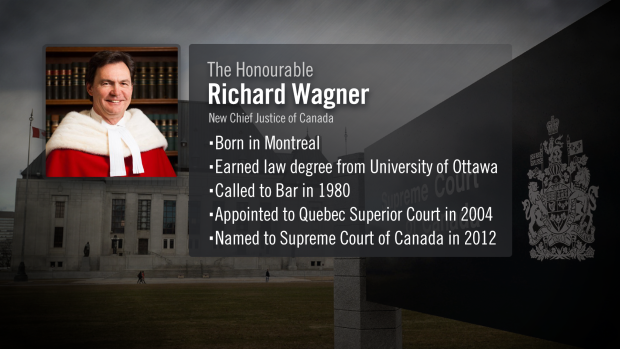 Wagner is slated to take the oath of office as chief justice next Monday.

In a statement Tuesday, Trudeau said he has the utmost confidence in Wagner's ability to lead the court.

"The judiciary, the legal profession, and all Canadians will be well served by his dedication to upholding the laws and Constitution upon which this country is founded," Trudeau said.

The chief justice fosters decision-making by consensus on the court, holds many leadership and administrative responsibilities and represents the Canadian judiciary at home and abroad, the Prime Minister's Office noted.

Wilson-Raybould praised McLachlin as a galvanizing force on the court who served as an admirable ambassador, adding Wagner has many of the same qualities.

"He is known for his collegial nature, being able to get along with people, and this is particularly important in terms of the highest court of the land," Wilson-Raybould said.

"As the chief justice, Beverley McLachlin leaves incredible shoes to fill, and I think that there are similarities but I'm confident that Justice Wagner will chart his own path, and it will be a positive path for the Supreme Court."

Wagner is a firm believer in the independence of judges, once saying that "the judiciary is only accountable to the person subject to trial."

He has long been familiar with the glare of publicity as the middle child of former Quebec Liberal cabinet minister and one-time federal Conservative leadership candidate Claude Wagner.

Controversy ensued last summer after Wagner denied four LGBTQ groups an opportunity to intervene in a case about a Christian law school. Notably, the judge took the rare step of explaining his decision to a newspaper reporter, insisting he was not trying to exclude voices.

"He doesn't seem to be afraid to engage in the public sphere. We'll see if that continues as chief," said Carissima Mathen, a vice-dean of law at the University of Ottawa, Wagner's alma mater.

Wagner's rulings have leaned to "the more conservative side" on matters of criminal law, noted Mathen, who has provided advice to the Prime Minister's Office since 2016 concerning Supreme Court appointments.

For instance, he was in the dissenting minority on high-profile decisions that struck down mandatory sentences for certain gun crimes and established timelines for completion of criminal trials to ensure fairness to the accused.

However, Wagner has signed on to charter-related high court judgments striking down key elements of Canada's prostitution laws and the prohibition on doctor-assisted death.