Trudeau answers call of women boxing to reclaim their bodies 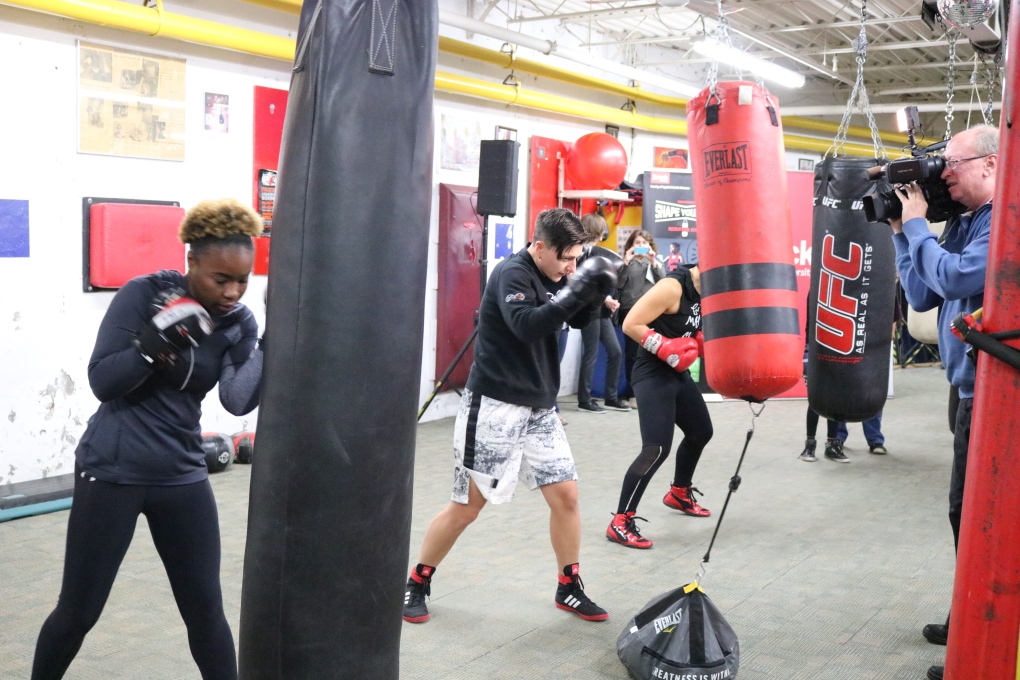 A Toronto boxing gym that provides training for women who have experienced violence has issued a challenge to the prime minister, who also knows his way around a ring.

The Shape Your Life program, a recreational boxing program run by the Toronto Newsgirls Boxing Club, recently posted a YouTube video in which they invited Prime Minister Justin Trudeau to tour the gym – and to bring his boxing gloves. Trudeau is well-known for practising boxing as part of his workout regime.

The women behind Shape Your Life, which is designed to empower women and transgender people who have experienced violence, had reason to celebrate, and they wanted to get the prime minister in on it: On Nov. 25, Canada’s Public Health Agency announced it would be funding more than $420,000 for Shape Your Life to evaluate the effectiveness of the 10-year-old recreational program, with one of the goals being to create a “manual” of sorts for others seeking to provide similar programs.

The playful YouTube video elicited a response from Trudeau himself, who said in a congratulatory video message that while he couldn’t join them for the funding announcement, he looked forward to training with them soon.

@newsgirlsboxing I’m sorry I couldn’t be there today. I’m in your corner & hope to train with you soon! À bientôt. pic.twitter.com/AiZtkAUsDS

The response from Canada’s top politician is a testament to the program, which was created in 2007 by Brock University kinesiology professor Cathy van Ingen, boxing coach Savoy Howe, who runs Newsgirls, and Opportunity for Advancement, an organization that works with marginalized women in Toronto. Howe founded the Newsgirls program in 1996 as women-only classes in other gyms. She opened their current permanent home in 2006.

Through Shape Your Life at Newsgirls, women and transgender people who have experienced violence can sign up for the free program, which also provides TTC tokens and free snacks. The boxing club meets once a week for two-hour sessions and is designed for beginners, who can learn how to box in a safe and supportive environment.

Since then, the recreational program has helped more than 1,200 participants, including Tania Jivraj. Ten years ago, Jivraj was a new mother struggling with post-partum depression. A survivor of violence, Jivraj signed up for the then-pilot program.

“I was just feeling overwhelmed and really unsure of myself,” she said in an interview with CTVNews.ca. Boxing, said Jivraj, was a “transformative” experience at Newsgirls, and started her on a path to “rediscover” her body on her own terms. “It’s impossible to hit a bag for three minutes straight and not connect to your body,” she said.

As she became physically stronger, Jivraj says began to realize that she didn’t exist “for other people’s consumption.

Jivraj, who is now project co-ordinator at Shape Your Life, adds, “it’s about what I want for myself as opposed to trying to please, placate some random idea of what a woman should be and look like.”

Boxers in the recreational program mostly exercise with heavy bags, and other equipment. They don’t spar with each other, but can get into the boxing ring with an experienced trainer for a three-minute round.

The beauty of the program, says van Ingen, is that it gives women who have experienced violence more options beyond talk-based therapy.

“They get this moment where they transform this physical experience that will directly contradict the helplessness collapse that their body might feel during violence trauma, the rage that they feel,” van Ingen said in an interview with CTVNews.ca. “They get a moment of self-mastery.”

Jivraj explains further: “When you’ve experienced violence, choice has been removed from you. Something’s happened to your body, to your mind, to your soul without your consent.

“And when you’re being violent or aggressive in the gym, you’re choosing that.”

Though van Ingen and her colleague, Brock University associate professor Kimberley Gammage, have been tracking the impact of the program through participants’ personal stories, the three-year federal grant will give them an opportunity to examine more closely aspects of 225 participants’ lives, including their self-esteem, resilience, and evidence of post-traumatic stress disorder.

Jivraj says if anything comes from the federally funded research, she hopes it’s more programs like Shape Your Life, whether it’s karate classes, boxing or some other form of physical activity.

“Something physical where women can be strong and … “where we can show the world, ‘No, we’re not just your punching bag, actually, we know how to hit a punching bag.’”