Toxic shock syndrome caused the death of a British Columbia teen found lifeless in bed on a school trip, according to a report from the province’s coroner service.

In March 2017, Grade 11 student Sara Manitoski was on an overnight outdoor education trip on Hornby Island, off Vancouver Island.

According to a report from the BC Coroners Service released on Monday, Manitoski’s friends thought she was sleeping when they left their cabin without her for breakfast. When they returned, Manitoski was still in bed, even though her alarm was going off.

The report points to a strain of staphylococcus aureus on a tampon found in place, as well as other symptoms consistent with toxic shock syndrome. The report notes that tampon use is not the only cause of toxic shock.

“We know there is an association. And again, it’s very rare,” Island Health Medical Health Officer Dee Hoyano told CTV Vancouver Island on Monday. “Certainly we know a person needs to have this particular bacteria to get sick, and then there may be something with tampon use, maybe prolonged tampon use, that puts that risk higher for developing a more widespread infection.”

According to Health Canada, toxic shock syndrome occurs when toxins made by certain strains of Staphylococcus aureus bacteria (Staph) get into the bloodstream.

Island Health said it encourages people to educate themselves about the safe use of tampons. 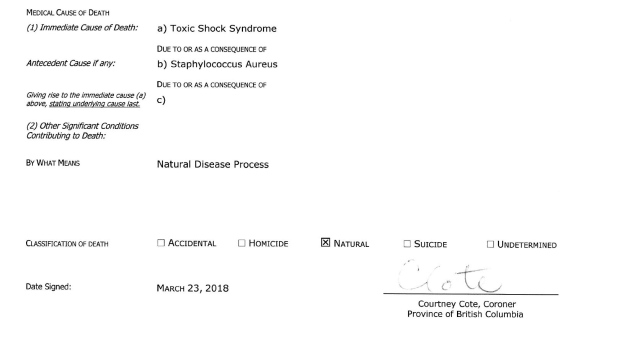 With a report from CTV Vancouver Island’s Amber Schinkel