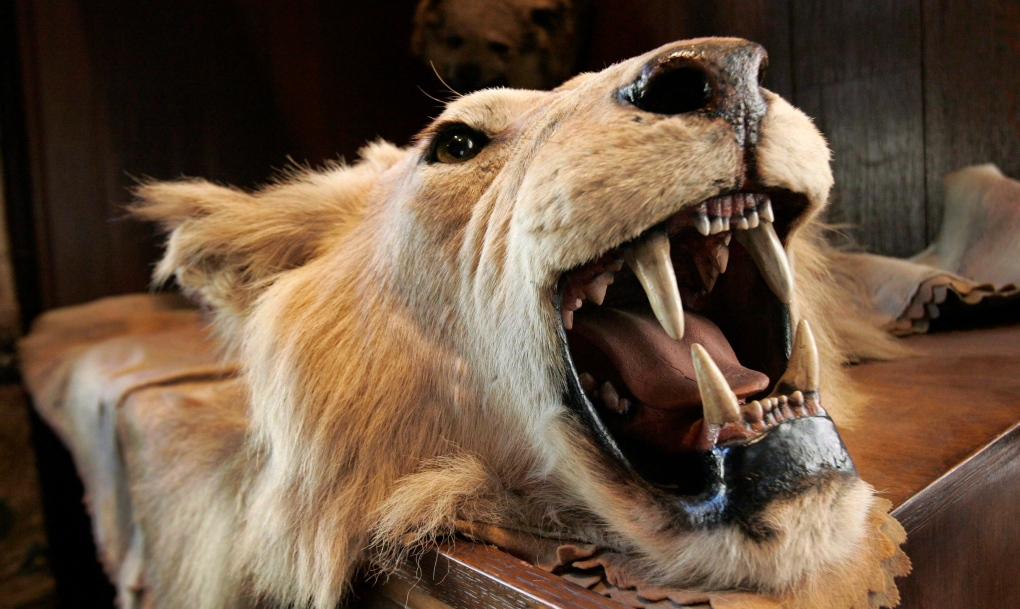 In this file photo taken Wednesday, Jan. 23, 2008 a lion's head and skin from an East African safari expedition donated to The Explorers Club sometime between 1908 and 1910 by former U.S. president, big game hunter, conservationist and adventurer Theodore Roosevelt, decorates a surface in the club's trophy room in New York. (Kathy Willens / AP)

TORONTO -- Finding a venue has been a major problem for an African trophy hunting show expecting to bring hundreds of hunters from across the globe to the Toronto area this weekend.

Birgit Johnstone, who owns African Events Canada, says news of the cancellation by Borgata came as nearly 30 of her exhibitors were setting up their booths after flying in from Africa.

Johnstone says Borgata's owner told her it was cancelling the event space for safety reasons. Borgata said in a statement on Facebook that it had decided to cancel its agreement with African Events but declined to give a reason.

Johnstone says the two-day event -- now scheduled for an undisclosed location in Vaughan -- will offer attendees opportunities to book trips to Africa to hunt animals such as lions, leopards, elephants and hippopotamuses.

"It's critical that companies refuse to play any role in the senseless slaughter of majestic African animals," Labchuk said.

"If trophy hunting is so hugely unpopular that the organizers feel they have to hold a secret event, perhaps that's a sign they should get into a business that isn't built on the brutal killing of innocent animals," she said after learning that the new location hadn't been made public.

African Events Canada has been "up front about the nature of our show and I have been open with the activists about trying to educate them about hunting in Africa," Johnstone said.

"I'm thankful we found a new place," she said, noting it may be hard to get the word out to her customers.

Friday's cancellation wasn't the first the show has faced.

Johnstone said protests from Animal Justice resulted in a Holiday Inn near Toronto Pearson International Airport, where the show was originally scheduled to take place, cancelling the booking.

Animal Justice had previously launched online petitions against the event and has vowed to protest outside the venue if organizers go ahead with the show.

"Trophy hunting brings in more money than plain meat hunting because you have the trophy hunter who pays for his trophy, pays for accommodation, pays for his flights, pays staff tips, pays for other excursions in the country and taxidermy work and that's just him," Johnstone said.

Without trophy hunting, she said, the locals would turn to poaching to earn a living.

"It's hard to know where to start. If they're serious about wanting to protect animals they should start by not killing them," she said.

African Events Canada had to find a new venue for a second show set for Saskatoon on Jan. 23-24 after a similar petition by Animal Justice led to the cancellation of the event by the Saskatoon Inn, Johnston said. A third show is scheduled to take place in Calgary on Jan. 30-31.

Trophy hunting has come under the magnifying glass after a worldwide uproar over the death last summer of Cecil the lion, a famous animal in Zimbabwe that was killed by an American after it was lured out of a national park.