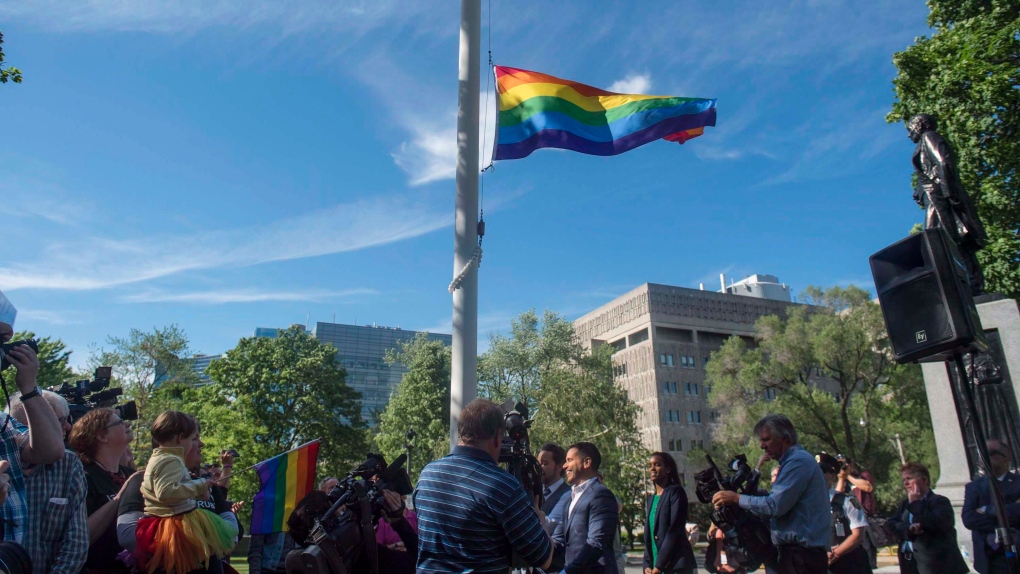 A rainbow flag is raised at Queen's Park at the annual Pride flag raising ceremony at the official launch of Pride Month, in Toronto, on Wednesday, June 1, 2016. (THE CANADIAN PRESS/Eduardo Lima)

TORONTO -- Each year, Toronto's Pride festivities wrap up with a bang -- the bright, colourful, loud Pride Parade. But two days before, there's a more sombre event -- the annual Trans Rally and March.

And while members of the transgender community have been welcomed into the larger fold of Pride -- including the finale parade -- the march is still a necessary event, said organizer Rachel Lauren Clark.

It's important both because of the differences between gender identity and sexual orientation -- gender identity refers to whether a person identifies as being male, female, neither or somewhere in between, whereas sexual orientation is about the gender that people are romantically and sexually attracted to -- but also because of the discrimination that transgender people still face, Clark says.

This year is Clark's second year as part of Pride Toronto's board of directors, and her third participating in the trans march. Before that, she said, she hadn't completely come out as a transgender woman.

In part, she said, she hadn't come out because of the barriers that transgender people face.

She said she worried: "'Walking down the street, would my boss see me?"'

"Even in 2009 (when the first Trans March took place), you could lose your job for being a trans person," she added.

So she decided to come out when she was between jobs, to avoid some of the challenges of transitioning while working in an office.

But that had its drawbacks -- she said finding work as a visibly transgender woman was difficult. She had 15 years experience in computer sciences, but managers hiring employees didn't look at her resume, they just looked at her.

Healthcare was also a barrier -- her doctor was great, she said, but she didn't always know the answers to Clark's questions about her health.

And the third major barrier was housing. If you can't find steady work, it's hard to find steady housing. Moreover, she said property managers and landlords were hesitant to rent to marginalized groups.

This year has been something of a landmark year for transgender rights in Canada. In addition to the new federal bill, Nova Scotia introduced workplace inclusion guidelines for transgender people. Quebec's government has tabled a bill to help transgender teens change their names, and Ontario will allow for a gender neutral health card.

But there are still barriers, Clark said.

And so-called "bathroom laws" in the U.S., which prevent trans people from using the bathrooms that correspond with their gender identity, have spurred on a bout of very public transphobia.

"I think (transphobia) exists everywhere in the world, and Canada isn't immune to that," Clark added. "I've heard it myself, and I know my siblings in my community have heard it a lot."

So, she said, people need to keep fighting against discrimination and against fear and hatred.

"Until we achieve true equality, there will always be a need for a Pride Parade," she said.