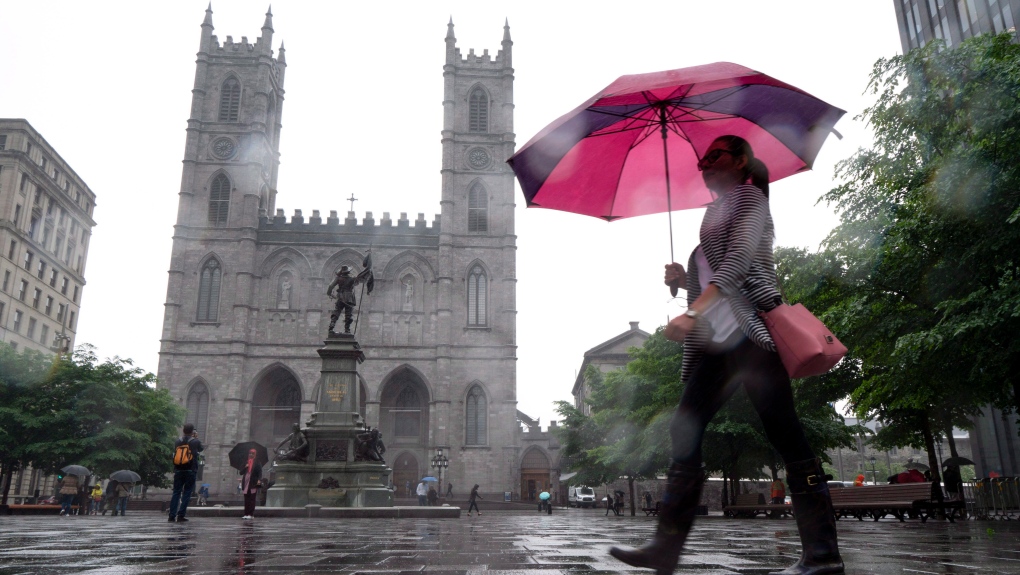 A woman walks past the Notre Dame Basilica during a light downpour in Montreal on Thursday, June 14, 2018. (THE CANADIAN PRESS/Paul Chiasson)

TORONTO -- A Roman Catholic priest's sexual abuse of an 11-year-old altar boy more than 50 years ago warranted an award of more than half a million dollars in compensation, Ontario's highest court ruled on Tuesday.

In reaching its decision, the Court of Appeal rejected arguments from the Toronto diocese that the victim's lawyer had inflamed the jury with closing comments.

However, in a split decision on one part of the appeal, the court set aside the jury's award of $15,000 in punitive damages, saying the Toronto diocese did nothing wrong in refusing to admit liability until after the trial started.

Court documents show the boy was raised in a devout Catholic family who believed a priest, as "God's representative," was to be respected and obeyed. In 1963, newly arrived priest, Father Alphonse Robert, befriended the 11-year-old's family, and ended up inviting him on a trip to visit the Basilica of Notre Dame in Montreal.

According to agreed facts, Robert arranged to spend the night in a motel room in Cornwall, Ont., where the priest fondled the boy sexually and performed a sex act on him.

The boy came to believe the incident was his fault and that he was "damned to hell," court documents show. The result was decades of difficulties with family relationships and alcoholism.

The victim sued the parish in 2014, by which time Robert had died. He sought various damages for mental distress and loss of income, as well as punitive damages.

The church, which spent years denying liability, admitted fault on the opening day of the jury trial before Superior Court Justice Gordon Lemon. As a result, the only issue at play was the amount of compensation.

The diocese appealed. Among other things, the church argued inflammatory closing comments from the plaintiff's lawyer led to a miscarriage of justice that required a new trial. Those comments included the lawyer urging jurors to identify with the victim as an 11-year-old and to "do the right thing."

The Appeal Court rejected the arguments, saying the judge's instructions to the jury -- including about the comments -- were fair, and that the damages award was reasonable and supported by the evidence.

"I note that the impugned statements came at the conclusion of a 16-day trial, which was devoid of any allegation of inflammatory comments to the jury," Justice Mary Lou Benotto wrote for the court. "The jury was not acting out of an impermissible sense of outrage caused by the closing submissions of the respondent's counsel."

On the sole issue of $15,000 in punitive damages, Benotto found herself off-side with her two appeal-panel colleagues, Justice Lois Roberts and Chief Justice George Strathy.

Benotto said she would have let the award stand as "symbolic condemnation" of the diocese's "uniquely egregious" conduct in only admitting liability after the trial started.

"There was specific evidence that (the victim) was suffering physically and mentally during the time that the appellant was denying liability," Benotto wrote in her dissent.

However, in quashing the punitive damages award, the majority said the church was entitled to deny liability as long as it did. Exercising its litigation rights could not be characterized as egregious misconduct, Roberts wrote for herself and Strathy.