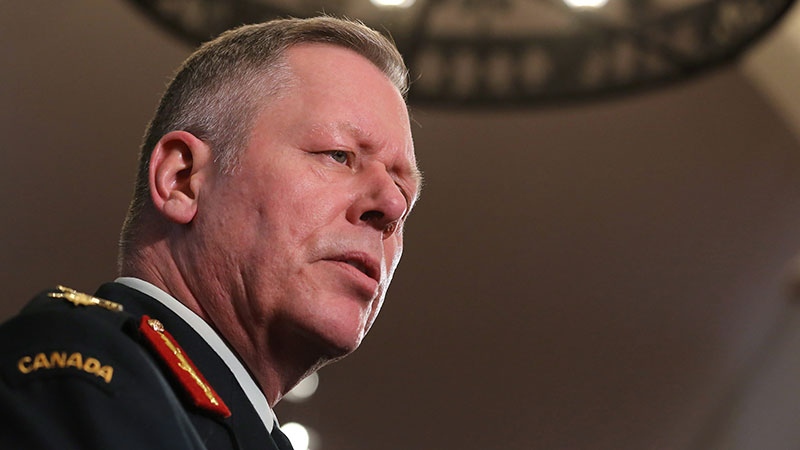 OTTAWA -- The country's top soldier has pushed back on suggestions the armed forces is struggling from a lack of cash, saying he's not convinced it is making the most of the money it already gets.

Yet chief of defence staff Gen. Jonathan Vance says he is also eager to see the government's new defence policy, which has promised to put the military on a strong financial footing over the long term.

"The here and now is fine, we're delivering," Vance said in an interview with The Canadian Press. "But going forward, that's when the government committed to sustainable, progressive armed forces."

The question of military spending has taken on a life of its own over the last year, after U.S. President Donald Trump called on NATO allies to contribute more to their own defence.

Canada currently spends about one per cent of its GDP on defence, which is half the agreed-upon NATO target of two per cent and puts it in the bottom half among the allies.

Vance said defence officials asked for the delay because several projects weren't ready for the money, which Defence Minister Harjit Sajjan's office has blamed on a shortage of procurement staff.

"The reprofiling was our choice," Vance said. "I know people have a hard time believing that, but it is true. There's no point giving us billions when we can't spend it."

Officials have insisted the money will be available when it's actually needed in future years.

One of the big questions posed by defence analysts, however, is whether there will be enough money to sustain the military over the long term.

Some have flagged what they see as a gap between the amount of money available for new military equipment in the coming years, and what the government has promised to spend.

Vance noted the government is working on a new defence policy, which is expected in early May and which the budget promised will be rigorously costed and sustainable.

"We're waiting for the defence policy review and that investment," he said. "That's going to be the expression of investment by the government of Canada."

In the meantime, the general said defence officials are looking at the current $19-billion budget to ensure it is being used as effectively as possible.

Vance acknowledged there are some areas of the military that need more money, starting with its crumbling bases, armouries and other infrastructure.

"But my gut instinct right now tells me we have way too much infrastructure in the armed forces for the size that we are," he said.

"We have a lot of buildings that we're paying tax on that we don't use. So before we blame government for a lack of money, we've got to make certain that in-house we are the most efficient we can be."

But space for additional investments looks to be quite limited, at least in the short term, as the budget predicted the federal deficit will stay above $20 billion until 2021-22.