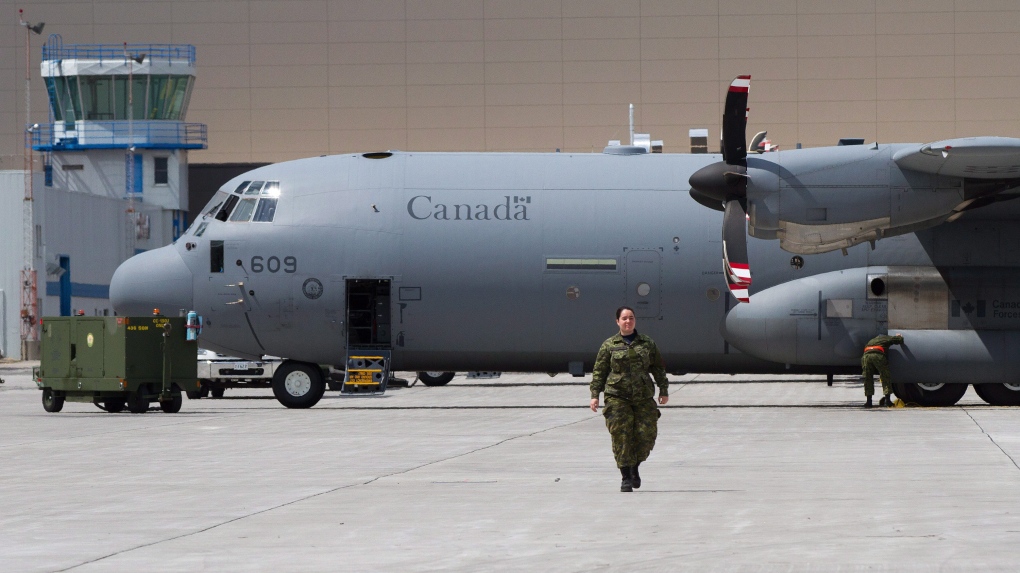 Several CC-130J Hercules transport aircraft sit on the tarmac at CFB Trenton in Trenton, Ont., on Wednesday, May 4, 2016. (Lars Hagberg / THE CANADIAN PRESS)

MONTREAL -- Three men were killed when a plane went down in a remote region of northern Quebec on Friday.

A fourth man aboard the downed float plane was injured but survived the crash near Lac Boulene, southeast of Chibougamau.

The Joint Rescue Coordination Centre Trenton said a Hercules aircraft was dispatched on Friday evening to respond to an emergency locator beacon.

Search and rescue technicians parachuted to the site where they found three people without vital signs and were later pronounced dead.

Capt. Trevor Reid said the fourth man was transported by Griffon helicopter to nearby Chibougamau, about 700 kilometres north of Montreal, for further medical treatment.

Quebec provincial police said the four men were all from Quebec -- friends in their 60s and 70s -- heading to the Chibougamau area for a fishing expedition.

Police did not release the victims' names, but said their families have been notified.

Sgt. Helene Nepton said the only survivor was released from hospital and investigators will meet with him.

"A police helicopter is on its way to the site to retrieve the bodies of the three victims, there's no access by road in the area," Nepton said.

The Transportation Safety Board of Canada said it's aware of the crash, which is believed to have occurred around 4:30 p.m.

TSB spokesperson Julie Leroux said the agency is currently assessing the situation, but were not deploying investigators immediately to the remote area.

Reid said search and rescue teams were nearby conducting a search for a missing Quebec businessman and his son when they responded to the distress call for the plane on Friday evening.

"It was a little bit outside the search area, but they were able to home the emergency beacon," Reid said.