Thousands left out of plan to give workers permanent residency: Migrant Rights Network

TORONTO -- Thousands of migrants and essential workers will be left out of the federal government’s upcoming plan to give 90,000 temporary workers permanent residency, according to the advocacy group, the Migrant Rights Network.

“Permanent resident status for all is a matter of life and death. It is the mechanism through which migrants can protect themselves, and it is essential for a free and equal society,” Syed Hussan, Migrant Rights Network secretariat, said during a virtual press conference on Tuesday.

Hussan, also the executive director of Migrant Workers Alliance for Change, said six migrant farm workers have died this year, and at least six international students have committed suicide as a result of financial and immigration pressures. And he stressed they all need more protections.

The Migrant Rights Network’s report entitled “Exclusion Disappointment, Chaos and Exploitation” is critical of the federal government’s upcoming plan to provide a pathway to permanent residency -- on a first-come-first-served basis -- to more than 90,000 low-skilled, temporary workers.

But the Migrant Rights Network, one of Canada’s largest migrant-led coalitions, said this is inadequate for the estimated 461,470 eligible migrants.

“During this pandemic, millions of people without status have risked their lives to serve you and keep the Canadian economy rolling,” according to Samira, who’s been living with her mother in Montreal for eight years and shared her story in the report.

Samira is ineligible for this program because she’s undocumented. Like some at the presser or quoted in the report, her last name was withheld out of fear of reprisal.

“Why does the government not put in place a regularization program for everyone? It's revolting how all these new laws ignore us -- like we didn't exist. We are here and we will continue to struggle.”

Hussan echoed this and called for full and permanent immigration status for all.

➡️ The current program must be expanded to include everyone without permanent status; all caps and the 6-month window must be removed; residents of Quebec must be allowed to apply. 2/3#StatusforAll #CanLab #CdnPoli #Justice4Workers

“We don’t need small, one-off, exclusionary pilot programs, we need an overhaul of the immigration system so that every resident in the country has the same immigration status and therefore the same access to labour rights, healthcare, and other essential services.”

But the office of Marco Mendicino, Canada’s minister of immigration, refugees and citizenship, pushed back.

“The new pathway to permanent residency for essential workers and international graduates is among the most inclusive and innovative programs ever launched by IRCC,” press secretary Alexander Cohen said in an email to CTVNews.ca. “Its size, speed and scope are unprecedented.”

“From bricklayers to bus drivers to custodians, the range of eligible occupations has never been more inclusive,” he said.

Applications will be open until November, with the government saying it would be open to changes as the rollout goes on.

But based on the restrictions, the Migrant Rights Network’s report claimed that approximately 1.18 million undocumented residents, refugees, current international students, and migrants in Quebec don’t qualify at all.

Those in Quebec cannot apply unless they intend on moving out of the province -- once they gain permanent residency status. The reason is because of the Canada-Quebec Accord, a government source who spoke on background said. The accord, signed in 1991, allows Quebec greater leeway and power in weighing on issues and decisions pertaining to immigrants and refugees wishing to live there.

But the Ministry of Immigration, Refugees and Citizenship Canada has publically stated they’re very open to re-visiting this should the Quebec government choose.

Cohen noted that for some who don’t qualify for this program, there is another.

“Minister Mendicino also recently launched the Guardian Angels program. This ground breaking program was created specifically to offer a pathway for undocumented asylum seekers who’ve contributed so much to Canada’s fight against COVID-19 in our hospitals and long-term care homes,” said Cohen. 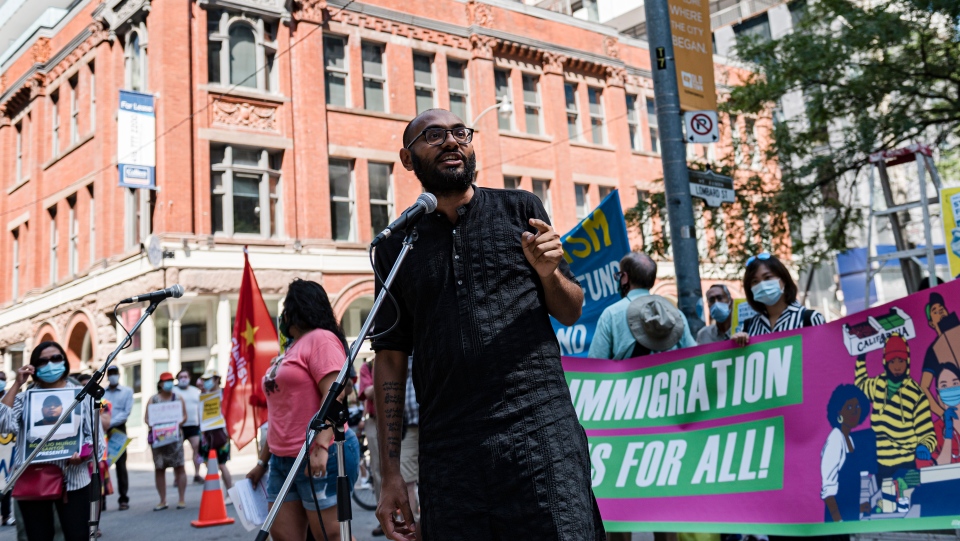 People take part in a demonstration outside Quebec Premier Francois Legault’s office in Montreal, Saturday, Nov. 21, 2020, where they called on the government to give permanent residency status to all migrant workers and asylum seekers.The COVID-19 pandemic continues in Canada and around the world. THE CANADIAN PRESS/Graham Hughes

To put together the Migrant Rights Network report, the group examined 3,000 responses from undocumented workers and migrant workers and found many said they weren’t eligible. They added they neither have the time to take work off to study or take the test, nor do they have the resources required to gather documents for their applications.

The program requires passing a language test in the application but, according to the report, approximately 45 per cent of migrant workers and just under half of the respondents who were international graduates said they haven’t passed or taken the test.

However, applicants can submit language test results from the last two years. But as for the language test requirement itself, a government source who spoke on background said it’s in place because it’s a way to ensure that workers will be able to participate in the broader society, after they gain permanent residency status.

But Hussan estimates that when it came to total costs involved, workers could be looking at upwards of $2,000, when you include the cost of a language test, potential lawyer fees, and consulting immigration experts to ensure their application stands a good chance.

He said this cost is too high, especially for low-paid workers for which English or French isn’t their first language.

'WE HAVE BUILT LIVES HERE'

One of those people who will likely be left out is Gary, a Mexican migrant worker who’s been working in the country since 2013.

“Many of us have taught ourselves English to get by while working in Canada but cannot write or read it. I am excluded from the government’s permanent residency program because I cannot pass the English test,” Gary, a chicken catcher in Ontario, said during the press conference.

“That is not fair - we have built lives here, and we have missed out on our lives with our families,” he said. 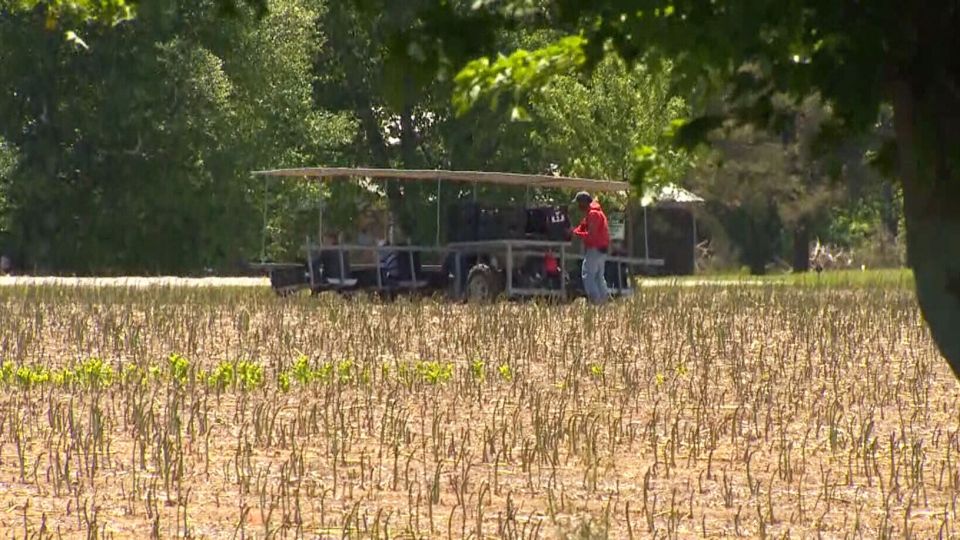 Lisa, a spa worker in Toronto, said she too would be unable to pass an English test and said her job as a sex worker means she doesn’t qualify under the rules, either.

“I'm no different from Canadian, I contribute a lot to the society does. That's why every migrant sex worker and massage parlor workers deserve status,” she said.

Gary noted that he feels extremely vulnerable for another reason.

“We cannot stand up for our rights because the employers always threaten us saying they won’t renew our contracts or will deport us,” he said, echoing what advocates say is happening to many others throughout the pandemic.

Also sharing that fear is Abdoul, who came to Canada on a student visa in 2015, but when it expired he became an undocumented worker and his status means he’s unable to apply, either.

Meanwhile, students feel left out because they haven’t graduated yet or because their school permit is expiring, such as migrant student Aydolu, who’s been studying in Canada since 2019 and has been doing essential work during the pandemic.

“It’s been tough times and my physical and mental health have been affected badly,” the new Toronto graduate said. She has been struggling to make ends meet and wishes the program was more inclusive.

LAID-OFF MIGRANTS LEFT OUT TOO

Approximately one in four current essential workers surveyed said they didn’t meet the job requirement of having worked 12 out of the previous 36 months. Some said they didn’t qualify because some of their work experience took place in between work or student permits and don’t count towards the requirement.

Then, another 13 per cent of those surveyed said they didn’t have valid work authorization. This is in large part because temporary foreign workers who lost their jobs during the pandemic aren’t legally allowed to work elsewhere due to employer-restricted work permits.

Cherrian Snagg, a migrant care worker, said she was fired when she got sick during COVID-19 and was in dire straits because her home, income, health care and ability to stay in the country were tied to her employer.

“Without permanent residency status, you are pushed around - by employers and by the government. This is discrimination and exploitation,” she said during a pre-recorded video during the presser. 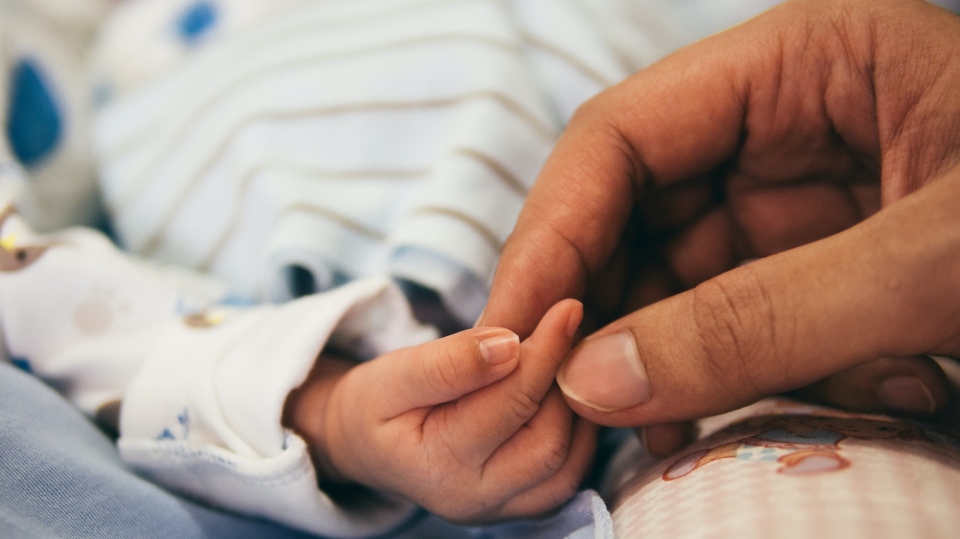 “I struggled to find a new employer to sponsor me, so I could get the last three months of work I needed to meet the 24-month work requirement under the Home Child Care Provider Pilot and be able to apply for permanent residency,” Snagg said.

“Just last week, the cap in that program was reached. Another door has been closed for me and care workers like me. And I can’t qualify for this new program without a job,” Snagg added, noting her immediate focus is getting a job to meet her employer-restricted permit.

The Migrant Rights Network report noted many unemployed essential workers who were laid off due to COVID-19 or fled unsafe working conditions are now scrambling to take any job -- no matter the pay -- just to qualify for the new program.

And worse still, those who left bad employers say they’ve been forced to return to them. It should be noted that those fleeing abuse or unsafe working conditions; or certain students would be eligible for this latest program if they apply for and successfully gain an Open Work Permit.