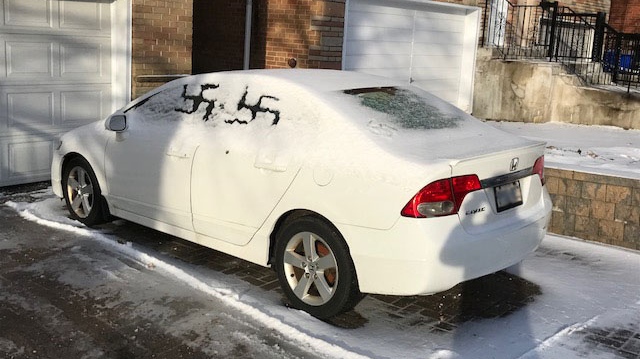 Swastikas can be seen on a snow-covered car in this Jan. 13, 2018, photo. (PeterAkman/Twitter)

Swastikas have been drawn on at least two snow-covered cars in Toronto’s Yonge Street and Eglinton Avenue area, CTV News has learned.

Several of the ignominious symbols were discovered Saturday morning on at least two cars that were parked outdoors overnight on a residential street in the neighbourhood, which has a sizeable Jewish population.

Photos of the defaced cars were sent to CTV National News Toronto bureau reporter Peter Akman. Toronto police say they are investigating the incidents. There was no reported damage to the vehicles.

The swastika is closely associated with Nazi Germany, which was responsible for the systematic murders of up to six million Jews and millions of others during the Second World War.

Today, it is still used by white-supremacist groups.