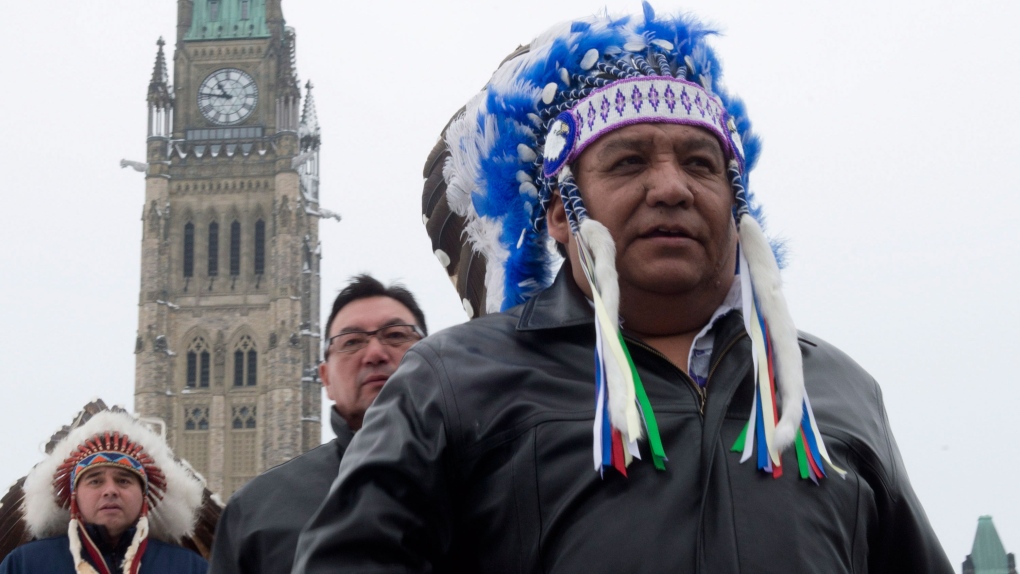 Steve Courtoreille, Chief of the Mikisew Cree First Nation walks off Parliament Hill after speaking about legal action against the federal government in Ottawa, January 8, 2013. (Adrian Wyld / THE CANADIAN PRESS)

OTTAWA -- The Supreme Court of Canada is to begin hearings Monday in an appeal that could force lawmakers across the country to give First Nations a role in drafting legislation that affects treaty rights.

"This case is tremendously significant whichever way it comes out," said Dwight Newman, a law professor at the University of Saskatchewan.

It could "fundamentally transform how law is made in Canada," he said.

The court is to hear a challenge by the Mikisew Cree First Nation in northern Alberta. It seeks a judicial review of changes made under the previous Harper government to the Fisheries Act, the Species At Risk Act, the Navigable Waters Protection Act and the Canadian Environmental Assessment Act.

The First Nation argues that because the changes were likely to affect its treaty rights, the government had a constitutional duty to consult before making them.

Cases on the Crown's duty to consult appear regularly, but they usually concern decisions made by regulatory bodies. This one seeks to extend that duty to law-making.

Janes argues that First Nations are often kept from discussing their real issues before regulatory boards.

"The place to deal with larger issues that First Nations often want to deal with are when the statutes are being designed. If you don't deal with that in the design, the (regulator) doesn't have the tools to deal with the problem when it comes up."

Legislation creating Alberta's energy regulator, for example, specifically blocks the agency from considering treaty rights, which are the root of most Indigenous concerns with energy development in the province.

Ensuring First Nations have a voice when laws are drafted will lead to better legislation, argues Janes.

Not necessarily, says the government.

"At some point, the need to consult in this manner may overwhelm and affect the ability to govern," it says in written arguments filed with the Supreme Court.

Ottawa argues that allowing the appeal would be a far-reaching intrusion by one branch of government into the work of another and that it is "not the courts' role to impose restrictions or fetters on the law-making process of Parliament."

There's nothing that prevents governments from consulting First Nations when laws are drafted, federal lawyers say. But they argue that forcing them to give Indigenous representatives a seat at the table diminishes Parliament, which is supposed to be the most powerful body in the land.

It would also put more value on some rights than others, giving treaty rights preference over charter rights.

The appeal is being closely watched. Five provincial attorneys general and seven Indigenous groups have filed as interveners.

Whichever way the Supreme Court decides, it will be "amongst the most significant duty-to-consult cases that have been decided," he said.

"Altering the parliamentary process itself contains dangers. It's a delicately balanced process that's been developed over hundreds of years and I don't know if we can predict all of the effects of putting in additional judicially developed requirements."

"If you're going to talk about reconciliation ... it doesn't make much sense to say we're just going to let one side make the rules and we're only going to have a conversation afterwards."