A group of Ottawa-area high school students are deploying to northern France this month on a mission that will follow in the footsteps of the young men who fought at the pivotal Battle of Vimy Ridge nearly 100 years ago.

Before leaving, the Ottawa Catholic School Board students spent Saturday tying 3,598 yellow ribbons to Ottawa’s Vimy Memorial Bridge -- one for each Canadian soldier who died in the April 1917 attack. Each ribbon had been decorated with poppies and inscribed with messages of thanks and remembrance from elementary school students.

The four-day Battle of Vimy Ridge is considered a defining moment in Canada’s history. It was the first time all four Canadian divisions fought side-by-side and they managed to achieve victory in a place where British troops had struggled.

Grace Cosgrove is one of the 200 planning to mark the battle’s 100th anniversary in France at the Canadian National Vimy Memorial.

The official Canadian delegation travelling to France will include Prime Minister Justin Trudeau and Governor General David Johnston. They will be joined by Prince Charles, Prince William and Prince Harry, as well as other dignitaries, veterans, and members of the Canadian Armed Forces. The ceremony will also include a replica biplane flypast by a team of dedicated volunteer pilots and builders known as Vimy Flight.

“It’s going to be amazing to see,” said one of the Ottawa students. “I’m really excited to go and just be there and be a part of it.”

Teacher and trip coordinator Julian Hall says it will be an experience they won’t forget.

“It’s very important for them to learn about how important Vimy Ridge was,” he said. “The forming of a nation so to speak.”

With a report from CTV Ottawa’s Annie Bergeron-Oliver 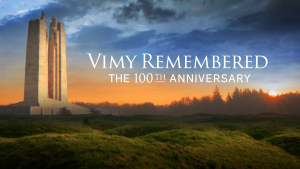