Hours after Quebec Premier Pauline Marois declared that student unrest is “behind us,” thousands of protesters took to the streets of Montreal to denounce a planned three-per-cent tuition fee hike.

At least 10 arrests were made Tuesday as some protesters hurled snowballs and bottles at riot police.

The demonstration, organized by the radical student group ASSE, was quickly declared illegal because the protesters did not provide police with their planned route in advance – a requirement under municipal law.

Student leaders said they felt betrayed by Marois, who wrapped up a two-day summit on higher education by announcing a plan to increase tuition by $70 per year, or roughly $350 over the first five years.

Marois’s Parti Quebecois government had nixed the previous Liberal government’s efforts to raise the tuition fee by $1,625 over five years – a plan that sparked sometimes violent protests in Montreal, Quebec City and other parts of Quebec last year.

Many believed that PQ would keep tuition fees frozen, but the government said a slight hike was necessary to keep up with inflation.

Many student groups rejected that notion and ASSE, which boycotted the education summit, demanded free tuition across the province during Tuesday’s protest.

Some downtown streets were blocked off and buses were re-routed as police tried to break up the large demonstration into smaller groups. It wasn’t immediately clear whether any of the protesters who were arrested will face criminal charges.

Earlier in the day, Marois said the province had succeeded in quelling the confrontations with student groups.

“The social crisis is behind us,” she said in her closing address at the education summit.

After some intense clashes with police, most of the protesters dispersed by 6 p.m. local time, CTV’s Montreal Bureau Chief Genevieve Beauchemin reported.

Regular nightly demonstrations are also being planned for next week, but it’s not yet clear how many student groups will join in.

Eliane Laberge, president of the Federation of Quebec College Students, told CTV News Channel that members of her group were not taking part in Tuesday’s protest.

The federation was present at the education summit and wants to remain open to discussions with the government, Laberge said.

However, “there was a bit of deception on the question of tuition fees,” because it was believed the PQ government would freeze them, she said.

Antonia Maioni, a political science professor at McGill University, pointed out that PQ’s three-per-cent annual tuition hike would be perpetual, unlike the Liberals’ five-year increase.

“The students have said that what they feel betrayed about is the fact that Madame Marois stood with them against the Charest government and yet now, they have decided that tuition fee increases are non-negotiable…even though it’s at a much-reduced rate than what the Liberals had suggested,” Maioni told CTV’s Power Play. 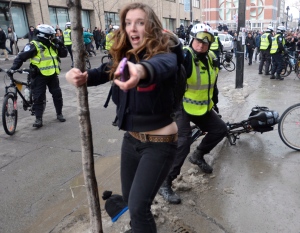