A student group protesting Ontario’s education cuts vows to fight a $1,444.51 bill from Queen’s Park to clean up sidewalk chalk messages left behind after a rally, while the NDP says it’s demanding the “callous” invoice be cancelled.

Vance was shocked when another student, a 15-year-old boy, got the invoice in the mail. The 15-year-old wasn’t even at the protest but had helped to secure the permit to be at Queen’s Park during a day of action on May 8, says Vance.

“They knew I was the organizer. I feel this is just about intimidating a younger student. They are trying to put us in our place,” said Vance, 18, who has just graduated from Western Technical-Commercial School in Toronto and is a leader with Students Say No.

“Queen’s Park is really trying to scare us. They don’t want us to come back,” she said.

The Ontario NDP is demanding the bill be cancelled.

“Spending $1,500 to do what rain or a hose could have taken care of in a few minutes is a waste. Sending that bill to students who were peacefully protesting is callous,” said NDP House Leader Gilles Bisson in a statement.

“It’s wrong to punish students who are speaking up for themselves and their future by speaking out against Doug Ford’s education cuts.”

In a statement to CTVNews.ca, Legislative Assembly of Ontario Sergeant-at-Arms Jackie Gordon says the application for a permit prohibits profanity in any protests, rallies, signs, speeches and activities and makes clear the applicant is responsible for clean up after the event.

“During this event, chalk was used by students who began writing on the roadway, walkways and statuary. Some of what was written was profane and inappropriate,” said Gordon. “At no time were the demonstrators told they had permission to use chalk or any other medium to write messages, as this type of activity is always strictly prohibited on the Legislative Grounds.”

Vance says about 200 elementary and high school students were at Queen’s Park that day, joining students from about 100 schools across the province holding local events.

She says protest slogans were written in chalk on the pavement and some monuments at the Ontario legislature building. She acknowledges that there was some profanity used but when legislature security officials asked for that to stop, the students complied. She says the students were never told to stop using the chalk.

Gordon says the “extent and nature of the writing” required a professional cleaning crew to erase it immediately. Weather records show Toronto received 15 millimetres of rain in the two days following the event.

“The Legislative Assembly regularly assists members of the public in hosting safe, peaceful demonstrations and often go above and beyond to provide support. However, the Legislative Assembly of Ontario is also fully prepared to hold those accountable who fail to respect laws and the rules governing the use of the building and the grounds,” Gordon wrote.

The student named on the invoice is “pretty scared,” said Vance. “It’s a lot of money. We are surprised and confused. We don’t have the money.”

The student group is getting messages of support from the public, with many offering to pitch in to help pay the bill. But Vance says her group is getting legal advice and intends to fight the charge.

The head of the Ontario Public Service Employees Union (OPSEU) said legislative staff were "bullying our youth" with the invoice.

“What knucklehead came up with a bill of $1,444.51 for a cleanup? Come on, a couple of buckets of water or a half decent rainfall would have taken care of it,” president Smokey Thomas wrote in a letter to Speaker Ted Arnott.

“Chalk one up to bullying our youth by a legislative kangaroo court.”

Thomas even offered to pay the “ridiculous” bill if Arnott wouldn’t rescind it.

“In a time when it is so difficult to get our young people engaged in the political process, we should be applauding them for getting involved. We shouldn't be trying to beat them out of their allowance.” 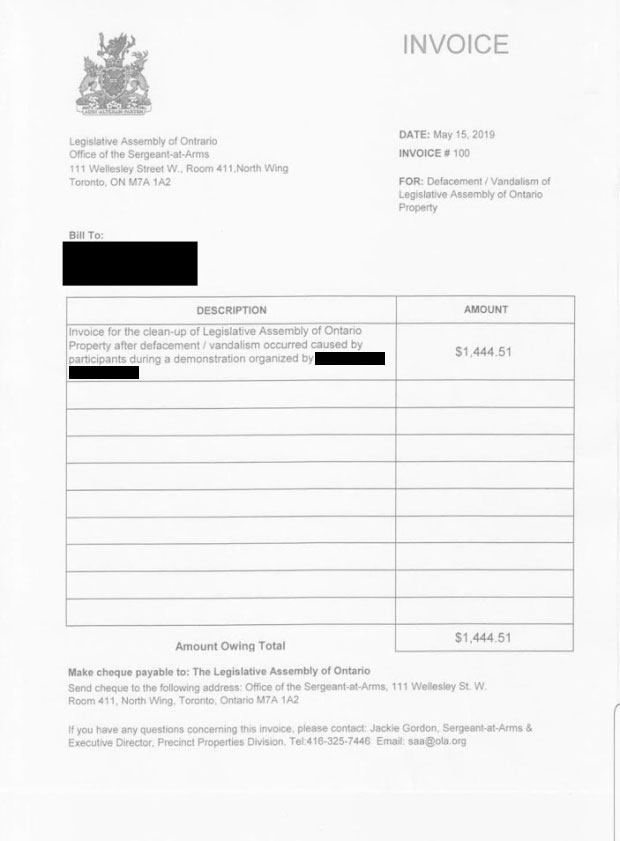