TORONTO -- Canadians with Asian backgrounds are far more likely than anyone else to report noticing increased racial or ethnic harassment or violence in their neighbourhood during the COVID-19 pandemic, according to new research from Statistics Canada.

Additionally, the data shows, white Canadians are the least likely to believe racist attacks or harassment regularly occur in their neighbourhood or are happening more often since the pandemic began.

The data was released Wednesday as part of StatCan's attempt to gather information about how Canadians are responding to the pandemic via crowdsourcing. Although this approach gives StatCan quick and easy access to a large pool of respondents – more than 43,000 for this particular research – that pool is not reflective of the overall population, meaning the results cannot be used to draw conclusions about Canadians as a whole.

At the bottom of the list were those who did not indicate any visible minority status and those who said they belong to population groups that are not considered visible minorities, both at approximately six per cent.

Respondents in visible minority groups were three times as likely to believe discriminatory attacks have increased since the pandemic began than those who did not report being visible minorities, StatCan said. 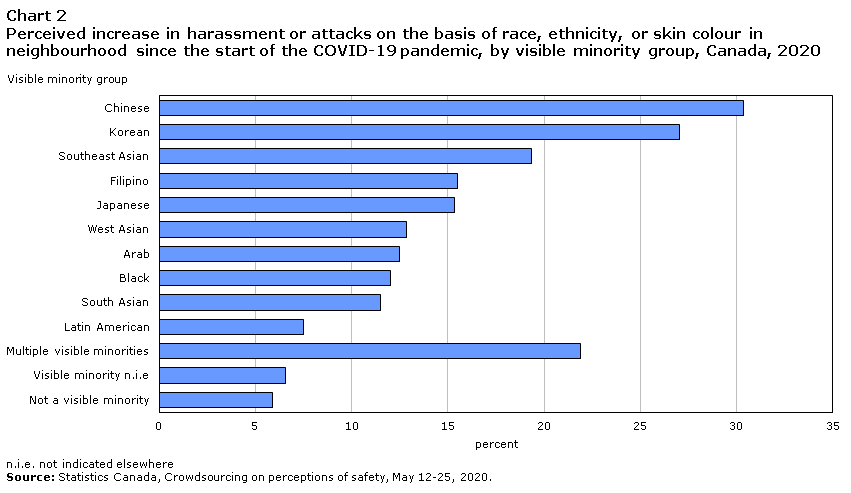 These findings are just the latest evidence that Asians in Canada have felt increasingly targeted by racist attacks and words during the pandemic.

In mid-March, just as the pandemic was taking hold, South Korea's consulate in Montreal warned those of Korean heritage in the city to be cautious about potential race-based attacks. Since then, several incidents targeting Asian Montrealers have come to light.

Police in Vancouver reported in May that they were investigating 29 possible anti-Asian hate crimes, up from four during the same time period. A poll taken around the same time found that 24 per cent of B.C. residents of East Asian or South Asian descent said they had received slurs or insults since the pandemic began.

There is no comprehensive data yet on the number of race-based attacks in Canada this year, but Project 1907, a community-led attempt to track anti-Asian harassment, had received reports of 120 such incidents as of mid-May.

Four-fifths of those reports were verbal, and the other 20 per cent involved physical actions including spitting, targeted coughing and outright violence. Almost all happened in public spaces, with more than half taking place on a street or sidewalk.

StatCan also asked those who took the survey about their perception of the frequency of racial and ethnic harassment and attacks in their neighbourhood in general.

Black and Korean respondents were the most likely to say they believed these discriminatory incidents happen often or sometimes in their neighbourhoods, at about 26.5 per cent each, followed by Chinese respondents at over 25 per cent and Filipino respondents at nearly 22 per cent.

Latin Americans and those who reported not being any visible minority were the least likely to report believing these incidents happen in their neighbourhoods, with 10.4 per cent of respondents in each group saying they think they happen sometimes or often. 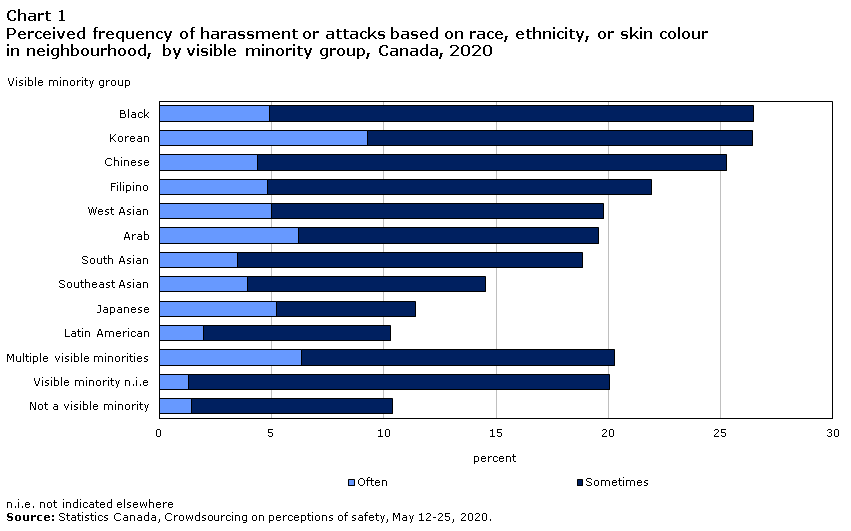 Overall, 21 per cent of respondents from visible minority groups reported that they believe discriminatory attacks or harassment occur sometimes or often in their neighbourhood – double the rate of those not considered visible minorities.

Those in visible minority groups were also slightly more likely than others to perceive that crime has increased in their neighbourhood during the pandemic, with Chinese and Japanese respondents most likely to do so.

"Although representing a notable proportion of the Canadian population, visible minorities generally report feeling less safe than the rest of the population," StatCan said in a commentary accompanying the data.

"Feeling unsafe can have negative impacts at both the social and the individual level, by reducing social cohesion or resulting in poorer physical or mental health and well-being."