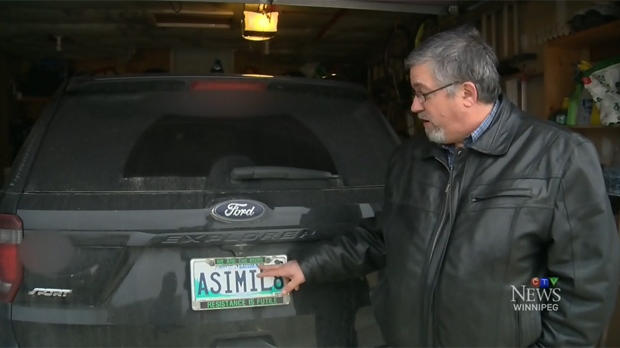 Nick Troller stands beside his licence plate in Winnipeg, Man.

Troller keeps it inside a licence plate holder that says: “WE ARE THE BORG. RESISTANCE IS FUTILE.” He says Trekkies will recognize that it’s a reference to the cyborg villains who bellowed “you will be assimilated” on various Star Trek series and movies.

He says strangers have complimented him on the plate and taken photos. “I thought it was funny,” he said.

But Troller got a phone call Wednesday from someone at Manitoba Public Insurance, who he says told him two people had complained that the word “assimilate” is offensive to indigenous people.

The dictionary definitions of assimilate include “to absorb into the cultural tradition of a population or group” and “to take into the mind and thoroughly understand.”

On Thursday, he was served with a letter that states: “…it has been brought to the attention of this office that the personalized plate ASIMIL8 is considered offensive.” The letter demanded that he “surrender” the plate immediately.

The letter says Troller can either get a new personalized plate or a refund on the $100 charge.

“But that’s not the point,” he says. “We’ve become way too sensitive. You can’t say anything anymore to anybody.” 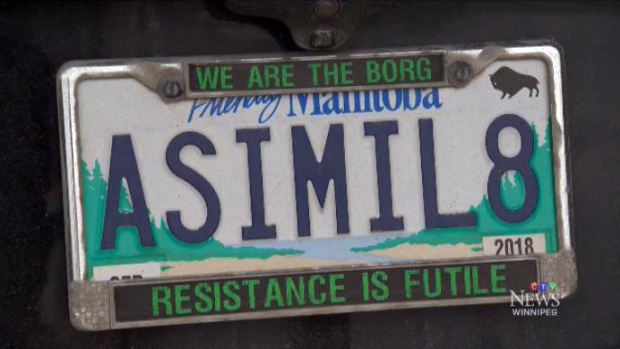 Ry Moran, from the National Centre for Truth and Reconciliation, is among those who agree with MPI that the word “assimilate” is too offensive to be on a licence plate.

“For basically the entirety of this country’s history, indigenous peoples have been forcibly assimilated through really extremely destructive means and ways,” he said.

Moran added that “words like that, meant or not, have an actual impact on many people.”

MPI’s policy states that “plates cannot contain a slogan that could be considered offensive.” MPI said in a statement that it takes such complaints “very seriously” and will investigate why the plate was approved in the first place.

Licence plates are property of the Crown and there is no appeal process.

Troller’s situation is reminiscent of a controversy in Nova Scotia, where a man named Lorne Grabher’s personalized GRABHER plate was revoked after a complaint that it was offensive to women.

The Justice Centre for Constitutional Freedoms said earlier this month that it plans to sue the Nova Scotia government over the revocation, which it sees as an infringement on freedom of expression.

The JCCF’s John Carpay said the GRABHER licence plate revocation is part of a wider trend in Canadian society.

"Canadians are becoming increasingly less tolerant of free expression," he said. "You have more and more people who believe that they have a legal right to go through life without seeing or without hearing things they find to be offensive."