A department from the University of Saskatchewan's college of education is calling for the retirement of school mascots and logos that depict First Nations people.

The resolution, which was unanimously passed on Friday, states that the Department of Educational Foundations "does not support the use of Indigenous people depicted as school mascots, in logos, slogans or team names" in primary, secondary and post-secondary schools.

In an email to CTV Saskatoon, department head Diane Miller said the idea that such logos and mascots are positive representations of Indigenous peoples is "false."

"These images spring from centuries-old racist discourses," she wrote. "The Department of Educational Foundations agrees that it is time to stop pretending that stereotyping is an honour. It is racism."

The resolution was posted to a Facebook page that's calling on a local high school team to stop using the "Redmen" name and mascot. Bedford Road Collegiate is the city's second oldest high school. Some faculty members from the Department of Educational Foundations say the school's mascot and team name are out of date.

"We won't stand for racism anymore. Especially in a community that has a very large aboriginal population," Alex Wilson, a faculty member from the department, said.

While some faculty members recognize that there is a tradition behind many of these team names, they say there is more is at stake than tradition.

"We listen to the aboriginal community and if many of them are saying this is wrong, then we have to respect that," faculty member Paul Orlowski said.

Activist Erica Lee created the Facebook page calling on Bedford Road Collegiate to drop the "Redmen" name. She said her cause is being helped by a similar debate that's taking place in the U.S.

The Washington Redskins football team is facing pressure to change its name. Even U.S. President Barack Obama has weighed in, stating that if he was the team's owner, he'd consider changing it.

"The fact that people are starting to get behind it with the whole Redskins controversy in Washington is really important," Lee said.

And while it is only one department from the university's college of education that voted for the resolution, the faculty members hope other departments will soon follow.

The Saskatoon Public School division was not able to provide a comment on the issue to CTV Saskatoon.

With a report from CTV Saskatoon's John Baglieri 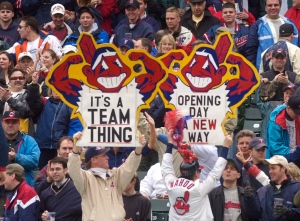 Native-themed logos and names in sports