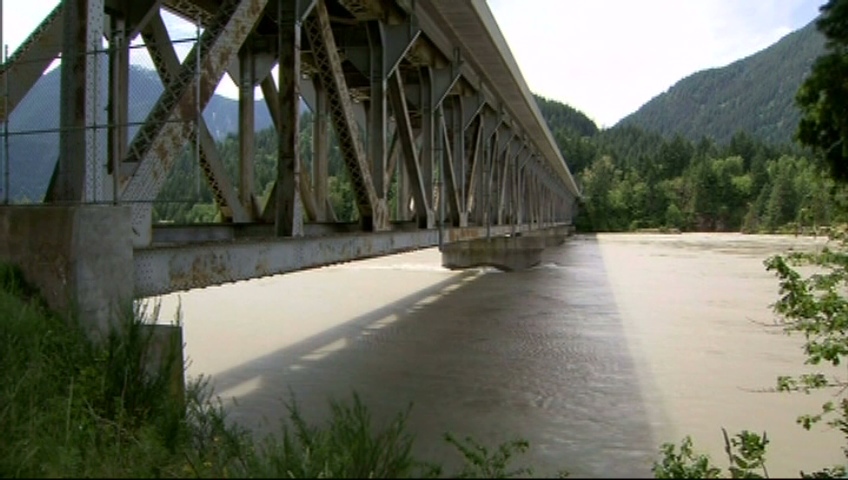 A bridge over the Fraser River in British Columbia is seen in this undated file photo.

VANCOUVER -- Two men are missing, homes have been damaged and more evacuation orders are in place as flooding and mudslides wreak havoc across southern British Columbia.

A 76-year-old man in a community north of Salmon Arm is unaccounted for after a mudslide enveloped his home Saturday, RCMP said.

Several other homes were damaged and a road leading to about 100 residences was cut off by the slide in the community of Tappen.

Meanwhile, the search continued for a missing fire chief in the village of Cache Creek who is believed to been swept away by swollen creek early Friday.

Warm temperatures speeding up the spring snowmelt and recent showers have resulted in rising water levels for many rivers and creeks.

Simon Fraser University earth sciences professor Brent Ward said it appears to be the worst flooding the province has seen since the late 1990s and if warm temperatures and rain stick around, it will delay relief for residents in flood zones.

"It depends on how rapidly the snowpack will melt which is a function of the temperature of the next little while as well as the rain," he said.

The City of West Kelowna declared a local state of emergency Saturday to address the flooding, and residents whose safety was at risk have been evacuated.

Ninety properties in the Fintry Delta area north of Kelowna also remain under an evacuation order due to flooding, while neighbouring residents are warned to be prepared to leave their homes on short notice if conditions worsen.

The River Forecast Centre has maintained a streamflow advisory for the south and central Interior, Boundary region and southeastern parts of the province as creek and river levels remain high.

The flooding and run-off has resulted in boil water advisories for the Westbank First Nation in Okanagan and the town of Kimberley in southeastern B.C.

DriveBC, which reports on provincial highway conditions, said sections of the Trans-Canada Highway near Salmon Arm and Glacier National Park were closed due to mudslides.

Highway 97A near Sicamous in the Interior is also closed following a mudslide while an avalanche closed Highway 99 at Duffey Lake east of Pemberton. Highway 8 west of Merritt was closed by a washout.

A statement from the provincial government on Friday warned people to stay away from river-banks and lake shorelines, not to drive through flood water and protect property in low-lying areas by clearing drains, sand bagging perimeters and removing valuables.

Ward says emergency officials have done a good job at addressing the crisis, but once the flooding clears, it may be time for communities to rethink their land use.

"The places that are flooding are on floodplains. I think people and municipalities have to start looking at how frequently do some of these areas flood and is it worth it for some of these people to be exposed to that kind of risk," he said.