A day after a spring storm battered parts of Atlantic Canada with hurricane-force wind gusts and heavy snowfall, blizzard-like conditions and low visibility continued to cause problems.

Across the East Coast, residents remained without power as wind-whipped snow caused zero-visibility on roads and slowed cleanup and power restoration efforts.

Prince Edward Island was blanketed with a record 53 centimetres of snow in some areas. Confederation Bridge was shut down for most of Thursday due to gale-force winds, but reopened to traffic in late afternoon.

A day after the worst of the storm, Nova Scotians also had to contend with power outages as high winds continued to blast parts of the province. Public schools remained closed, as residents and city cleanup crews tried to dig out of approximately 35 cms of snow.

In New Brunswick, high winds continued to cause whiteouts on highways. NB Power reported that more than 1,700 customers are affected by outages. Moncton saw a record-breaking 41 cms of snow.

Environment Canada is forecasting wind gusts of up to 120 km/h will continue into Thursday evening in Newfoundland and Labrador.

At the height of the storm, which descended on Atlantic Canada Wednesday afternoon, power outages left about 16,000 Nova Scotians in the dark, along with about 2,400 homes and businesses in southern New Brunswick and 900 in Prince Edward Island.

By Thursday evening, approximately 1,000 Nova Scotians were still in the dark.

Officials say the strong winds slowed efforts to restore power. Blowing snow and whiteout conditions are making it difficult for hydro crews to reach some areas affected by the storm.

The storm closed major highways in Nova Scotia, as well as in Newfoundland and Labrador; some of the roadways were re-opening to traffic Thursday morning.

Some flights were also cancelled today in Halifax and St. John's, N.L., and a number of ferry services were not operating.

Halifax's Manager of Public Affairs Breton Murphy said residents on the East Coast are used to dealing with stormy weather through the winter but "when it happens in the spring, it can have a little bit of an impact on the morale."

According to Environment Canada, Halifax received 21 centimetres of snow and Charlottetown received 49 centimetres.

New Glasgow Fire Chief Jason Peters said the home’s sole occupant was able to escape and seek shelter in her car after a blaze broke out. In normal weather conditions, the drive would take about 10 minutes, Peters said, but the snow slowed the emergency vehicles to a crawl. The two-storey house was destroyed.

"We were talking to the lady on her cellphone, telling her we were trying to get there," Peters said. "It was certainly frustrating when you can't get there and you know she's in her driveway, sitting in her car watching her house burn down." 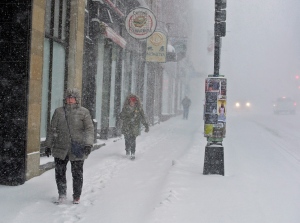 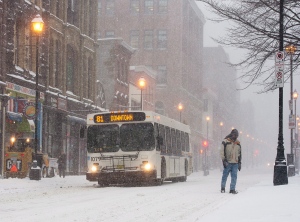 Submit your pics and videos of the spring blizzard!