'So much to learn': The untold stories of slavery in Canada 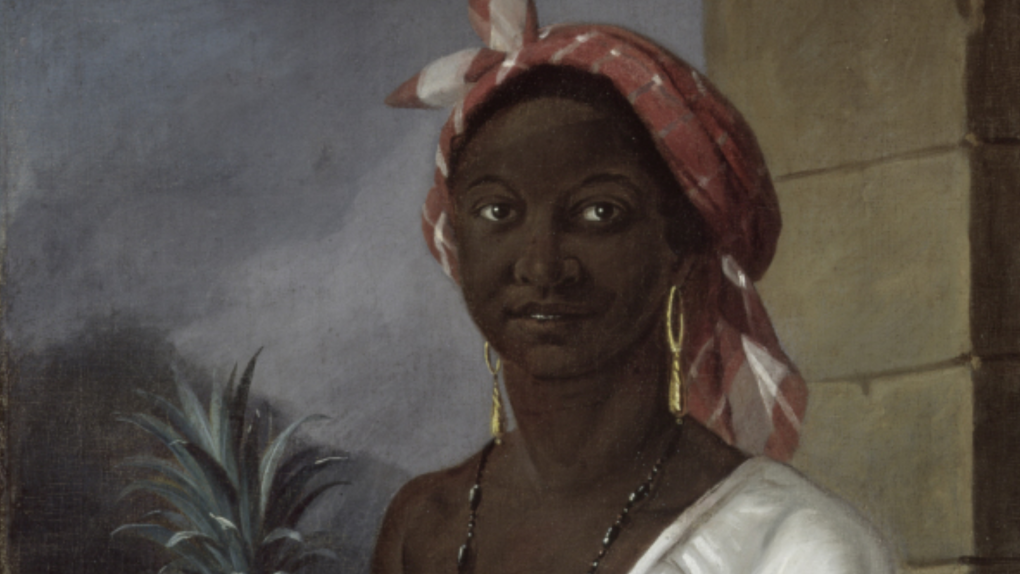 This 1786 painting, titled "Portrait of a Haitian woman," was done by François Malépart de Beaucourt and is believed to be an enslaved woman named Marie-Thérèse Zémire at age 15. (Wikimedia Commons/McCord Museum)

TORONTO -- A pregnant teen escaping captivity in a wintry Quebec. A young woman forced to pose nude for a painter in Montreal. The son of a free man tied up in a Toronto shed.

These are Canadian stories, just a few among hundreds of Black slave narratives from the colonies that became Canada. Stories of enslavement are not unique to the United States, though many Canadian history books would have readers believe that the Underground Railroad was the beginning and end of the country’s link to slavery. In fact, there were thousands of slaves, most of them of Indigenous decent, in the colonies that became Canada.

“If we are going to reckon with the realities and the legacies of racism and anti-Black racism we have to give attention to these experiences,” said Natasha Henry, the president of the Ontario Black History Society, whose doctoral research titled One Too Many: The Enslavement of Africans in Early Ontario, 1760 – 1834 aims to fill gaps in the history of Upper Canada and slavery. “It gets people to really see how connected Canada was to the enslavement of African people that ushered in capitalism and contributed to modernity. It’s a huge gap in our historical narrative.”

In 2020, more than 180 years after the abolition of slavery in the British Empire, there’s a push to right centuries of wrongdoing. A renewed racial reckoning in the U.S. and Canada began earlier this year with the death of George Floyd, a Black man arrested by police in Minneapolis. His death at the hands of a white police officer reignited the “Black Lives Matter” movement as it relates to police reform, but has stretched beyond law enforcement. Statues and names rooted in a history of slavery are being re-examined too. Even prominent American country music groups have rebranded themselves, shedding racial signifiers “Dixie” and “antebellum,” words with Confederate origins.

In Canada too, advocates have called for the renaming of streets and schools dedicated to historic slave owners like Henry Dundas, who tried to delay the end of slavery in the British Empire. Canadian activists have also renewed calls for Emancipation Day in Ontario, Aug. 1, which commemorates the abolition of slavery across the British Empire, to be declared a national holiday.

As monuments to white enslavers are reconsidered, a small group of Canadian scholars are researching the untold stories of Black and Indigenous people who were enslaved in Canada, in hopes that their stories may become more prominent.

Some of their stories have been commemorated in small ways. In Ontario, a plaque pays tribute to Chloe Cooley, a Black enslaved woman whose “violent resistance” as she was sold to a new owner in 1793 is considered to have paved the way for the gradual abolition of slavery in the British Empire. In Montreal, a public square is named for Marie-Joseph Angélique, a Black enslaved woman who was convicted of setting fire to her owner’s home in 1734, burning down much of present-day Old Montreal.

But many more remain untold. Here are just four more stories of many from Canadian archives.

“It’s going to be so arduous, so dangerous … if you try to escape in the winter and it goes wrong,” said McGill University art history professor Charmaine Nelson in an interview with CTVNews.ca.

But in a compilation of 51 “fugitive slave” ads between 1765-1833 in British Quebec, Canadian scholar Frank Mackey found about five enslaved people who attempted to run away in winter months. One was a Black woman named Bett, owned by Quebec business partners James Johnston and John Purss. 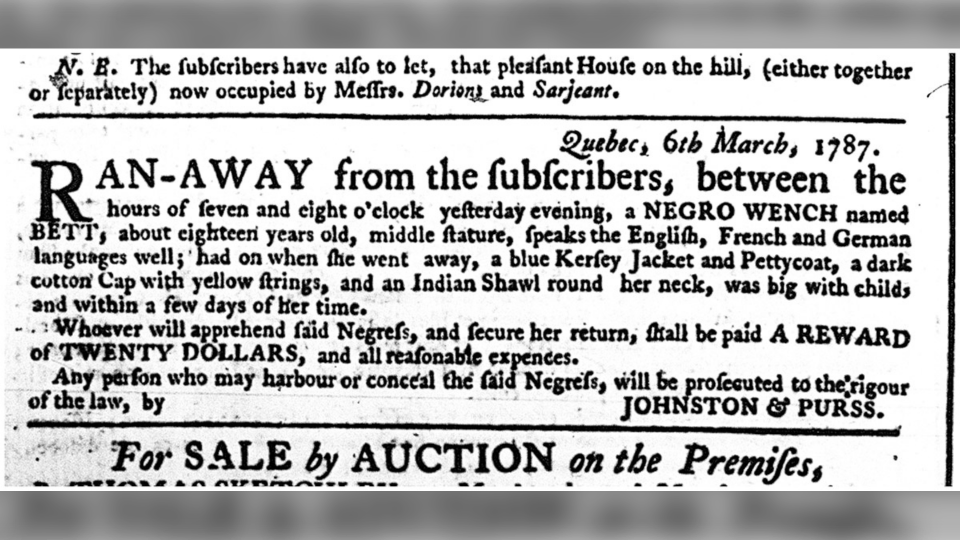 In the March 7, 1787, ad for her recapture, Johnston and Purss describe her as 18 years old, of middle stature, with the ability to speak English, French and German (skills that could aid in her escape). They also noted that she was pregnant and likely within a few days of her due date, said Nelson. “The compounding tragedies here are that Bett, at 18, is running away by herself in the winter in her third trimester,” she said. “Something really horrible is going on in this household for her to attempt this at this moment in this state.”

Nelson said it’s possible that the unborn child was either Johnston or Purss’s as there was a focus on so-called “breeding” since children took on the status of their enslaved mother and ensured more slave labour for the owners. “To lose Bett was also to lose the child in the womb,” she said. “Rape and sexual coercion were endemic in slavery.”

Bett is captured, but shows up later that year in the archives as being charged with the murder of her child. She is acquitted, though court transcripts don’t exist to explain what happened. The same year, Bett appears again, though is unnamed, in a for-sale ad in the Quebec Gazette. The men tout her specific language skills, which historians used to determine it was Bett, as well as her housework skills. And in what Nelson called a “very cruel” note, they add that she is “handy in the care of children.”

Toronto is not often connected to slavery in historical accounts, but its beginnings as the town of York, the centre of the political establishment, have links to the practice.

“The enslavement of Africans was part of that as an emerging urban centre,” said Henry, who was drawn to the archival evidence of an enslaved woman named Peggy and her three children, Amy, Jupiter and Milly, all owned by Upper Canada politician Peter Russell. Peggy’s husband, Pompadour, was a recently freed man after serving in the British Military during the American Revolution. He worked for wages on the Russell property, while the rest of the family were enslaved as "domestics," performing household tasks or working on the farm. 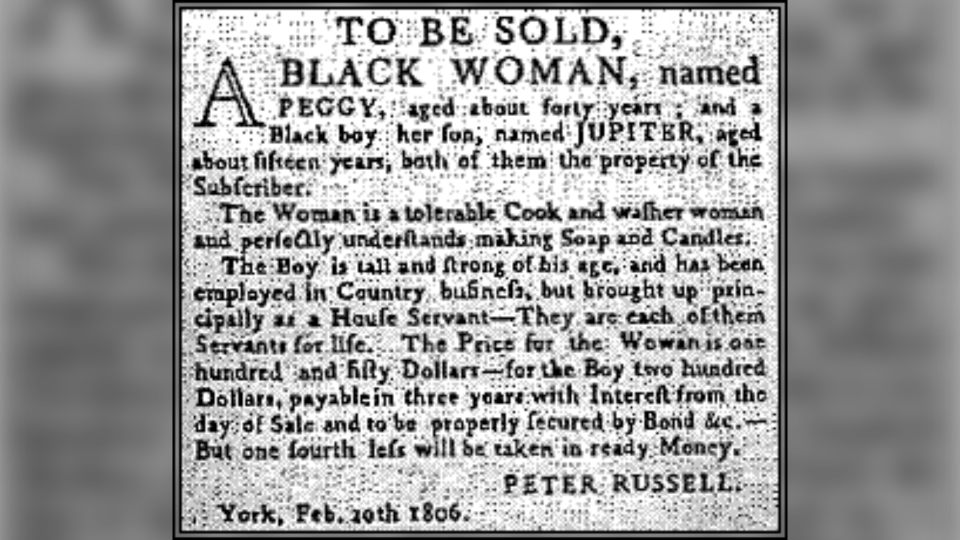 But historical records, such as Russell’s account books, court records and ads in the Upper Canada Gazette, show that the family may have resisted the system on numerous occasions. Employment records revealed that Pompadour was fired by Russell but later reinstated. Court records show that both Peggy and her son Jupiter were held in jail as a form of discipline that was common in urban centres, said Henry. At the age of 13, Jupiter was tied up in a storehouse as punishment. On more than one occasion, Russell attempted to sell Peggy in efforts to separate her from her children.

In Russell’s sister Elizabeth’s diary, Peggy and her family were described as “insolent,” “pilfering,” and “lying.” Some historians believe that the behaviour may have been deliberate acts of resistance.

Historians learned about enslaved woman Marie-Thérèse Zémire through a 1786 oil portrait by François Malépart de Beaucourt, which is believed to depict her in Saint-Domingue, or what became Haiti. Nelson said that it is likely that Zémire was purchased in the French colony before the slave revolt and was forcibly brought to Quebec, where she was owned by Malépart’s wife.

“If she had lived out the revolution, she would have been a free woman,” said Nelson. “She was taken away into the British Empire that was still enslaving and removed from a space where the Black people were able to secure their freedom. That’s an extreme tragedy.”

The painting is the only fully finished portrait of an enslaved person in Canada. Usually enslaved people were depicted alongside white aristocrats and were positioned as an “appendage,” said Nelson. Instead, Zémire, likely just 15 years old at the time, is painted alone but in a “disturbing” and “hyper sexualized” fashion, said Nelson. She may be smiling in the painting, but wouldn’t have had a choice to pose for the portrait. She smiles, with a breast exposed, holding a plate of tropical fruit, all of which delivers a message: “Take of my body as you take of this fruit.”

“The painting actually helps to do the work of the sexual stigmatization of Black women, which is essential to the so-called proper function of slavery through which then there was a maternal order to slavery,” said Nelson.

Like the story of Bett above, Zémire’s sexualization in the image emphasizes how enslaved women were valuable pieces of property for they could produce enslaved offspring.

“That incentivizes rape and sexual coercion, because to get her pregnant was to have more units of labour,” said Nelson. 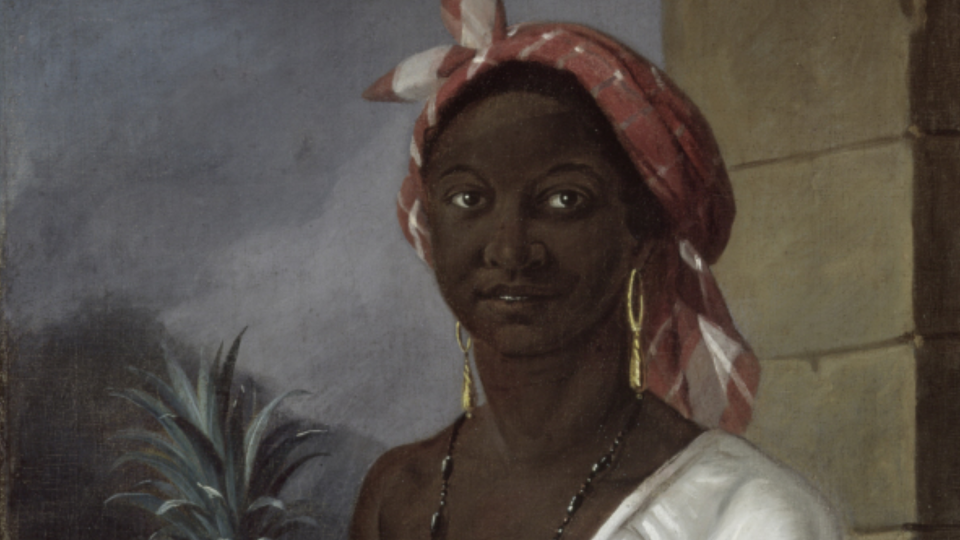 While the slavery is long gone from Canadian soil, remnants of the system were felt over the hundreds of years that followed abolition and still today, advocates and historians say.

“The remnants are the racial hierarchy that informs our society today," said Henry, who earlier this year wrote an online article about demands for an official government apology for slavery.

An apology is just a "first step," wrote Henry, as is learning about the untold lives of enslaved Black and Indigenous people in Canada.

"Look at these people as people, as human beings who had a particular life journey and have stories," she said. “There’s so much to learn."