Skyrocketing propane prices could mean trouble for some Canadians this winter 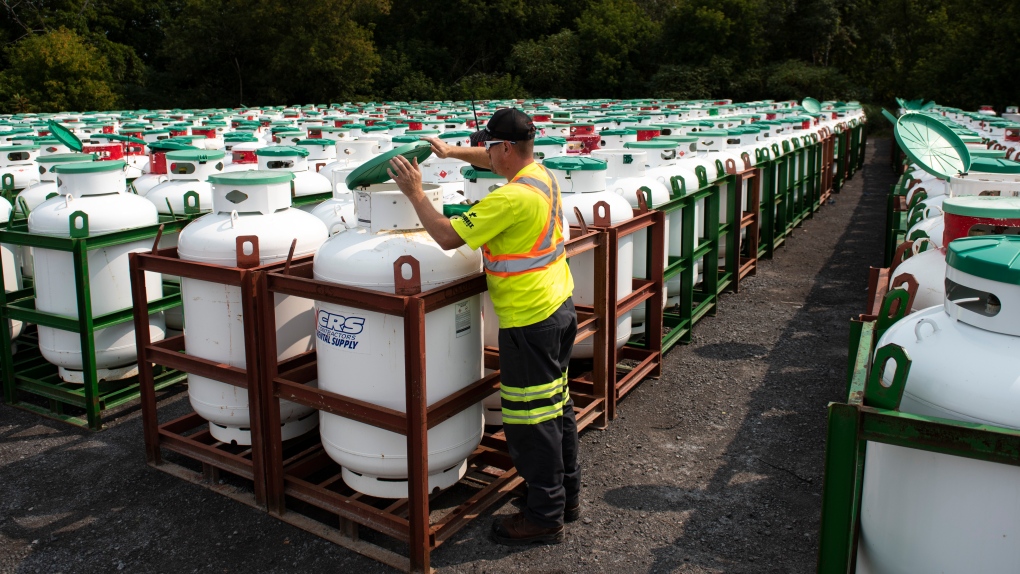 A technician prepares a propane tank at Sunbelt Rentals in Ottawa, on Tuesday, Sept. 15, 2020. THE CANADIAN PRESS/Justin Tang

CANMORE, ALTA. -- Although plenty of attention has been given to the rising price of gasoline and natural gas, Canadian propane prices are also skyrocketing – a surge analysts say will have a big impact on rural Canadians this winter.

Propane, produced as a by-product of natural gas, has seen a dramatic price increase over the last three months, with prices in Edmonton, for example, soaring to US$1.40 per gallon from roughly US$0.25 per gallon, according to ATB Capital Markets.

This seven-year high prompted a stark warning from research firm IHS Markit, who warned that U.S. propane prices are so high and supplies so scarce that the market appears headed for “armageddon” this winter, according to Bloomberg.

“Both because of the drop in oil and natural gas production because of COVID and also because of energy prices globally, we've been exporting a lot of this fuel, propane and natural gas. At the same time we’re not producing as much domestically in North America.”

Johnston says a large part of the increase is due to overseas demand, where prices are even higher than North America.

“Propane inventories even lower than they are for natural gas. And even lower still, because exports have grown even more dramatically in propane then they have in natural gas,” he explained.

“Propane exports are now something like 60 per cent of the overall U.S. market for propane, or it is still only 15 per cent for natural gas.”

Extreme weather has also played a role in the energy prices in North America. Gas prices were initially in late September driven up thanks to Hurricane Ida, which shut down a good portion of U.S. oil and natural gas production in late August.

And with frigid winters expected both here at home and overseas, it doesn’t look like prices will let up any time soon.

“Honestly, we will know when the weather forecast get better,” Johnston said. “It seems unlikely that the crisis or rolling crises that we're seeing in Europe and Asia are going to let up any time soon unless there's a very mild winter… because then those two stocks finally get a chance to catch up will get that much more time for production to grow again.”

With energy prices continuing to rise, consumers all over Canada will likely face higher heating costs this winter. While natural gas is the primary energy source for more than half of Canadian homes, nearly 1.4 million households rely on heating oil or other fuels, including propane, to heat their homes, especially those in rural areas.

“Propane is the main one for rural and off grid communities,” said Johnston. “It’s going to be much more expensive to fill those propane tanks this winter – and it’s not even cold yet.”