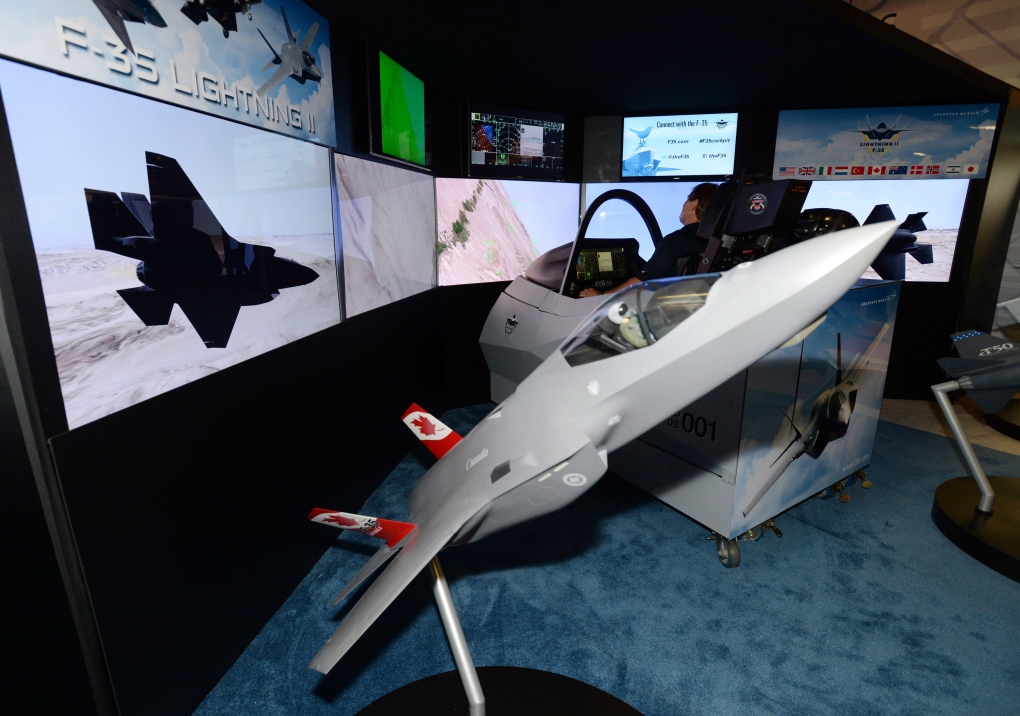 Lockheed Martin displays an F-35 simulator at the CANSEC trade show in Ottawa on Wednesday, May 28, 2014. (Sean Kilpatrick / THE CANADIAN PRESS)

The report, titled “One Dead Pilot,” was released on Monday. It suggests that the single-engine F-35 poses too many risks, and could fail over the ocean or the remote Arctic.

“With the exception of the F-35, all the aircraft currently under consideration have two engines,” the report says. “This difference has significant safety implications.”

Report author Michael Byers compares the F-35 to the CF-104 Starfighter, which also had a single engine. The jet was used by the Royal Canadian Air Force between 1961 and 1987, and was involved in 110 crashes during that time period.

Byers said the single engine made the jet vulnerable to crashes involving bird strikes, and without a second engine, the plane wasn’t able to keep flying. During its 26 years of operation, about a quarter of the jet’s crashes were attributed to bird strikes.

“Nearly half the fleet was also lost. But it was the significant number of casualties that earned the aircraft the nickname the ‘Widow Maker.’ ”

Byers concludes that “engine failures will still occur, and when they do so away from an airport, a second engine is the only thing that can prevent a crash.”

He adds that a two-engine plane would be better suited to Canada, which has the longest coastline in the world.

Byers holds the Canada Research Chair in global politics and international law at the University of British Columbia.

The government’s decision to purchase 65 F-35 jets to replace Canada’s aging fleet has been fraught with controversy since the government first announced its plans.

The federal government temporarily distanced itself from the decision to purchase the F-35s after a series of damning reports by Canada’s Parliamentary Budget Office and the auditor general.

The government then set up a group of bureaucrats and experts to conduct a review of fighter-jet options in order to determine a way forward with the decision.

The report was brought up during question period on Monday. Public Works Minister Diane Finley said no decision has yet been made on the replacement of the CF-18 fleet, adding that a panel of experts continue to review all reports.

Finley said the Conservatives are conducting an “impartial evaluation" of the reports to ensure the government's decision is "based on fact."

“Ministers are now reviewing those reports to make sure that all the analysis is indeed impartial and rigorous,” she said. “Once a decision is made, we will be announcing that and releasing the report.”

In a report released in April, the Rideau Institute and the Canadian Centre for Policy Alternatives said the cost of the jets could be anywhere between $12 billion and $81 billion over four decades.