Shoal Lake 40 First Nation to finally get its 'Freedom Road' 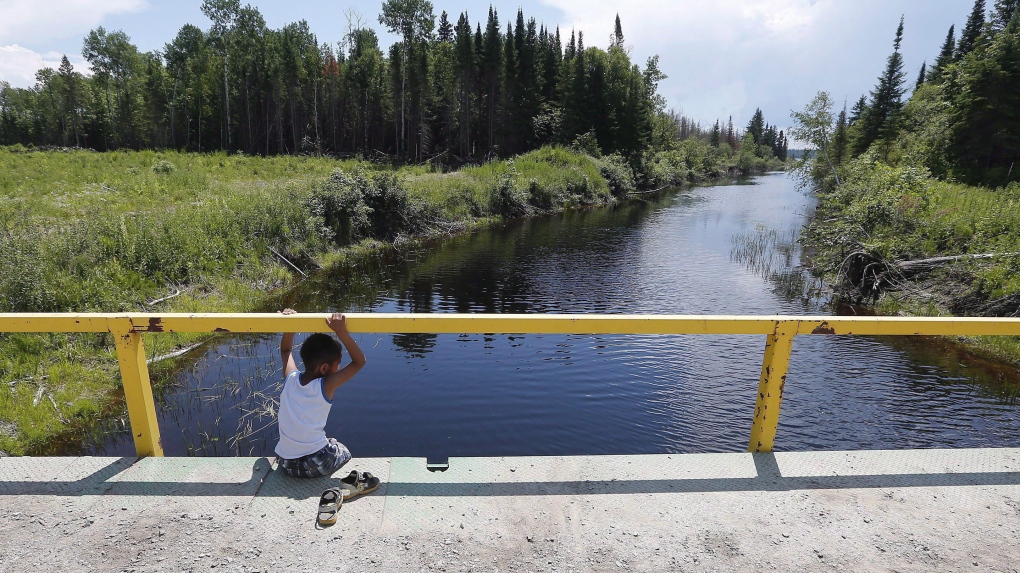 A boy from the Shoal Lake 40 First Nation sits on a bridge over a channel on on Thursday, June 25, 2015. (John Woods / THE CANADIAN PRESS)

WINNIPEG -- A reserve under one of the country's longest boil-water advisories is expected to get formal word Thursday that it will get a lifeline to the outside world after decades of living in virtual isolation.

All three levels of government are to officially announce their commitment to build an all-weather road to connect the Shoal Lake 40 First Nation to the mainland.

The reserve on the Manitoba-Ontario boundary was cut off a century ago during construction of an aqueduct which carries fresh water to Winnipeg. Surveyors said at the time that the land was largely uninhabited "with the exception of a few Indians."

While water continues to flow to the Manitoba capital, the reserve of several hundred people has been under a boil-water advisory for 18 years.

Chief Erwin Redsky said most residents are expected to gather at the Manitoba legislature -- along with Canada's new indigenous affairs minister, the Manitoba premier and a Winnipeg official -- to witness what he called a historic day.

"We're very excited," Redsky said. "It will be just an amazing feeling when that day comes, when we actually can drive 365 days a year right to our doorway.

"It's just the first step to the road of reconciliation."

Residents say the "Freedom Road" is both a symbolic and concrete beginning to right the wrong done a century ago.

Redsky said it will also save lives. People who live on the reserve use a treacherous ice road in the winter and people have died falling through the ice.

In the summer, the First Nation depends on an aging ferry to get to the mainland, but the vessel failed government inspection this year.

Health-care workers and ambulances won't risk going to the community and children have to leave the reserve to continue their education past Grade 8. A water treatment plant is prohibitively expensive, as are housing and sewer upgrades, without a road to transport the necessary equipment.

The former Conservative government refused to commit to help fund construction of a road, despite willingness by the province and the city to split the cost three ways.

Indigenous Affairs Minister Carolyn Bennett said the new federal Liberal government believes building the road is an example of "the kinds of steps you have to take to right the wrongs."

"This is a serious commitment and it will happen," she said in an interview with The Canadian Press.

"So many of these issues are no longer indigenous issues. These are Canadian issues about our values and principles and how we can go forward in a good way."

A design study -- paid for by the federal, provincial and municipal governments -- is expected to be completed in January. The reserve is hoping to begin construction shortly thereafter.

The road is expected to cost about $30 million, which is to be split three ways among the federal, provincial and municipal governments. The Manitoba government has already introduced a bill in the legislature that would give it legal authority to help fund construction of a permanent road.

"We've been talking about it for a long time," he told a luncheon this week at the Winnipeg Chamber of Commerce, which has been pushing for the road's construction.

"That will get built now."