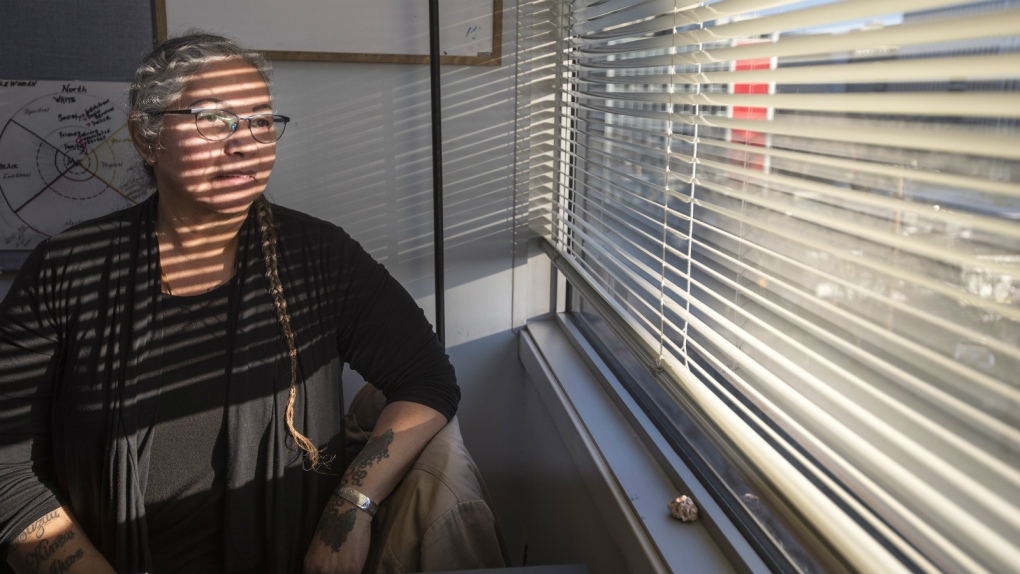 Sharon Acoose sits for a photograph at her office at the First Nations University of Canada in Saskatoon on Tuesday, Nov. 15, 2016. (Liam Richards / THE CANADIAN PRESS)

OTTAWA -- Sharon Acoose remembers being groped as a child by an uncle who paid her in pocket change for her trouble -- the earliest roots of a life scarred by sex work, drug use and jail time.

"He would give me a quarter ... or a nickel or a dime, whatever he had," Acoose, 63, recalled during an interview with The Canadian Press.

"You wouldn't believe all the candies that I bought."

Despite the longest of odds, she managed to turn her life around, eventually becoming a professor of social work. Countless others who followed a similar trajectory are no longer alive to tell the tale.

To this day, that same cycle is repeating itself with alarming frequency in indigenous communities across Canada, a CP investigation has found.

And with its insidious links to suicide, violence and mental health problems, the issue of child sexual abuse is poised to be a key theme in next year's long-anticipated national inquiry into the tragic phenomenon of murdered and missing indigenous women.

Acoose was just three years old and living in Regina when it started -- three separate uncles, all of them now dead. The memory later manifested as emotional, spiritual and physical self-punishment, fuelled by the cocktail of drugs and alcohol she used to numb her pain.

"That was just my destiny," she said. "That's exactly why I became what I became, because I grew up bitter, against men."

Indeed, experiences of sexual and physical abuse among indigenous women and girls are so pervasive they are expected to overwhelm next year's national inquiry, where commissioners will examine and report on the systemic causes of the violence.

Hearings are expected to begin in early 2017 and will undoubtedly draw attention from around the globe, said chief commissioner Marion Buller.

In May 2014, the RCMP documented 1,181 murdered and missing women between 1980 and 2012. A year later, it said 32 additional aboriginal women had been murdered and 11 more had disappeared since it first reported on the issue.

The force also cited an "unmistakable connection" between homicide and family violence.

Boyer co-authored a report on trafficking of aboriginal women for the Public Safety Department in May 2014 that noted many of its participants suffered sexual abuse as a child, contributing to a pattern of exploitation that carried on into their adult years.

"I see it as all being on a continuum," she said in an interview.

"You have children who are abused, you have young teenagers that are abused, they go through life, then it is just normalized behaviour ... some of them, we just don't hear their voices anymore because they're gone."

The links between missing and murdered women and childhood sexual abuse are undeniable, added Wally Oppal, who led B.C.'s hearings on how authorities handled cases in the wake of the Robert Pickton investigation.

Pickton -- one of Canada's most notorious serial killers -- was convicted in 2007 of the murders of six women and charged in the deaths of 20 others. A number of them were aboriginal.

Oppal's report found aboriginal women experience higher levels of violence in terms of both incidence and severity and are disproportionately represented among the missing and murdered.

"I still think of those women and what had happened to them ... the abuses that had taken place and why they had left home," he said.

Indigenous women who have been incarcerated like Acoose commonly suffer from abuse and share similar vulnerable backgrounds with those who go murdered and missing, said Kim Pate -- longtime head of the Canadian Association of Elizabeth Fry Societies and one of Canada's newest senators.

These women are at risk of being re-victimized. They find themselves over-policed yet underprotected from the violence and exploitation that enters all too often into their lives, she said.

"If they end up on the street or in communities where they are being victimized, they're often trying to figure out ways to survive that violence," Pate said. "They're trying to negotiate their lives."

Indigenous women are also more likely to be criminalized for fighting back, Pate added.

While The Canadian Press has a policy of not identifying the victims of sexual assault, Acoose agreed to be identified in this story as part of her ongoing efforts to raise awareness about the issue.

In her work at the First Nations University of Canada's Saskatoon campus, she finds herself pondering a lingering question: why wasn't there a national public inquiry 20 years ago?

"I am so fortunate to be able to talk to people and tell my story," Acoose said. "I should have been dead by the time I was 20."