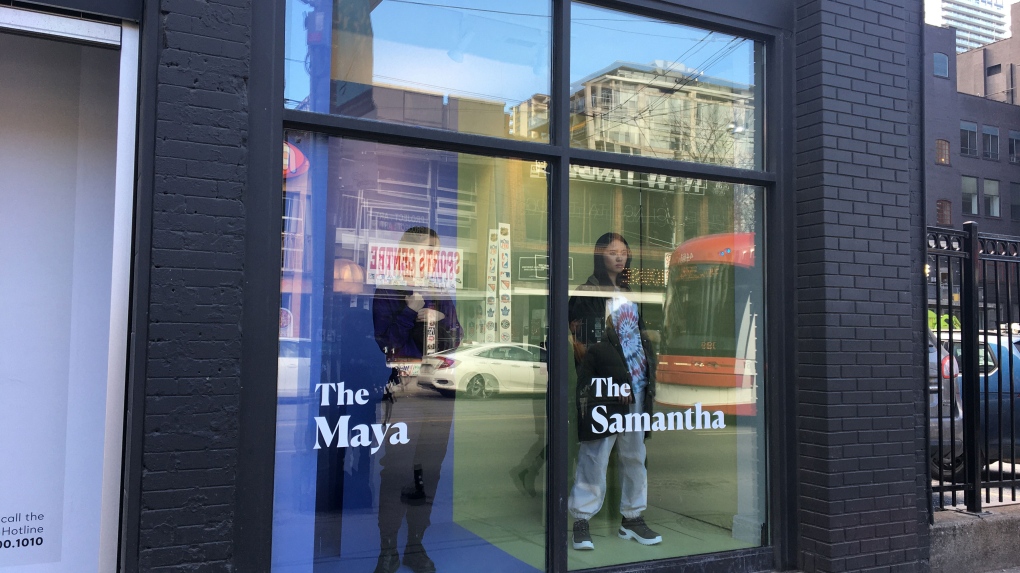 Models pose at a Toronto store front window to simulate how victims are seen as profitable items.

Most recent data from Statistics Canada show that 90 per cent of sex trafficking victims are females between the ages of 18 and 24 – and sometimes as young as 13.

Trafficking victims are often perceived as being physically detained and exploited through large human trafficking rings, according to Covenant House Toronto, the non-profit organization that aids in programs for at-risk youth.

“Sex trafficking is a Canadian issue. Ninety-three per cent of sex trafficking victims are Canadian citizens -- this is happening all around us,” Neubauer told CTVNews.ca on Thursday.

Many victims are exploited by trusted people such as boyfriends and they are often manipulated into thinking they are not being trafficked.

Covenant House Toronto is detailing the grim reality of sex trafficking with a new campaign ahead of Ontario Human Trafficking Awareness Day on Feb. 22. Their “Shoppable Girls” campaign was displayed Thursday in a Toronto storefront window, where young women posed as products to be sold to illustrate how traffickers view victims as profitable items.

The campaign included stories from survivors such as “Kaye,” who was convinced by her boyfriend to go into sex trafficking so they could purchase a house together. “Kaye” was trafficked for months and did not receive any money from her work.

“My road to recovery might have started sooner if I had known how supportive my family and friends would have been; If I truly understood the situation I was in -- if I’d only realized what was happening to me earlier,” her testimony read.

Nova Scotia has the highest rate of human trafficking incidents in Canada, with 2.1 victims for every 100,000 people, according to a statement from the provincial government.

The government announced Thursday that $1.4 million will be invested per year over the next five years for new anti-trafficking initiatives within the regions of Halifax, Cape Breton and South Shore.

In Ontario, Family Services of Peel Region says human trafficking is still a prevalent issue in cities such as Mississauga, Brampton and Caledon, at a rate of 1.14 per 100,000 people.

“Toronto is a hub for entertainment, so there might be an increase in demand for the sale of sex; this attracts consensual sex workers that are then being trafficked. I’m inclined to think because [Ontario’s Peel Region is] near the airport, there might be a lot of convention space out there, their population is ever growing, and they might have accessibility to major highways -- all of which play a role in a desirable location,” Correa told CTVNews.ca on Thursday.

The federal government announced a national strategy in 2018 to provide $75 million in funding initiatives across Canada to aid in victim support and resources. Correa said these initiatives have helped encourage people to come forward despite the consistent numbers in human trafficking.

“We are getting more referrals of people asking more questions about their situation of how it may or may not apply in the human trafficking realm, so the message is getting out there,” Correa said.

The “Shoppable Girls” campaign included interviews with 200 people across Canada who are involved in anti-human trafficking causes, including 50 survivors. Neubauer said Covenant House was not surprised by the results and found that many survivors are asking for better prevention and emotional support resources for victims

“They talked about the fear of the stigma and the shame they have when people don’t understand what happened to them. We need to encourage people to really understand what sex trafficking is and to have empathy and compassion for what these people have endured; most poignantly to recognized that no one chooses to be sex trafficked, it’s not about choice here.”

Neubauer said while Canada’s criminal code recognizes sex trafficking as a crime, there need to be stricter laws for convicting sex traffickers.

“Harsher penalties for people who are convicted would be one thing (to help) ...Also, a greater understanding and training for lawyers and judges to be able to understand what’s happening would be supremely helpful in securing convictions in the future,” Neubauer said.