Embattled Sen. Mike Duffy has left the Conservative caucus amid a growing scandal over his expense claims.

“It is clear the public controversy surrounding me and the repayment of my Senate expenses has become a significant distraction to my caucus colleagues, and to the government,” Duffy said in a statement Thursday evening.

“Given that my presence within the Conservative caucus only contributes to that distraction, I have decided to step outside of the caucus and sit as an independent Senator pending resolution of these questions.”

But a senior official told CTV’s Ottawa Bureau Chief Robert Fife that Duffy was pushed out of the caucus because of the growing questions surrounding his conduct.

The PMO then confirmed that Wright, a former Bay Street executive, wrote a personal cheque to Duffy. Still, Duffy claimed in an email to CTV News Tuesday night that Wright played no role and that he’d taken out a loan to repay the money.

A review of documents revealed Thursday that Duffy billed taxpayers for being on official Senate business while he was actually campaigning for the Conservatives ahead of the last federal election.

If it’s determined that Duffy attended eight campaign events and submitted Senate expenses, he could be in further trouble for double-billing.

The Conservative Party told CTV News that it paid for all of Duffy’s campaign event expenses.

But a check of social media and newspaper reports shows that Duffy’s reported Senate business overlapped with campaign events he attended in 2012. Among them:

The revelation that Wright personally bailed out Duffy prompted outrage and calls for an independent investigation.

“This is a scandal that’s undermining the credibility of the government and the prime minister, along with Mike himself,” Gregory Thomas of the Canadian Taxpayers Federation told CTV’s Power Play Thursday.

“This is different. This is a big scandal,” author and historian Michael Bliss said. “The $90,000 payment from the prime minister’s chief of staff to Senator Duffy is a smoking gun. It’s serious. I think it’s going to be a moment of truth for this government and this prime minister, and there’s no way it’s going to go away.”

"Apart from the troubling fact that someone else is paying for Mr. Duffy's mistakes, it appears that in receiving this so called 'gift' the senator may have breached several ethical rules of the Senate," NDP MP and ethics critic Charlie Angus wrote in a letter to Ricard.

Angus added that Senators are prohibited from receiving gifts other than those given as normal courtesy. Under the Senate Conflict of Interest Code, all gifts over $500 must be reported within 30 days.

"It goes without saying that a cheque for such a large amount is far from a customary standard of hospitality, nor a normal expression of courtesy," he wrote.

Duffy is one of three senators whose living expenses have come under fire over allegations they were claiming tens of thousands of dollars for accommodations in the Ottawa area under the Senate’s housing allowance rule – intended to compensate those whose primary residences are more than 100 kilometres from the capital.

However, an independent audit released last week showed that Duffy, along with Sen. Patrick Brazeau and Sen. Mac Harb, spent more time in Ottawa than at the homes declared to be their primary residences, rendering their claims ineligible.

Duffy, who repaid the expenses in March, was praised by the Conservatives for showing "leadership" in his decision to pay back the ineligible claims before the audits were released.

However, there was no indication at the time that the money used had been given to Duffy by Wright.

Brazeau and Harb were asked to repay about $48,000 and $51,000 respectively. Both senators have said they will fight the orders.

In an email Wednesday, the prime minister's director of communications Andrew MacDougall wrote: "Mr. Duffy agreed to repay the expenses because it was the right thing to do. However, Mr. Duffy was unable to make a timely repayment.

"Mr. Wright therefore wrote a cheque from his personal account for the full amount owing so that Mr. Duffy could repay the outstanding amount."

That confirmation from the PMO contradicts Duffy's earlier explanation to CTV News.

"The Royal Bank helped me…I dealt with my bank personally. Nigel played no role," Duffy wrote in an email to CTV News Tuesday, claiming he got a loan to repay the expense claims.

Wright has been the Prime Minister's chief of staff since 2011. The $90,000 cheque is a personal gift from Wright to Duffy, but insiders say the two men are not close friends and hardly know each other.

“It is clear the public controversy surrounding me and the repayment of my Senate expenses has become a significant distraction to my caucus colleagues, and to the government. Given that my presence within the Conservative caucus only contributes to that distraction, I have decided to step outside of the caucus and sit as an independent Senator pending resolution of these questions.

“Throughout this entire situation I have sought only to do the right thing. I look forward to all relevant facts being made clear in due course, at which point I am hopeful I will be able to rejoin the Conservative caucus.

“This has been a difficult time for me and my family, and we are going to take some time away from the public. I ask the media to respect our privacy while these questions are resolved through the appropriate processes. 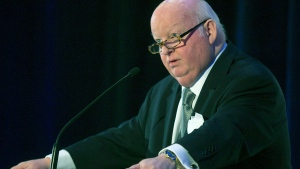