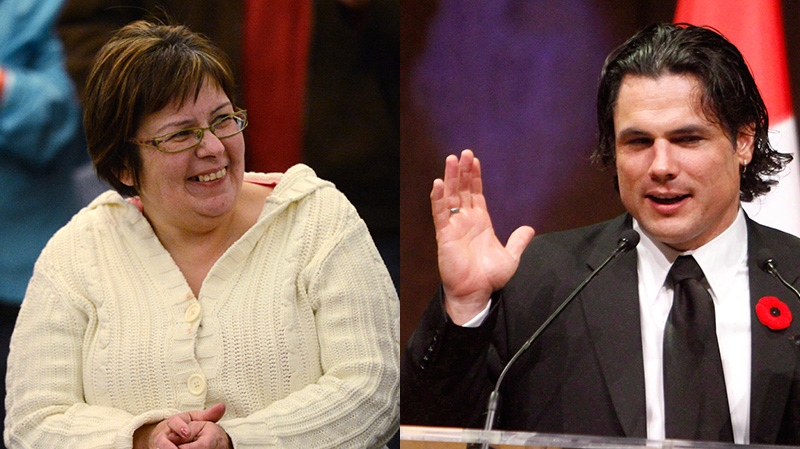 “Oh, poor Theresa Spence. Oh, poor her,” Brazeau is heard saying in an audio recording captured at a fundraising dinner for a provincial PC candidate in an Ottawa suburb, and provided to CTV News by Metroland Media.

The New Democrats attacked Brazeau Thursday, saying his comments were “disturbing” and misogynistic.

“I think the kind of misogyny, like what, making fat jokes is somehow something funny for the cracker base of the Conservatives?” NDP ethics critic Charlie Angus said.

“I don’t know what he was talking about, but it seems like an attempt again to ridicule, to attack her because she’s a woman, because she’s First Nations.”

Spence, whose northern Ontario community is plagued by poverty and substandard living conditions, recently ended a six-week liquids-only diet that briefly landed her in a hospital.

Brazeau has been critical of Spence and the Idle No More movement, saying some aboriginals simply expect to live on the taxpayers’ tab.

“To sit back, wait for the government to give me handouts,” he told Tuesday’s gathering. “Maybe be on welfare, maybe drink, maybe take up drugs.”

He later added: "The best way to get our land back, is to buy it back. Just like every other Canadian."

He told the crowd he entered the chief’s campsite during her hunger protest without identifying himself and noticed that her fingernails were manicured and that many of her supporters were white.

Angus said Brazeau and Galipeau should apologize, but both have told CTV News they have no plans to do so.

This is not the first time Spence and Brazeau have sparred publicly. Early in her hunger protest, Spence refused to meet with the senator who accused many First Nations leaders of “playing the victim” and refusing to take responsibility for the problems in their communities.

The tweet was quickly deleted and a member of Spence’s team denied that the chief typed the insult herself.

While Brazeau has called for greater financial accountability from First Nations, he himself landed in hot water when questions were raised about his housing allowance.

A senate committee is investigating whether Brazeau broke any rules by claiming that his primary residence is his father’s home in Maniwaki, Que., located 130 kilometres from Ottawa.

Senators are given a $20,000 housing allowance if their primary residence is at least 100 kilometres from the capital.

Brazeau told CTV News Thursday night that he has submitted all the relevant documentation to prove that his primary home is in Maniwaki.

With a report from CTV’s Ottawa Bureau Chief Robert Fife