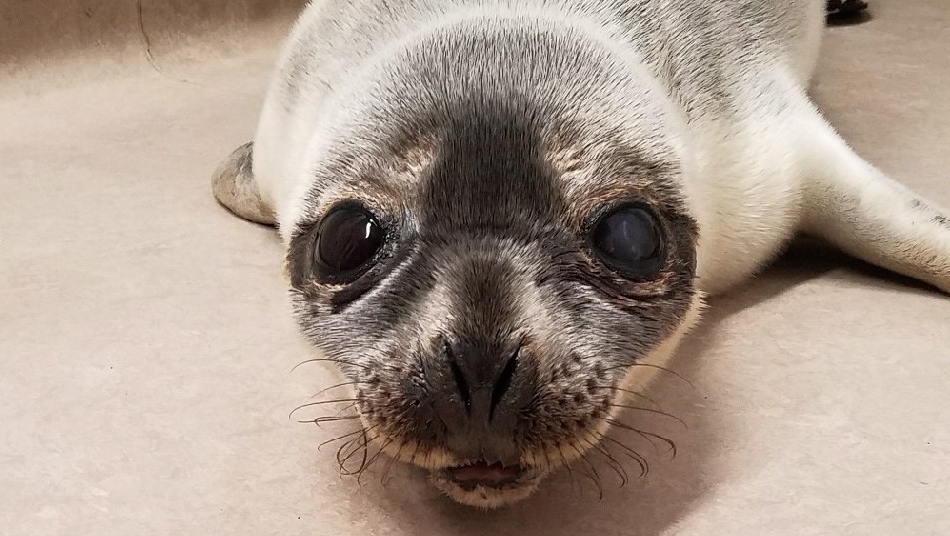 A seal that was hit by a car in Cape Breton and suffered an eye injury is shown in this handout image. The seal was brought to Hope for Wildlife Saturday night. ({THE CANADIAN PRESS/HO Hope for Wildlife- Hope Swinimer)

HALIFAX -- A wayward seal pup that was struck by a car after wandering onto a road two times in Cape Breton is munching on fish and recovering at a wildlife shelter outside Halifax.

Hope Swinimer of Hope for Wildlife said Monday that the young hooded seal arrived at her facility in Seaforth late Saturday after being spotted by a driver near Sydney and then loaded into a police car for a short drive to a wildlife volunteer, who delivered it to Swinimer's home.

"The good news is that we couldn't find anything broken," she said of the 23-kilogram animal. "But we're going to try to get about 10 kilograms on him because he is really thin."

Swinimer said the seal -- nicknamed 'ET' for its large, otherworldly eyes -- was bleeding from its left eye after being struck, but was eating on its own and didn't have any broken bones.

RCMP Cpl. Glynis Thomas responded to reports that a seal was on Highway 125 near Leitches Creek on Saturday afternoon. She said someone removed it from the road and put it back in the water, but that it returned to the same spot on the busy road where it was likely hit.

She said they had a crate brought in and corralled the small seal into it using a tarp, as they dodged attempted nips by the seal. A shelter volunteer who happened to be driving by helped get the animal into the cage.

"They have teeth and they're fairly good teeth!" she said. "He was definitely trying to grab onto us. It was a little scary, but he was just trying to protect himself."

She said the volunteer arranged to take the seal to the facility, but needed someone to deliver it to the causeway.

So, Thomas said police loaded the crated seal into one of their cruisers -- an unusual first for her.

"He was very well-mannered," she said with a laugh. "He was a very good traveller."

Swinimer said it's unusual for them to see this kind of seal and she's not sure if they will release it back into local waters or return it to Sydney when it is stronger in about two weeks.

She said the animal was likely born last year, but was quite thin.

Swinimer said it's not uncommon to see seals lying on the shoreline and trying to get some rest, particularly after high wind and waves. She said people should try not bother them, but should check for any sign of injury or sickness.

"They should look like a stuffed sausage," she said. "Now is the time of year that we get lots of calls about seals."