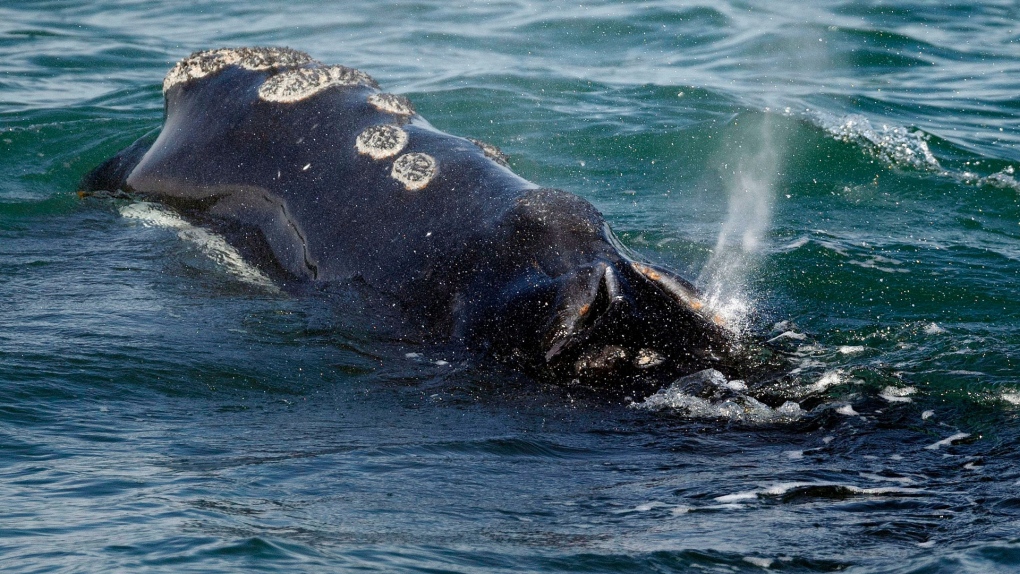 FILE - In this March 28, 2018 file photo, a North Atlantic right whale feeds on the surface of Cape Cod bay off the coast of Plymouth, Mass. (AP / Michael Dwyer, File)

HALIFAX -- Scientists continue to wait for necropsy results that could help determine what killed a North Atlantic right whale whose badly decomposed carcass was found this month off Long Island, N.Y.

"I personally would be expecting a month or two," Hamilton said Monday. "The carcass was fairly decomposed so that makes it more challenging."

Hamilton, who manages the catalogue of identified whales at the aquarium, has extensive knowledge of the animal nicknamed "Snake Eyes," which he had been watching for over 30 years.

He helped identify the 40-year-old male that was first observed by scientists in 1979.

Hamilton said the death is intriguing.

"It's last seen within a very severe entanglement and yet there was no line on it when the whale was found, so I am curious about what exactly happened. It may end up being a mystery," he said.

He added while it's safe to say entanglement didn't help in this case, he also wonders whether the whale was the victim of a ship strike.

"Those are the two leading causes ... and in some cases it may be a combination," Hamilton said.

So far this year, there have been eight right whale deaths confirmed in Canadian waters, out of an endangered population numbering only about 400 animals. Twenty-nine right whales have died in North American waters since 2017.

Hamilton said it's not totally unexpected that Snake Eyes would have been found where he was at this time of year, because right whales tend to range up and down the eastern seaboard of North America at various times of the year.

He said some 20 to 30 whales or more have congregated in a fairly small area of the Gulf mainly because of the food they find there.

Hamilton said climate change is disrupting the feeding areas for the whales, which partly explains why they are showing up in larger numbers in the Gulf.

It's also a partial explanation for the rare sighting last week off Newfoundland of an 11-year-old right whale named "Mogul."

Hamilton said Mogul was seen a year ago in July west of Iceland before returning in the winter as he normally does to waters off Cape Cod. In June he was seen off the coast of France.

"He's doing a lot of exploring," Hamilton said. "So a lot of what we are seeing, I think, are the impacts of climate change on the population -- the increased mortalities and entanglements, as well as potentially this whale doing more 'walkabouts,' as it were."

He said while measures are needed to protect the whales, it's becoming harder because they aren't consistent in where they feed anymore.

That's why he believes it's imperative initiatives such as ropeless fishing take hold in fisheries on both sides of the Canada-U.S. border.

"We need to start having blanket measures that will be consistent in both countries and won't be at the whim of having surveys that are able to locate whales," he said. "There are ways for industry and whales to coexist."

This report by The Canadian Press was first published on Sept. 30, 2019.