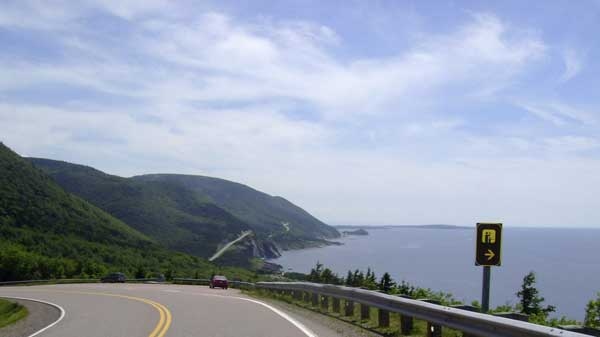 This July 13, 2010 photo shows the road along the eastern edge of Cape Breton Island in Nova Scotia.

SYDNEY, N.S. -- A 28-year-old Saudi man charged with sexually assaulting a Cape Breton woman has gone missing, with a leading immigration lawyer saying it may be a case of the Middle Eastern kingdom helping a citizen flee while awaiting trial.

Nova Scotia's prosecution service says Mohammed Zuraibi Alzoabi had $37,500 of his bail posted by the Saudi Arabian embassy last year in relation to the alleged sexual assault, assault and forcible confinement of the woman between Aug. 1, 2015 and March 26, 2017.

Alzoabi is also facing separate charges of dangerous driving and assault with a car in a December 2015 incident involving a Cape Breton man.

The money the kingdom provided for Alzoabi's bail last year was forfeited when he failed to appear in court last Monday.

A court document says the sheriff unsuccessfully tried to locate Alzoabi on Dec. 8, and quotes his lawyer at the time, David Iannetti, as saying Alzoabi "fled the country some time ago," even though police had seized his passport.

Veteran immigration lawyer Lee Cohen said in an interview that the likeliest way Alzoabi would have left the country without a passport is with embassy-issued travel documents, as airlines face heavy fines if they board passengers without the government-issued permission or a passport.

The Saudi Arabian embassy has not responded to emails or telephone calls requesting comment.

The incident comes amidst continuing tensions between Saudi Arabia and Canada.

On Friday, a Saudi teen was granted asylum in Canada after fleeing from her allegedly abusive family. Rahaf Mohammed Alqunun said the Saudi embassy in Thailand had tried to force her return to the kingdom.

In August, Saudi Crown Prince Mohammed bin Salman expelled Canada's ambassador and withdrew his own envoy after the Canadian foreign minister called for the release of women's rights activists who had been arrested in the country.

The Saudis also sold Canadian investments and recalled their students from universities in Canada.

In the United States, there have been a number of reports of Saudi students leaving the country mysteriously as they faced serious criminal charges.

The Oregonian newspaper has reported recently on the flight last year of Abdulrahman Sameer Noorah, a Portland, Oregon, community college student who jumped bail in the hit-and-run death of a 15-year-old Portland girl and apparently fled the United States.

The news site reported on Sunday it has found criminal cases involving at least five other Saudis who vanished before they faced trial or completed their jail sentence in the state.