Saskatchewan's Crown corporations hit by strike as 5,000 walk off the job 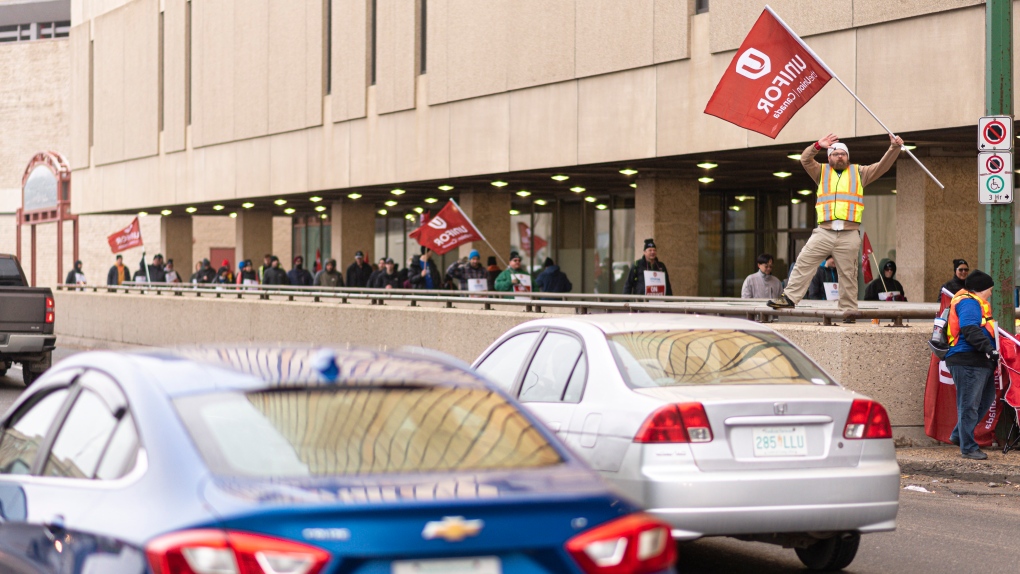 SaskTel employee Ryan Cleniuk, right, waves to drivers in the hope of a supportive "honk" near a SaskTel building on Saskatchewan Drive in downtown Regina on Friday, October 4, 2019. THE CANADIAN PRESS/Michael Bell

REGINA -- Upwards of 5,000 workers walked off their jobs Friday at six Crown corporations and one Crown agency in Saskatchewan over stalled contract talks a union leader said could be settled if it weren't for Premier Scott Moe.

Negotiators for the province and the workers represented by Unifor failed to reach a tentative deal by Thursday midnight. A work-to-rule campaign had already begun Monday.

Some unionized members remained available to respond to emergencies under essential service agreements with the Crowns covering such areas as SaskPower's outage centre and SaskTel's 911 service.

Unifor is seeking wage increases of two per cent in 2019, 2020 and 2021 and has said the key issue is the government's demand for wage freezes.

Jerry Dias, Unifor's national president, said the union is also asking for a lump-sum payment of four per cent over two years.

He couldn't say how long job action might last.

"We're dealing with Scott Moe, a premier who is not acting very rationally in the least," Dias said in an interview.

"The employers and us can clearly get a deal immediately, but it's being held up by the premier."

The union's last proposal was eight days ago, said Dias, who added that there had been no response.

"Everything we have asked for is tied into the rate of inflation and they're still saying no."

Unifor said on social media that hundreds of members would be gathering later Friday outside Evraz Place in Regina, where the Saskatchewan Party's convention was starting.

"In a time when this government has been drawing hundreds of millions of dollars out of the Crowns in recent years, using them as their personal piggy bank to plug the holes in their budgets, it's really embarrassing that they are offering zeros and unable to take care of the workers who do so much," Meili said.

The premier's office said Moe would not be commenting Friday on the strike.

But Finance Minister Donna Harpauer said in a statement that the government believes strike action is not in the best interests of Crown corporations, employees or the people of Saskatchewan.

"We believe that the employer offer of five per cent over five years respects the hard work of Crown employees while balancing the fiscal reality of our province, and we remain hopeful that an agreement can be reached at the bargaining table in good faith," Harpauer said.

Blair Swystun, president of Crown Investments Corp., said the companies would not be commenting on bargaining.

"That will not be done publicly, but rather at each bargaining table," Swystun said. "Each of the seven tables impacted by this strike have contingency plans ready and have put those plans into motion."

Mike Marsh, president and CEO of SaskPower, said its Unifor members had left their positions in its call centre.

"We have redeployed management staff to the call centre to handle calls," he said. "We do expect there will be some delays in perhaps getting response."

SaskTel said on its website that all stores would be closed during the labour disruption. Customers could get access to some services on the company's website, but it wasn't able to transfer services or activate new home accounts.

SaskTel said customers could still pay bills online, by mail or at a bank.

Federal NDP Leader Jagmeet Singh, who was making a campaign stop in Saskatchewan for the Oct. 21 election, also stopped to visit a picket line in Saskatoon.

This report by The Canadian Press was first published Oct. 4, 2019.

There’s about 100 picketers here in front of the SaskTel headquarters braving a chilly morning. pic.twitter.com/92KnMfgzXo

More and more crown employees joining the picket lines each passing minute. Lots of honking in support of the striking employees. pic.twitter.com/3B8mNMHS3j