Sandie Rinaldo looks back at 40 years with CTV News

At 23 years old, Sandie Rinaldo interviewed for a position with CTV News during a time when women were rarely considered to fill the anchor chair.

Four decades later, Rinaldo has earned distinction as the first woman in Canadian history to anchor a daily network newscast.

“When I was asked what I wanted to do in this business, with the brashness of youth I said, ‘One day I’m going to be hosting Canada AM,’” Rinaldo recalled.

Instead, she began her career with the CTV by answering phones.

“I worked my way up, slowly and gradually,” Rinaldo told  Canada AM on Monday, while celebrating her 40-year anniversary with CTV.

After accepting a position in 1973, to work as a junior secretary to Donald Cameron, who at the time was CTV’s director of news, Rinaldo quickly made the jump to W5 where she filled roles as a production secretary, production manager and later a researcher.

In 1977, during her initial audition for an on-air position with Canada AM, Rinaldo was told she had one chance to prove herself, and she’d either “sink or swim.”

“Women, I think, in those days had to work harder, prove ourselves, be better at the job than men were, simply to move ahead a step,” she said.

When she moved into an anchor position in 1980, Rinaldo recalled there was a “buzz” around the building.

“Look at us today,” she said. “Women are totally and unequivocally equal partners with men. There’s no such thing as the glass ceiling anymore.”

In 1985 Rinaldo became weekend anchor of CTV National News, a role she continues today. She is also an anchor for CTV New Channel and co-host and contributing reporter for W5.

“Sometimes I think about it, and I’m completely stunned by the passage of time,” she said.

Rinaldo, a mother of three and a grandmother, said the challenge of securing an interview that hasn’t been done before remains her favourite part of the job.

She lists interviews with John Candy, Gordon Lightfoot and Bob Marley as some of her favourites.

“I wish I could do it again, because there were a lot of questions I asked that I probably shouldn’t have at the time,” she said of the Marley interview.

“I was told by the news director at the time ‘be tough on him’ because he was advocating a certain type of lifestyle that people should be aware of,” Rinaldo recalled. “I think now, with the wisdom of age, I would have taken a whole different approach because he was an icon.

“These are lessons you learn as you do your job.” 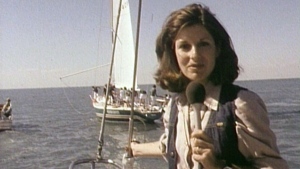 A look at Sandie Rinaldo's career