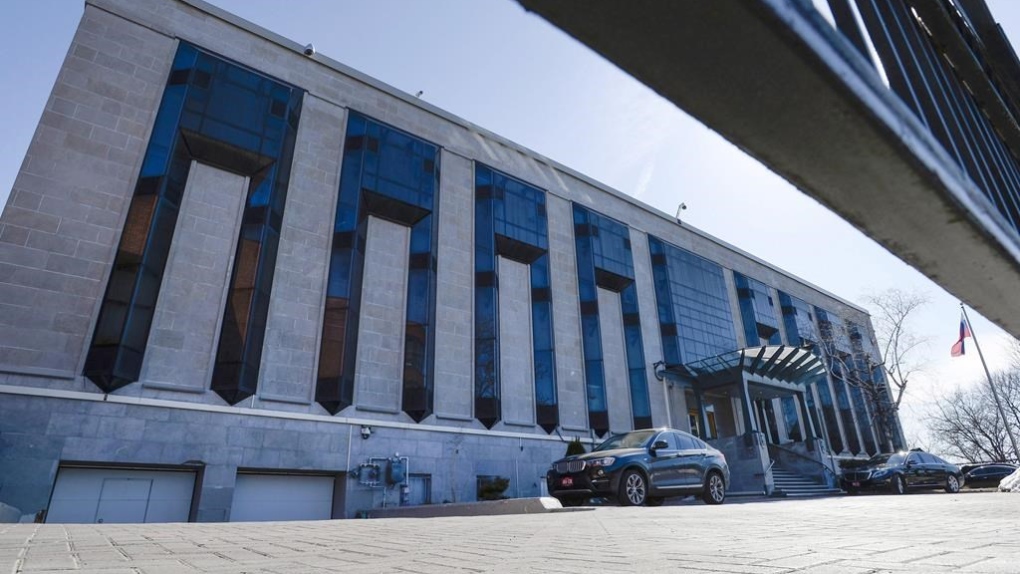 The Embassy of the Russian Federation to Canada in Ottawa is seen on Monday, March 26, 2018. THE CANADIAN PRESS/Justin Tang

OTTAWA -- A Russian student who was invited to present her research at an upcoming academic conference in Canada says she believes her visitor visa was unfairly rejected -- an issue scholars say is a growing problem for academics from certain areas of the world trying attend conferences in Canada.

Marina Dubova was all set for a conference on cognitive science and artificial intelligence in Montreal next month, but was recently informed her application for a visa was rejected.

She said friends and colleagues warned her not to bother applying at all, as she was told single women without children are often rejected for these reasons. But as a student of cognitive science, this conference is the biggest in her field and important for networking and seeing the latest research being explored by her international colleagues.

Dubova believes the fact she's coming from Russia -- a country with a number of diplomatic tensions with Western nations -- is a major reason why her application was rejected.

"I think it's just lottery of birth and some additional conditions -- that I'm not married and I don't have kids and I'm young. But it is a stereotype that people from less-developed countries want to stay illegally," Dubova said in a telephone interview from Russia.

"People with high education, with career goals, are not going to stay somewhere illegally. It's really frustrating to have to prove this every single time."

Her experience is not isolated.

After expressing frustration about her situation on social media, Dubova received a long list of responses from other academics and students from around the world who've also encountered visa problems when trying to attend conferences in the U.S. and Canada. Some were outright refused while others complained of delays so long that they didn't receive approval in time to attend their events.

Many echoed her concern that people from certain countries face greater scrutiny by Canadian visa officials.

"I was very surprised," Dubova said of the responses she received.

"I found it very, very unfair that many people have to struggle with limited opportunities just because they were born in the wrong country."

The Immigration Department said decisions about visas are made on a case-by-case basis and if an applicant is refused, it is because he or she does not meet requirements -- not merely because of his or her country of origin.

Political instability in a country can be a factor in determining visa eligibility, but overall, all applications are measured against the same standard, a department official said.

But concerns about visa rejections for academic conferences continue to arise.

In March, a number of delegates planning to attend an International Studies Association conference in Toronto encountered so many visa denials and processing delays, it prompted outcry from participants. The association to set aside $15,000 for partial reimbursements to conference participants who lost money as a result of visa concerns.

Ed Schatz, a professor of political science at the University of Toronto, attended that conference and said the number of no-shows due to visa issues "materially affected the discussions."

He has encountered similar instances of visiting academics refused entry to Canada for conferences over the years, particularly from developing nations and countries without robust consular services.

It's a major deterrent for those trying to organize and ensure a diversity of voices and experiences at academic conferences in Canada, Schatz said.

"If Canada is going to be in the business of hosting these conferences -- and I very much think that we need to because we need to be at the forefront of scholarship and research -- we need to figure out a way to solve this problem because it's a serious deterrent on the front-end and it's a real frustration for organizers and participants."

Mathieu Genest, a spokesperson for Immigration Minister Ahmed Hussen, said his department understands that conferences and other academic events must be able to attract leaders in their fields. The department is committed to working with organizers to help facilitate processing travel documents, he said.

But he also noted that visa decisions are based on the specific facts presented by applicants in each individual case and that these decisions are made independently of political or ministerial involvement, in accordance with Canadian immigration law.

"Our government believes in the power of science to address global challenges. Increased international collaboration will help foster new breakthroughs and ensure Canadians and people all around the world benefit from science," Genest said in a statement.

"We are committed to an efficient and non-discriminatory immigration system that treats everyone with respect and fairness."

In the United Kingdom, concerns about visa refusals for visiting academics led to accusations in that country of institutional racism and discrimination.

Those concerns have led to a parliamentary inquiry on visa refusals by British MPs.