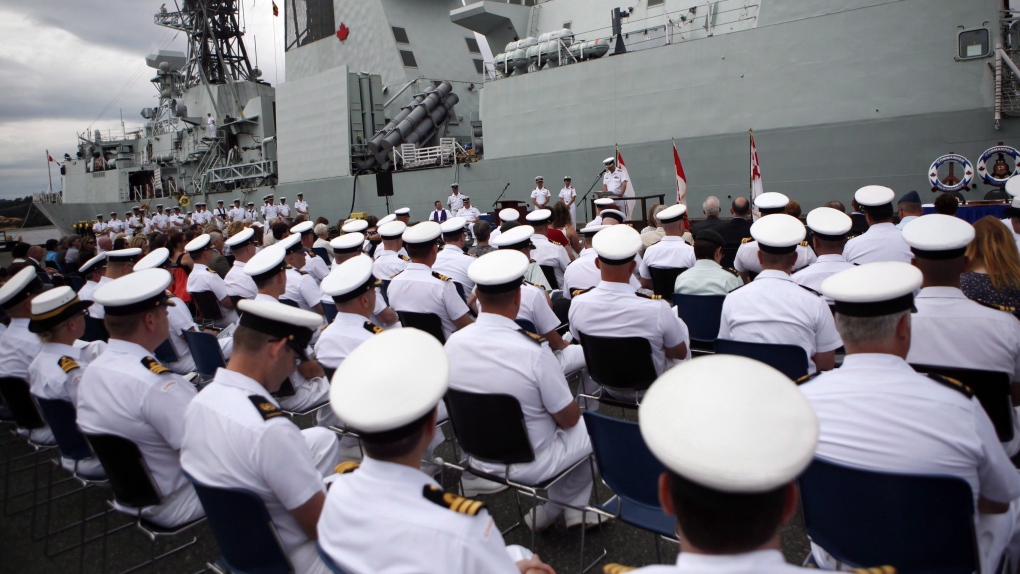 The HMCS Calgary is seen behind sailors during a change of command ceremony at CFB Esquimalt, in Esquimalt, B.C., Wednesday, June 24, 2015. THE CANADIAN PRESS/Chad Hipolito

OTTAWA -- It's been billed as the largest-ever investment in the Royal Canadian Navy and Canadian Coast Guard during a time of peace.

Over the next decade, the federal government will invest tens of billions of dollars into new science ships, icebreakers, supply vessels and warships.

Yet as they prepare to welcome those new ships with open arms, given the age of their current fleets, top officials at both the navy and coast guard are wrestling with a difficult but critical question: Who will sail the vessels?

That is because the Royal Canadian Navy and Canadian Coast Guard need hundreds more sailors between them. And while the situation isn't critical yet, it has become one of the top priorities for both services.

"It's good to get all those resources, all this new technology and new ships," Canadian Coast Guard Commissioner Mario Pelletier said in a recent interview. "But without people, I'm not going to be able to operate or to support or to manage the operations. So I need people."

The coast guard says up to 15 per cent of its positions are currently vacant, representing a shortfall of roughly 1,000 people. While that alone is cause for concern, the organization released a business plan last year that noted the workforce is also getting older.

Vice-Admiral Art McDonald, who took over as commander of the Royal Canadian Navy last June, has the same priority: getting more young men and women to sign up to sail with the navy, which is short roughly 850 members.

The shortfall is manageable now, but McDonald said the concern is what would happen should the navy find itself needing to dramatically ramp up its operations -- something that can't be ruled out given the current state of the world.

"So on one hand, my broad message to you is it's very manageable, the shortfalls we're currently experiencing," he said. "But in a volatile world where we may be required to do more, we need to be able to push to fill those numbers in -- and we are."

The navy and coast guard are not alone when it comes to having trouble recruiting new sailors. Canada's entire marine industry is facing a similar shortage of bodies, as older sailors leave faster than they can be replaced and new technology sparks shortages of certain skills.

"We've identified a shortage over the next five to 10 years of about 5,000 people," said Bruce Burrows, president of the Chamber of Marine Commerce. "And we are having to temporarily bring, for example, foreign captains."

Why aren't people considering a career in the navy, coast guard or marine industry? Officials have previously cited the fight for employees at a time when unemployment is low and many people don't want to be away from home for long periods of time.

Yet McDonald, Pelletier and Burrows all cite a lack of awareness. McDonald calls it "maritime blindness." Not only have most Canadians never been on -- or perhaps even close to -- a large vessel, but those interviewed believe there is a misconception about the job.

Burrows is quick to list the many ways in which the industry has tried to become more appealing, including shorter stints at sea, more emphasis on high-tech skills as vessels have become more modern, and better food and connectivity to home.

The navy, meanwhile, has been implementing wireless networks onto its ships so sailors can stay connected to home while highlighting the ability to learn new skills in a fast-paced environment.

"We just have to get our story out," McDonald said. "And what millennials and others are looking for is a chance to do a relevant job where they get to shape what the output is and have a voice to be heard and to contribute."

The federal government and industry teamed up in January to create the Canadian Marine Industry Foundation, whose purpose will be to promote careers in the marine sector and bring in much-needed new blood.

For McDonald, the stakes are high over the next few years.

"My concern is being 850 down this year, we need to get those people in. We have a message that we're hiring because robustness, resilience and our ability to fully meet the surge if we get asked to do more than we're doing now means that I need those extra people to come in."

This report by The Canadian Press was first published Feb. 29, 2020.