'Rolling Thunder': What to know about the Ottawa motorcycle convoy

'Rolling Thunder': What to know about the Ottawa motorcycle convoy

Motorcycle riders are set to arrive in Ottawa this weekend for what organizers call a ‘Rolling Thunder’ rally on Parliament Hill.

Dubbed "Rolling Thunder Ottawa," the convoy plans to loop through downtown Friday and Saturday, though their reasons for the rally are unclear.

The event is bound to be a reminder of the downtown protests over COVID-19 mandates that paralyzed Ottawa for weeks and inspired similar demonstrations across Canada and around the world earlier this year.

Police plan to deploy officers for the weekend’s events, including pre-emptively preventing vehicles from entering the area surrounding Parliament Hill.

CTVNews.ca has rounded up what you need to know about the planned protest.

WHAT IS 'ROLLING THUNDER OTTAWA'?

Between 500 and 1,000 motorcycles and other vehicles are expected to take part in the event, although it's unclear exactly what their principle motivations are.

The "Rolling Thunder Ottawa" website offers limited information on the group itself, although its main Facebook page, which is a closed group, says the convoy is a biker rally to peacefully celebrate freedom.

Despite similar names, The Rolling Barrage, which is a yearly coast-to-coast motorcycle ride across Canada to raise awareness for PTSD in military veterans and first responders, is not affiliated with "Rolling Thunder Ottawa."

"Rolling Thunder" lists Veterans for Freedom and Freedom Fighters Canada as its partners, both of which appear to have links to the trucker convoy protests seen earlier this year.

On its website, Veterans for Freedom describes itself as a group of Canadian veterans working to "restore fundamental freedoms for all Canadians" and "uphold Canadian laws."

Freedom Fighters Canada's website, meanwhile, says it is an organization "demanding the end of all government mandates" and the end of "tyrannical legislation."

WHAT IS THE SCHEDULE FOR THE RALLY?

The schedule for the "Rolling Thunder" convoy includes a rally and march on Parliament Hill on Friday, followed by an after party. On Saturday, Veterans for Freedom will hold a service at the National War Memorial.

Appearing on The Evan Solomon Show on Tuesday, "Rolling Thunder Ottawa" organizer and veteran Neil Sheard said, despite the event being characterized as a demonstration, protest and convoy, it is actually a rally meant to give back "dignity" to the National War Memorial that was "desecrated by the powers that be."

This is in reference to the placing, and later the removal, of fencing around the memorial during the "Freedom Convoy" protests earlier this year.

A spokesperson for The Royal Canadian Legion told CTV News Ottawa that war memorials and cenotaphs are important symbols of the service and sacrifice of Canada's veterans and should "never be used as a backdrop to any other agenda beyond the act of remembrance."

The Legion is appealing to all who gather before the National War Memorial this weekend do so only with the act of remembrance in mind.

The service at the National War Memorial will be followed by a rally and march by Freedom Fighters Canada on Parliament Hill in the afternoon, featuring Chris Sky as a "special guest."

Sky, also known as Chris Saccoccia, has been involved in several protests against COVID-19 mandates across Canada and was previously arrested in Ontario and Manitoba for violating public health orders.

The weekend’s activities are expected tol wrap with a church service in Vanier on Sunday, after which the plan is to leave the city.

A statement attributed to Sheard on the group's website says they do not support "blockades, obstruction of police performing their duties, damage to property, or hate and vitriol directed to the residents of Ottawa."

The statement also encourages supporters to follow the law, and says police will be held accountable in court for their actions during the event.

"Lastly, as seen during the lawful protest in Ottawa, spread as much peace, love and patriotism to your fellow Canadians as possible," the statement says.

WHAT WILL THE POLICE RESPONSE BE?

Police are warning the public to prepare for possible traffic disruptions in Ottawa during the weekend rally.

Along with restricting access to vehicles around Parliament Hill, interim Ottawa police chief Steve Bell issued a warning to organizers and participants, telling them: "You will be held accountable for your actions before, during, and after the events."

Police have set up an exclusion zone for vehicles around Ottawa's downtown core and Byward Market, with Parliament Hill off-limits for vehicle traffic. Police warn that motorcyclists will be ticketed and their vehicles will be towed if they park in no-stopping zones. Roads will only be open for residential and business traffic, pedestrians, cyclists and public transit.

Ottawa police, OPP and RCMP cruisers have also been deployed at intersections through the downtown area, while city barricades have closed various intersections across the city.

Ottawa residents are pre-emptively parking their own cars on the street before the protesters arrive. Some have also planned an "Unwelcoming Party" on Friday, in a counter-protest to the rally.

Bylaw officers also plan on stepping up enforcement on any violations regarding noise, litter and fireworks. Police have said there will be no tolerance for a long-term protest like the one that occupied the downtown for weeks in February, and any encampments will be dismantled. 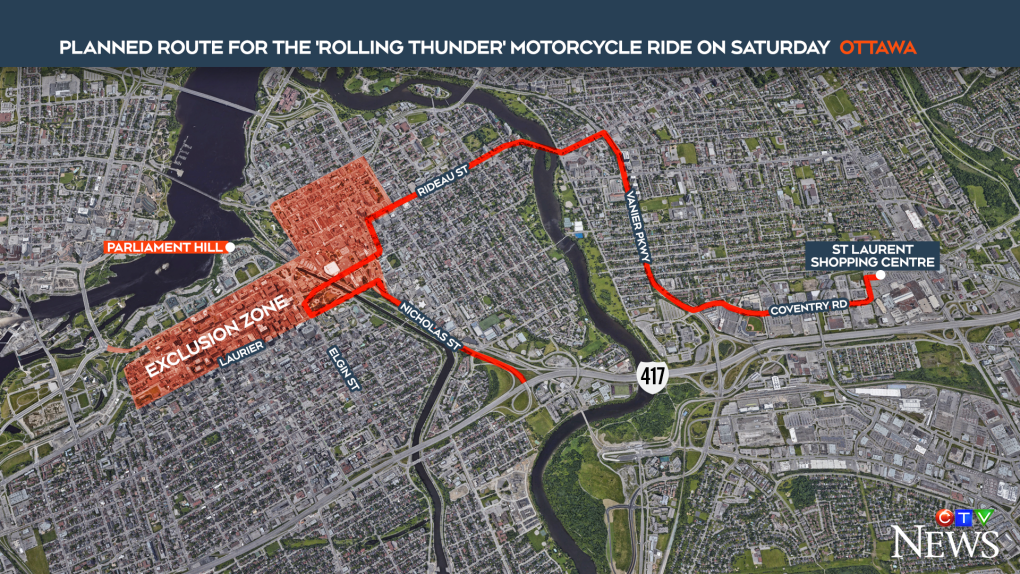 Ottawa Mayor Jim Watson told CTV's Your Morning on Friday that he has "great confidence" the "Rolling Thunder" convoy will not become an occupation of the area.

"We've had much more time to organize this activity as opposed to the trucker's convoy, and we also have I think, a sense from even the bikers that what happened with the trucks was unacceptable in anyone's neighbourhood," Watson said.

He added that the "days of warnings are over" and protesters will be held to account if they break bylaws.

"People are free to come and protest, but we're not going to stand for people defecating on the street or dancing on the Tomb of the Unknown Soldier," Watson said.

Speaking to reporters after a Liberal cabinet meeting in Ottawa on Tuesday, federal Public Safety Minister Marco Mendicino said the effects of the "Freedom Convoy" protests and blockades are "still very fresh" in the minds of the city's residents, "where people's lives were completely upended."

He said that tools and resources are in place to prevent a similar situation from happening this weekend.

"We place our confidence in law enforcement to uphold the law, respect the right to lawful protest, but do not want to see anything in the form of an illegal occupation again here in Ottawa."

Ottawa city councillor Catherine McKenney told CTV's Your Morning on Wednesday what happened last time with the "Freedom Convoy" was a "debacle" and "failure" by the federal government, city and police.

"This time there is planning that's gone into this in advance," McKenney said.

"There is a recognition that the ‘Rolling Thunder,’ the motorcycles coming into the city, cannot illegally park anywhere, cannot set up camp anywhere, that every law and bylaw will be immediately applied as this unfolds over the weekend," McKenney said.

The February occupation -- which ended after the federal government invoked the Emergencies Act for the first time and hundreds of police officers moved in to disperse the crowds, making dozens of arrests -- disrupted traffic, closed businesses and led to complaints of harassment, intimidation and hateful conduct.

Watson said on Friday that kind of behaviour will not be tolerated this time around.

"Come and protest, use your voice but be respectful of our communities," he said.

With files from CTV Ottawa and The Canadian Press