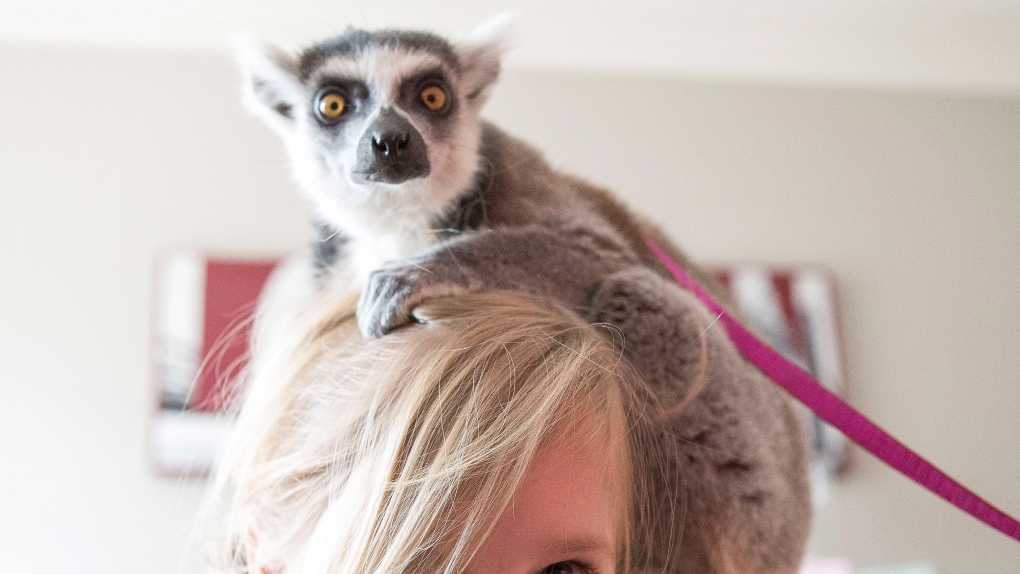 A lemur from an exotic animals company is seen at a child's birthday party in Toronto in this 2013 photo. So-called mobile zoos, which take animals on the road for events ranging from church picnics to corporate functions, have begun cropping up with increasing regularity and amid minimal oversight. (THE CANADIAN PRESS / Chris Young)

TORONTO -- Shannon Geldart does not remember what kind of snake it was, only that it stretched further than the width of her Toronto home.

As the metres-long reptile settled on the laps of a dozen children and some parents, she said she felt no fear -- just excitement over the success of her four-year-old son's birthday party.

The kids were instantly captivated by the snake and an array of other exotic animals, including a parrot, a lemur and a rat brought in by Hands-On Exotics, a Toronto-based company that she hired for the pirate-themed party.

The up-close contact with the snake left a lasting impression on everyone, Geldart said, adding parents approached her years after the 2013 bash clamouring for the company's contact information and reminiscing about how much they and their children loved the event.

Geldart said any concerns she may have had about using animals for entertainment were allayed by the stated mission of Hands-On Exotics, which purports to rescue animals not born in Canada and find them new homes.

"Obviously (the animals) being in their native habitat would be optimal, but I do feel like they're being well taken care of," she said.

Industry watchers take a much dimmer view of such companies, which they acknowledge are on the rise across the country.

So-called mobile zoos, which take animals on the road for events ranging from church picnics to corporate functions, have begun cropping up with increasing regularity and amid minimal oversight.

The Ontario SPCA, for instance, indicated it only has five such operations registered in the province, but a list compiled from industry watchdog Zoocheck Inc. shows more than 50 have popped up over the past few years.

Executive Director Rob Laidlaw said at least eight new mobile businesses have set up shop in Ontario in the past six months alone.

Some of them, including Hands-On Exotics, have earned accreditation from the Canadian Association of Zoos and Aquariums, the self-regulating body that certifies animal facilities based on a set of criteria developed internally. Other accredited CAZA members, which all pay mandatory minimum annual dues of $5,600, include facilities such as Marineland and the Edmonton Zoo.

Mobile animal businesses are relatively easy to establish across the country, Laidlaw said, since amateur operators need nothing more than a website and a collection of easily obtained exotic creatures to get up and running.

Nor do aspiring businesses need to worry about rigid enforcement in most cases, Laidlaw said.

Toronto, for instance, maintains a 23-category list of prohibited animals that those without CAZA registration are banned from keeping. Yet the city only convicted four people of violating its prohibited animal bylaws last year, one of which was later withdrawn.

So far this year, the city says it has issued one summons that got cancelled.

Laidlaw views mobile zoos the way he regards most businesses that focus on animals as their primary commodity -- with open skepticism.

Those risks, Laidlaw said, are significant. Exposure to disease is a concern since many exotics harbour contagions that do them no harm but put humans at serious risk.

Animals who are not adapted to endure significant human contact may also lash out in unexpected ways, such as the tarantula who fired microscopic barbed hairs into the eye of a toddler at a Toronto birthday party in 2013.

Hands-On Exotics, which brought the tarantula to that event, did not respond to repeated requests for comment.

The Toronto-based company objects to being described as a mobile zoo, identifying itself as shelter for rescued animals that pays for their care by offering outreach services in fields ranging from "pet therapy" to "educational outreach."

Demand is great for these shows, according to company co-founder Delivis Niedzialek, who added the company was on track for 3,500 bookings in 2016 alone. Niedzialek said he left the company this week for personal reasons.

Critics say animals, too, may find themselves in harm's way since there are so few regulations governing the conditions under which they both live and travel.

CAZA Associate Director Greg Tarry said the association has inspection guidelines governing the facilities in which animals live full-time, as well as a set of criteria for longer-term exhibits held further afield.

While CAZA has general guidelines governing transport, Tarry said there are no specific rules dictating how long animals are allowed to stay on trucks when they travel on short trips, he said.

Between 70 and 80 per cent of accredited members have some sort of off-site component to their programs, but Tarry said CAZA only needs to be notified if a company plans to keep animals on the road for multiple days at a stretch.

Tarry said the organization is re-evaluating its accreditation criteria to account for a noticeable spike in the quantity and popularity of mobile zoos.

Laidlaw said business operators seem quick to forge ahead without addressing concerns about their prospective moneymakers, but adds customers seem equally willing to pay up.

The film and television industry too can turn tidy profits from exotic animals, Laidlaw said, adding animal providers can charge from $2,000 to $10,000.

Such companies are a growing concern to the British Columbia SPCA, which has authority to enforce some of the most stringent animal welfare protection measures in the country.

Those measures, however, don't apply to the film and television industry, according to Chief Scientific Officer Sara Dubois.

She said the provincial regulations include a loophole that allows companies to apply for short-term permits to bring exotics into the province.

This leaves Dubois with concerns as to how animals are treated on and off the set.

"There are no national guidelines or standards for how to keep animals in the film industry," she said. "...Unless we get a cruelty complaint, we can't enforce proper animal husbandry, let alone welfare issues."

Such issues lie at the heart of why one company operator decided to overhaul his business model to do away with animal travel.

While he felt confident that the chinchillas, tortoises and other animals he brought on the road were well attended to, his memory was haunted by other sights and stories -- like the time a fellow operator allegedly forced a wallabee to perform with a broken leg.

In March, while standing on stage looking at crates full of his own animals, Mathias said it felt like exploitation.

"I kept looking at animals in bins, and I just kept thinking, 'I'm a hypocrite,"' he said. "'I can't do this. This isn't right.' After that I told (my business partner) 'whatever obligations we have, we'll fulfil, but we're cancelling everything else."'

Mathias isn't shutting up shop altogether. He'll sell exotic animals to select pet stores and sell food for exotic animals, and says he still sees real value in allowing the public to interact with uncommon creatures in a controlled way.

Educational efforts sometimes take dramatic form, like the time Mathias worked with Nicole Reely, of Windsor, to confront her arachnophobia. She'd suffered from it for years, causing the 42-year-old her to lie awake in terror at night and forbid her family from opening any windows.

But at the urging of her daughters, Reely decided to let Mathias help. Fighting down nausea and sweating profusely, Reely agreed to close her eyes and allow Mathias to place a live tarantula in the palm of her hand.

A few minutes later, she felt safe enough to open her eyes and look directly at the creature that had haunted her nightmares for years. Those nightmares, she said, have dramatically decreased in number and intensity over the past year.

"A lot of times, this is the only way in which some people are exposed to animals or reptiles or amphibians," she said.

CAZA agrees, introducing a policy earlier this year sanctioning "the use of animals in educational programming."

The broad policy gives the green light to outreach efforts including those that take animals on the road for both short and long trips.

Laidlaw, however, believes that businesses that call themselves educational facilities are only sanitizing animal exploitation.

"They've said it for a long time and people have come to believe it," he said, "but that doesn't make it true."