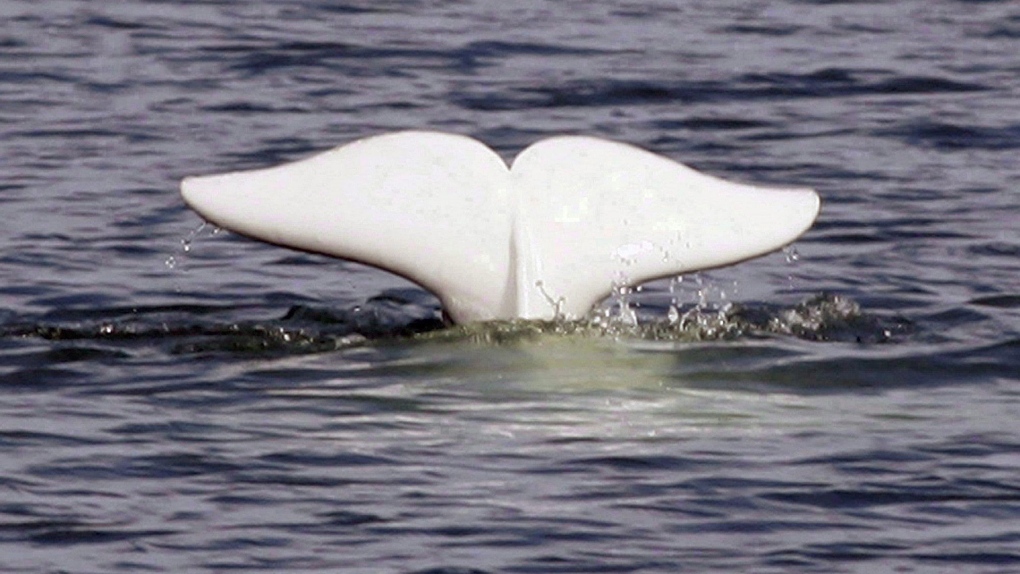 A beluga whale shows its tail in the St.Lawrence River near Tadoussac, Que., Monday, July 24, 2006. THE CANADIAN PRESS/Jacques Boissinot

MONTREAL -- Researchers in Quebec are hoping a computer simulator that resembles a video game can help save the endangered St. Lawrence beluga whales.

The project, which received funding from the provincial government this week, allows scientists to input known data about both whales and ships to see how they'll interact under different conditions.

The model allows researchers to test out different scenarios by adjusting the number of whales, as well as factors such as ship speed and engine volume, to find the best way to minimize risk, according to the professor in charge of the study.

"From a visual standpoint, it looks like a video game," Clement Chion, professor at l'Universite du Quebec en Outaouais, said in a phone interview.

"You see the St. Lawrence and the Saguenay rivers in 3D, where each whale is represented as a separate entity, and each boat as well, and we move them around according to rules based on real data gathered on boat and whale behaviour."

Chion said the simulator was originally developed about 10 years ago in order to minimize collisions between large whales and ships.

Now, the team is working to add a new dimension that will allow them to calculate each ship's "acoustic footprint" to figure out how to reduce the impact of engine noise on the sensitive mammals.

It will also add data about belugas, which have highly-developed social behaviours and a "much more complex use of their habitat" than the large whales that were originally included in the simulator, he said.

The project received a $2.1 million investment from the Quebec government this week -- enough to cover its operating costs for the next five years.

Researchers will also hold consultations with marine industry stakeholders, whose co-operation Chion says is needed in order to save sensitive whale populations.

Fisheries and Oceans Canada will provide data on boats and acoustics, while the data on beluga whales' swimming, diving and behaviour patterns will be provided by the Quebec-based Group for Research and Education on Marine Mammals.

Robert Michaud, the marine group's director, said more research is needed to understand exactly how sound levels affect the endangered belugas, whose numbers were last estimated at around 900.

He said scientists have long hypothesized that noise pollution from shipping can have an impact on the whales, who use sound to communicate, navigate, and hunt.

"When we invade their habitat with more noise, we're shrinking their acoustic habitat and maybe reducing their ability to find their food," he said.

He said the simulator should help scientists understand how much time the whales spend in the acoustic footprint of each boat -- and evaluate whether policies such as adjusting boat speed could make a difference.

He said the research has taken on more urgency as the Quebec government works to develop its maritime strategy, which could substantially increase boat traffic in the St-Lawrence.

At heart, he said, the goal of the simulator is to help scientists, government, and the marine industry find ways to reduce the impact of this traffic on marine mammals.

Michaud said that will mean tough choices, comparable to the fishery closures that have been put in place in Atlantic Canada to try to save the endangered North Atlantic right whale.

"Do we want to maintain our fishing industry and go on the same way we've been doing, which we know will probably send the right whales down the drain very rapidly, and if not, how can we improve that?" he said.

"We have the same situation with the St. Lawrence beluga whales."