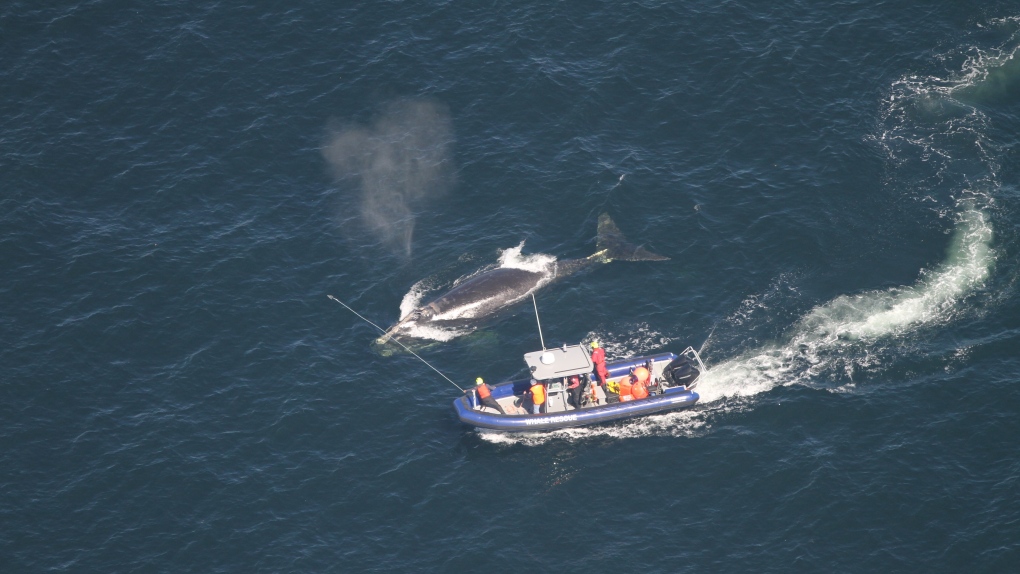 Crew members attempt to disentangle a whale in the Gulf of St. Lawrence in a handout photo. (THE CANADIAN PRESS/HO-Alison Ogilvie, NOAA Fisheries MANDATORY CREDIT)

GULF OF ST.LAWRENCE, Canada - Experts will try to free an 18-year-old right whale who has been tangled in fishing gear in the Gulf of St. Lawrence for at least two weeks on Sunday.

Philip Hamilton, who works at the New England Aquarium, says a team from the U.S. National Oceanic and Atmospheric Administration attached a tracker to the whale on Friday.

The animal, known as 3125, was first seen entangled in the gear on July 4 by a Transport Canada Plane east of the Gaspe Peninsula in Quebec.

The plan, Hamilton says, is for the Campobello Whale Rescue Team to disentangle the whale on Sunday.

News that the whale had been identified comes after the Department of Fisheries and Oceans announced on Friday two more whales were found dead, bringing the total number of deaths this year to eight.

Right whales are highly endangered, with only about 400 left on the planet and deaths outpacing live births.