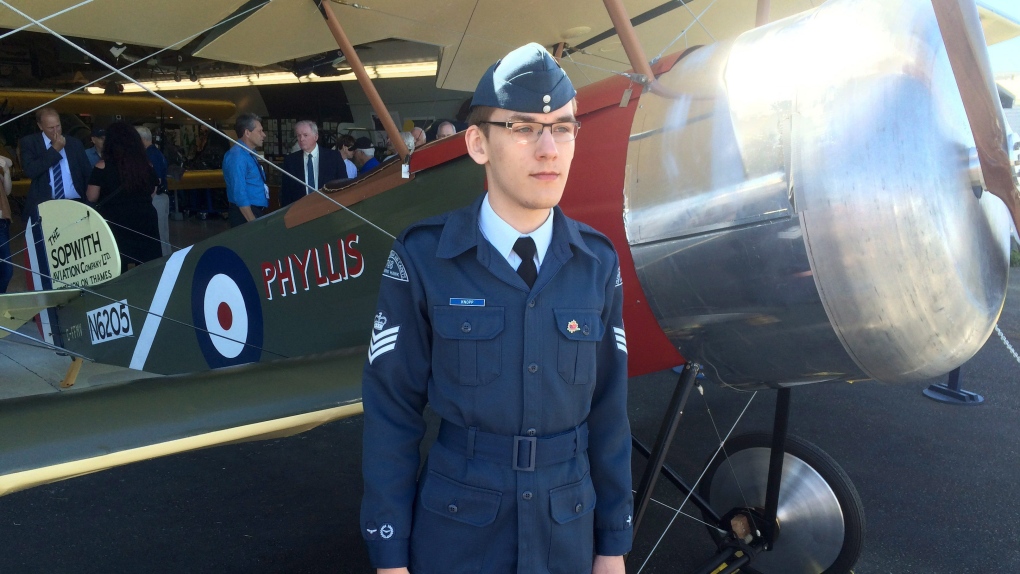 LANGLEY, B.C. -- When air cadet Richard Knopp was helping to build a replica First World War biplane with other volunteers, he imagined what it was like to sit in the pilot's seat 100 years ago.

Knopp learned to fly a modern aircraft last summer and the 18-year-old realized his predecessor's cockpit was much more narrow and lacked a glass shield, leaving the pilots with nothing but goggles for protection.

"It's hard to imagine doing that. You stick your head out the window of the car and you feel that (air), then imagine going twice as fast and 3,000 feet up. How's the wind up there going to feel?" he reflected while gazing at the biplane inside a Langley, B.C., airplane hangar.

Knopp joined other volunteers Friday for the unveiling of one of two replicas they constructed as part of a First World War commemoration project called Wings of Courage.

A squadron of former Canadian military pilots is planning to fly the biplanes over the Vimy Memorial in France next year, on the infamous battle's 100th anniversary. The pilots are honouring Canada's heroism and loss in a bloody clash that saw more than 10,000 Canadians killed or wounded in April 1917.

"We want Canadians to pay close attention to the sacrifices that were made 100 years ago," said Tim Joyce, president of Sound Venture Productions, which partnered on the project with the Royal Canadian Geographical Society. It was funded in part by the federal Department of Canadian Heritage.

"We have a whole generation of Canadians who have no living memory of the First World War. Our project is aimed at creating a legacy ... to resound through generations from here on in."

The primary role of the fighter pilot during the First World War was to protect reconnaissance planes passing over enemy lines to collect intelligence for maps, he said.

Joyce announced that the groups were gifting the fully functioning replica 1916 Sopwith Pup biplanes to the Canadian Museum of Flight in Langley. A large garage door lifted slowly to the skirl of bagpipes, revealing the red-and-green painted craft to a small crowd of enthusiasts. Two separate small planes soared above the tiny airfield in celebration.

About 20 adults and six teenaged Royal Canadian Air Cadets are still constructing the Pups, named Phyllis and Betty after two sisters of Joe Fall, one of the historic fighter pilots.

They are replicas of the planes that the pilot from Nanaimo, B.C., flew when he was recorded as shooting down 36 planes during the war.

"The story that we got was the pilot was always accused of being a womanizer, and of course he went along with the story and wouldn't admit they were his sisters," lead builder Ray Fessenden said with a chuckle.

Fessenden, a helicopter mechanic, said it took a lot of time and head scratching to build the copies, because the team began with only a very basic structure obtained in Missouri. Parts, including aluminum tubing and sheet metal, were trucked to B.C. last November, he said.

The originals were mostly made of wood and the design itself was simple, he noted.

Fessenden, 72, said he plans to travel to Vimy next year if his health holds up.

"I'll just be happy to see these things flying. It's the satisfaction of being a Canadian," he said.

"These were flown by Canadian pilots and I look at the sacrifice that was made in that area in World War One. I think, 'Would I want to be there? Absolutely not.' So (I'll feel satisfaction) just in recognition of those guys who were there."