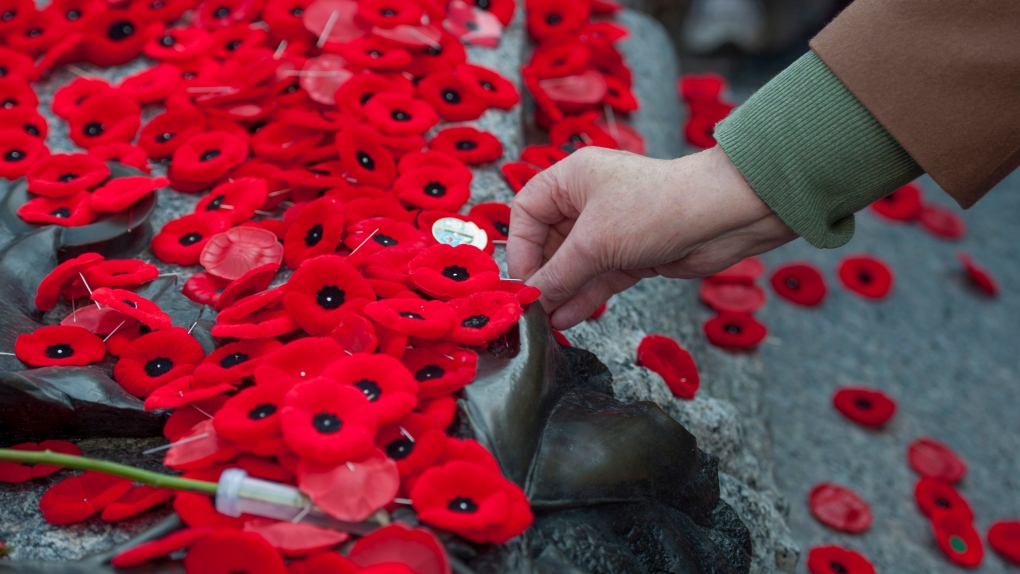 People place poppies at the Tomb of the Unknown Soldier following the Remembrance Day ceremony at the National War Memorial in Ottawa on Tuesday, Nov. 11, 2014. (The Canadian Press/Justin Tang)

CALGARY -- A wartime art project that was inspired by Group of Seven artist A.Y. Jackson and was meant to bolster the morale of Canadian troops in the Second World War is on display at The Military Museums in Calgary.

The silkscreens, featuring various scenes of Canadiana, were sent across Canada, to England and parts of Europe for soldiers to hang in their quarters.

"They're making silkscreens of Canadian images to show to the soldiers, to remind them what they're fighting for, and offer them a little comfort and some beautification of their living quarters and offer some level of propaganda as well," explained Lindsey Sharman,

curator of the University of Calgary's Founders' Gallery at the museum.

"The initial idea behind the project came from A.Y. Jackson. He was a war artist in the First World War, but by the time Canada enters the Second World War, he's too old to enlist and not able to go on to the front lines as he probably would have hoped."

At the time, artists were limited to going to the front lines as a war artist or to be involved in producing art for Victory Bond posters to help raise money for the war effort.

"A.Y. comes up with this idea that really bridges this huge divide," Sharman said.

While the art was initially intended for soldiers during a time of conflict, it became popular afterwards for display in Canadian banks, schools, libraries and other public buildings.

Silkscreening is a printmaking technique in which a mesh cloth is stretched over a heavy wooden frame. The design, painted on the screen or affixed by stencil, is printed by having a squeegee force colour through the pores of the material in areas not blocked out.

About 100 of the silkscreens are on display at the museum. Sharman said they are extremely rare and are valued at between $3,000 and $12,000 each.

The display is not without a note of controversy. One of the silkscreens is "Potato Pickers" by Fritz Brandtner, a German-Canadian artist who immigrated to Canada in 1928. It depicts five women with their heads covered and a man, in a straw hat, picking potatoes.

"It was highly criticized in particular because these individuals did not look Canadian enough," Sharman said. "Brandtner's reply to that was: These people were not born in Canada ... but these are Canadians. This is the Canada that we have now and this is the democracy that they are fighting for."

"Potato Pickers" was eventually produced, but Brandtner was unable to find corporate sponsorship and had to rely on a private investor to support the project.

"What is so interesting about this piece is those are issues that we are still grappling with in Canada today," Sharman said.

The exhibition, Barracks to Banks: Canadian Silkscreens for War and Peace, is on display until January.