Refugees face delays in attempts to seek status in Canada 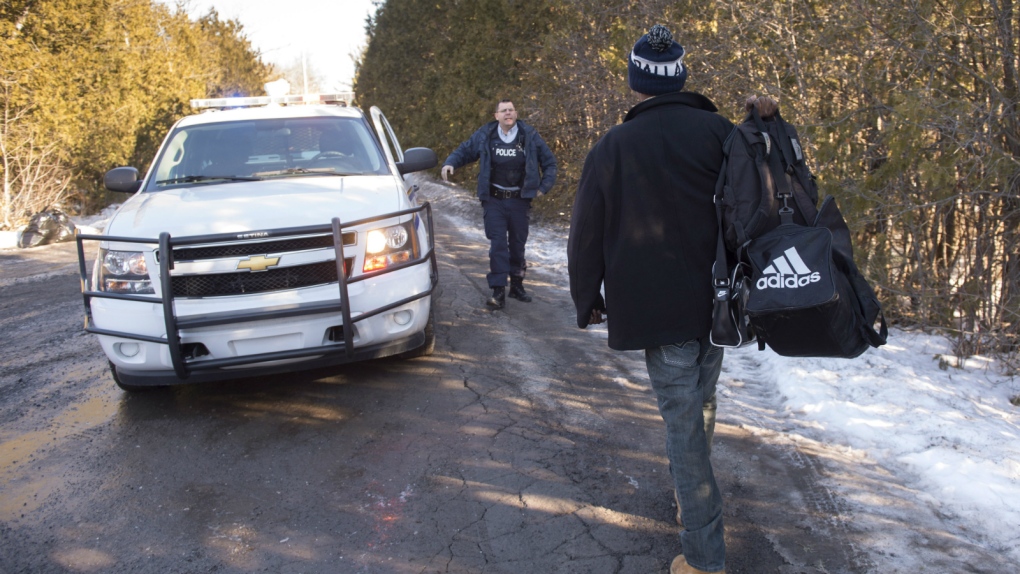 A refugee claimant from Mauritania is greeted by an RCMP officer then arrested after crossing the border into Canada from the United States near Hemmingford, Que. on Monday, Feb. 20, 2017. (Paul Chiasson / THE CANADIAN PRESS)

MONTREAL - For many asylum-seekers crossing from the United States into Canada, Roxham Road in the small Quebec town of Hemmingford represents the first steps of a potential new life.

But their journey is just beginning as they start to navigate the complicated process of seeking status in Canada.

In recent weeks, more and more people have flowed illegally across the border into Canada as U.S. President Donald Trump moves to crack down on illegal immigration and imposes new restrictions on refugees.

The tactic is a way to avoid the Canada-U.S. Safe Third Country Agreement, which prevents most people who have been living in the United States from making a refugee claim at an official border crossing on the premise they are already somewhere safe.

By crossing illegally, they're able to make that claim in Canada.

"In some cases, these people have family or friends in the community in Montreal, in other cases they'll head to Toronto or they'll go to organizations that deal with asylum-seekers like the YMCA," said Montreal immigration lawyer Stephane Handfield.

Federal authorities first take them to a Canada Border Services Agency building in nearby Lacolle, Que., where they are processed and can file a refugee claim.

"There's no doubt it's touching, so we try to make their misery as short as possible," RCMP Staff Sgt. Brian Byrne told reporters in a briefing at the border this week.

CBSA officers can detain them for three general reasons: they are deemed a threat; they don't have proper documentation to confirm their identities; or there is a compelling reason to believe they won't show up for a hearing before the refugee board.

In cases of detention, they are seen by an Immigration and Refugee Board commissioner within 48 hours, Handfield said.

"But most are freed because most don't present a risk to Canadian society - as we've seen they are often young couples with children, and almost all have proper documentation confirming their identities," Handfield said.

Otherwise, they are interviewed and fingerprinted before filling out several forms. The vast majority are released on a promise to appear at a hearing to be held within two months.

But that process has been hindered by delays in Montreal and Toronto. Handfield said a lack of commissioners and CBSA agents to handle security checks means cases are often put off.

"I think the status quo for the federal government isn't an option," he said.

In January, 452 people claimed asylum at Quebec border crossings alone, sometimes spending thousands of dollars and taking great physical risks to get across.

"All the more reason to eliminate the Safe Third Country Agreement, because presently with these rules, people are forced to cross the border illegally and the big winners are the unscrupulous smugglers who are pocketing thousands of dollars," Handfield said.

Janet Dench of the Canadian Council for Refugees says the number of illegal crossings could grow with warmer weather.

"I think a lot of communities are in the process of thinking about that and looking to see what support they can get from different levels of government," Dench said.

"Unfortunately, although the federal government has the responsibility under the Refugee Convention to protect refugees, it doesn't provide any funding to organizations that provide basic services to refugee claimants to help them negotiate a complex and difficult claim process."

A number of Canadian cities are mulling adopting designations as so-called "sanctuary cities" joining Toronto in 2013 and Montreal, which passed a motion to that effect on Monday.

But in terms of services, there is very little available to the newcomers. They can get federal health care only when their refugee claim is deemed eligible. Some provinces provide legal aid for immigration attorneys and some refugees can get a work permit, which can take a few months.

"A lot of the services that refugee claimants depend upon are financed by faith communities, private donors (and some) limited funding from municipalities or provinces," Dench said.