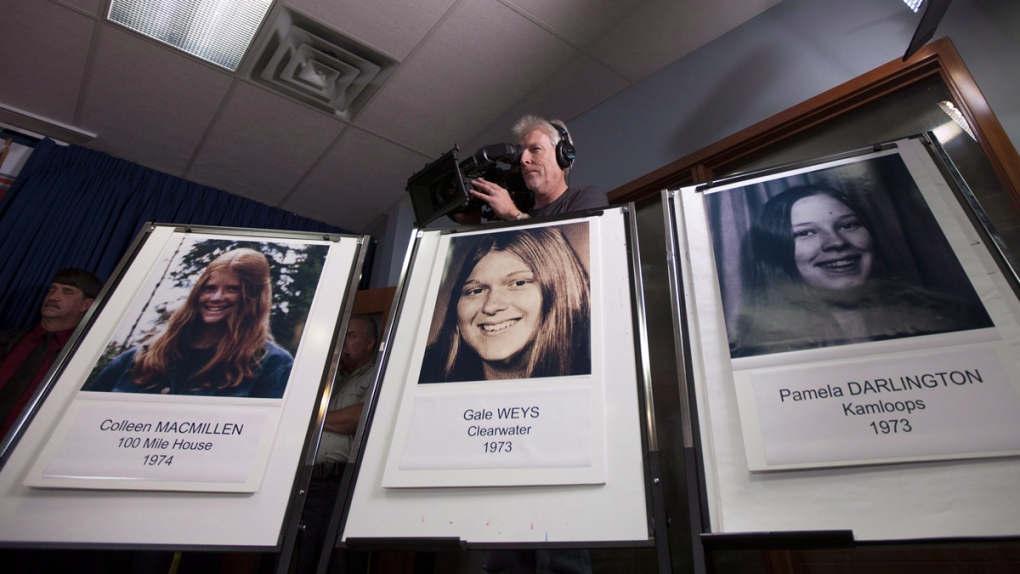 Media film pictures of some of the victims of the E-PANA investigation during an RCMP news conference in Surrey, B.C., Tuesday, Sept. 25, 2012. (Jonathan Hayward / THE CANADIAN PRESS)

VANCOUVER -- The RCMP's highest ranking member in British Columbia warned the provincial government last year that cutting the force's budget would hamper its ability to investigate missing and murdered women along the so-called Highway of Tears.

The Mounties launched its E-PANA task force in 2006 to determine whether a serial killer was operating along the Highway 16 corridor in the province's north. It was eventually assigned 18 cases involving women or girls who vanished or were found dead in the region.

The RCMP and the B.C. government confirmed last year that six officers were cut from the E-PANA investigation, which had already seen previous budget reductions.

In the spring, RCMP Deputy Commissioner Craig Callens -- the commanding officer for the province -- sent a memo to the province's director of police services outlining the potential impact of the cuts.

"The termination of funding for project E-PANA would impair the ability to effectively conduct historical homicide investigations within (B.C.)," Callens wrote in the June 4 memo, which was released through a freedom-of-information request.

"At present, the loss of resources in project E-PANA would result in no other Highway of Tears historical homicide investigations being undertaken for the foreseeable future."

Sgt. Annie Linteau of the RCMP said in a written statement that 12 officers are currently assigned to the investigation, along with support staff. At its height, the investigation had about 70 officers.

"While the number of investigators has been scaled down, we have the resources necessary to deal with the investigative needs at this time," she wrote.

B.C. Justice Minister Suzanne Anton did not make herself available for an interview. The ministry said the RCMP was consulted about budget reductions and it's up to the force to make decisions about how to allocate resources.

A table released through another freedom-of-information request last year indicated the budget for E-PANA fell to $1.8 million for 2012-2013, from about $5 million in previous years.

The first major break in the case happened in 2012, when investigators said they believed a dead American convict was responsible for killing as many as three of the women.

Last December, the Mounties announced murder charges against a 67-year-old Ontario man in the death of 12-year-old Monica Jack, who disappeared from Merritt, B.C., in 1978.

The Highway of Tears was examined at the public inquiry into the Robert Pickton case, known as the missing women inquiry, and commissioner Wally Oppal's final report made several recommendations to make the area safer. The notorious highway is frequently cited by groups calling for a national inquiry into missing and murdered aboriginal women.

In a version of Callens' memo marked "draft," he suggested the budget cuts could have consequences beyond the Highway of Tears investigation.

"There has been significant focus in the media on the investigation, both by the missing women's inquiry, United Nations groups in Canada and calls for a national inquiry on murdered and missing women," Callens wrote.

"British Columbia has been able to champion itself as a province that is committed to a serious improvement in these types of investigations. Negative press will create the erosion in public confidence and there will be the loss of best practices."

The passage is absent from other versions of the memo and it's not clear whether it made it into the final document. Neither the provincial government nor the RCMP would provide the memo as it was sent.

A separate memo sent by Callens in July predicted the staff and budget cuts to E-PANA "may attract some media attention and public comment over time, including comment from families associated to project E-PANA."