RCMP puppy in training dies after eating rope and rocks 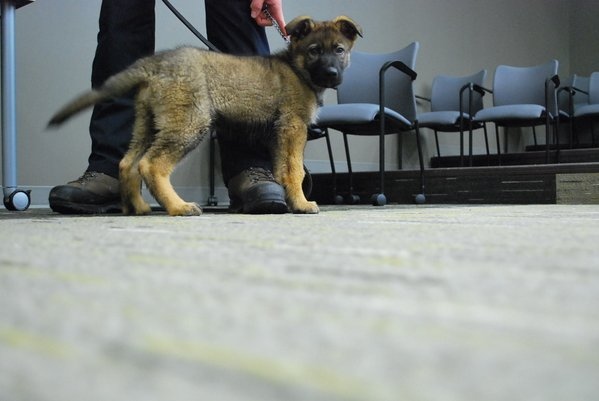 The RCMP in Halifax announced Tuesday that Helo the puppy has died after ingesting rope and rocks.

HALIFAX -- An RCMP plan to document the lives of two German shepherd puppies during their training has ended sadly for one of the canine recruits.

The Halifax division announced Tuesday one of the pups -- Helo -- has died after ingesting rope and rocks.

Const. Mark Skinner says the accident occurred as the puppy pursued his natural tendency to chew on objects.

Helo was the more vocal and bouncy of the two pups that captured many hearts when they appeared before the media four weeks ago as examples of the training program.

Skinner says when Helo ate the rope and rocks it caused scarring of his intestines, and the damage couldn't be repaired despite three surgical procedures.

"Anyone who has had a puppy knows that puppies can put a lot of things in their mouths. That's how they explore and grow as a dog," said Skinner.

"It's just unfortunate that these items caused him such an issue."

He said as a dog owner himself, the incident has made him all the more aware of the importance of carefully monitoring what objects a puppy might have access to.

Helo was born on Oct. 4 at the RCMP dog training centre in Innisfail, Alta., and came to live in Bible Hill, N.S., with the goal of being accepted into police service dog training.

Skinner said trainers attempt to spend as much time as possible with the dogs, but it's impossible to watch them constantly.

During the media launch of the two puppies on Dec. 18, the RCMP officers training them said the dogs live at their homes.

Const. Tim Reid, Helo's trainer, had said that every two weeks he and the puppy took part in a six- to eight-hour training day that included a heavy focus on tracking skills.

In a few more months, had Helo lived, a fully trained dog handler would have assessed the dog's progress.

Reid said Helo was the sixth puppy he'd trained and that only one had graduated to become a police dog.

One of the others died of a heart attack, another returned to Innisfail to breed and two others were sold as pets.

Reid had said there are about 80 people like himself across the country who are in training to make it into the RCMP dog handler program in central Alberta.

An RCMP news release said Reid was saddened by the loss, and noted that condolences can be shared on the force's Facebook page in Nova Scotia and on Twitter using the hashtag RIPHelo.

The force sent its thanks to the Truro Veterinary Hospital and the University of Prince Edward Island Atlantic Veterinary College for care and support provided to the dog.

Skinner said that since the dogs gained such a high profile, he felt a news release should be issued on the death.

"It would be inappropriate to not do so," he said.

He said that progress reports will continue to appear on Hamer on Twitter and on Facebook at www.facebook.com/rcmpns.