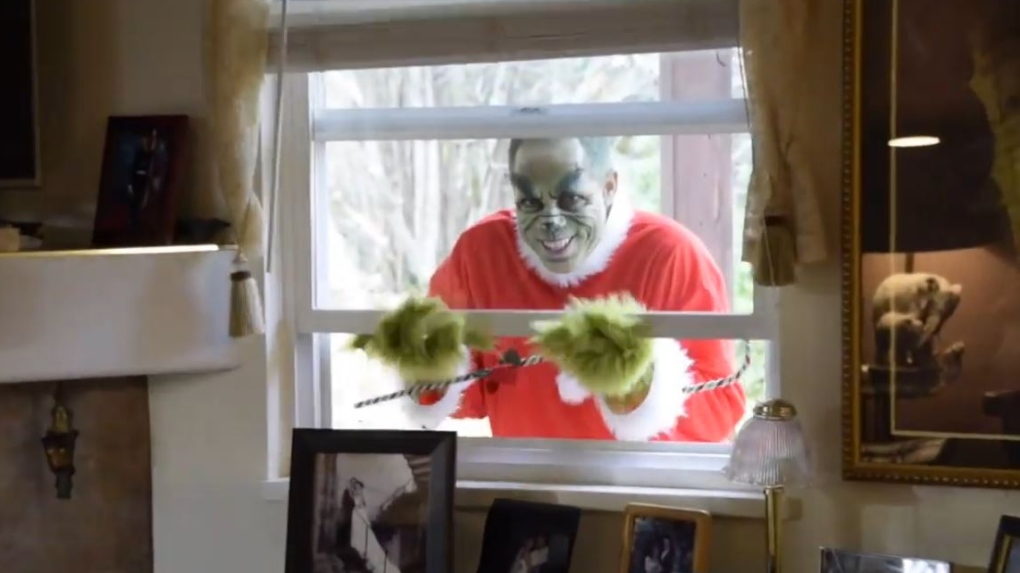 RCMP officers in B.C. have gone viral for their Christmas-themed, crime prevention Facebook video, which features one of them dressed up as Dr. Seuss’ classic Grinch character. (Ridge Meadows RCMP/ Facebook)

TORONTO -- RCMP officers in B.C. have gone viral for their Christmas-themed, crime prevention Facebook video, which features one of them dressed up as Dr. Seuss’ classic Grinch character.

Ridge Meadows RCMP’s video, which features Cindy Lou and the titular character from “How the Grinch Stole Christmas!” has garnered more than 214,000 views since being re-posted on Dec. 2. The original video was posted around Christmas of last year.

The playful caption for the short film states that the officers took a “dash of teamwork, a splash of crime prevention messaging, spice(d) it up with some humour, (and) add(ed) a tablespoon of Christmas cheer.”

RCMP detachment superintendent Jennifer Hyland told CTVNews.ca in a phone interview, “we’ve never seen anything in policing get shared like that.”

When she began leading the RCMP detachment in 2017, she really wanted to use social media to reach her community.

“The safety messages on (computer) use and safety are only as valuable as how many kids you can reach,” she said.

The Facebook post also includes a lengthy Dr. Seuss-style story, involving the Grinch’s “sinister plot” to stop Christmas. And although the delivery is playful, the RCMP has a serious message behind it.

For example, the Grinch attempts to send inappropriate private messages to Cindy Lou, but she blocks him and tells an adult.

The thwarted Grinch then heads to a bar with his pet, Max the dog, where he tells himself: “I’ll steal and I’ll rob, and I’ll make such a fuss, breaking into Who people’s homes and take Who people’s stuff.”

Eventually, the video ends with the Grinch turning away from his “Grinch-y” ways.

“Even Grinches can change, and be kind and good hearted,” the video states. Hyland pointed out that too many people in her community are victims of preventable crimes such as impaired driving, so she wanted to make a creative safety video that didn’t shy away from tough issues.

Two years ago, she decided to bring in a larger team to help with larger outreach projects and this included civilian support staffer Clint Van Blanken, who’d go on to help produce the Grinch video.

He said the genuine enthusiasm from the top brass “just kind of organically flowed through the detachment.”

Hyland said that officers were tripping over themselves to appear or be a part of the video concept. Ultimately, Insp. Aaron Paradis won the role of the Grinch with dozens of RCMP detachment officers and employees popping up in the video.

“It’s not a hard sell, it’s more likely explaining (to officers left out) why we had to limit the number of people involved,” Hyland said. Van Blanken said, “the response from both the (RCMP) membership and the community has been overwhelming positive.”

Dozens of comments – including some as far as New Zealand -- have praised the fun way the officers used the Grinch to talk about several important issues.

“My inner child is delighted by this Christmas message! Thank you all for this bit of fun,” one person wrote.